Fragments Against Reparation
thoughts on anti-Blackness and Black liberation

Some Theses Against And Beyond Reparations

For the non-Black people

This text is written with the intent to provoke critical discussion about reparations. Most of the criticisms of reparations that have been circulating have come from an anti-Black and often pro business as usual perspective. This text, instead, aims to criticize reparations as a way of moving towards Black liberation.

Oppression of Black people is as old as (and synonymous with) the American economy. Since day one it’s been insult, indignity, and death for Black people here in the USA. Our history here is a history of getting ripped off over and over again, for centuries. The society we live in is built on Black suffering, literally and figuratively.

More and more lately, people are discussing reparations for Black people. Some people think we — Black people — should get paid, as a way to fix all we’ve been through. The word reparation comes from repair, and the way we’ve been treated can’t be repaired. That’s too late. What has been taken from us is gone, maybe forever. We can move forward, but we can’t undo what’s been done to Black people. Getting some free money, land, or social programs from white people or the government is nice, but it’s not reparations.

How can someone pay us back when they haven’t stopped hurting us and taking from us? What kind of sick math can measure how much suffering costs? Is any amount of money, land, or stuff enough to make our ancestors rest easy? What kind of reparation could make sure anti-blackness stops and nothing like it ever happens again? How much money would it take to make you feel alright about how society treated and continues to treat Black people? Trying to put a dollar amount on this kind of thing is cruel and offensive.

Reparations aren’t going to make Black people free. The path to freedom is a lot more nasty and difficult than getting a check or a deed to some land, and a lot more dignified than begging and filing applications. We should think bigger and fight harder because Black liberation is too expansive to fit into something as narrow and limited as reparations. We can aim so much higher. We can consider what it is about reparations that won’t free us, and also consider better ways to get free as Black people.

Some Theses Against And Beyond Reparations

For the non-Black people

Disclaimer: The scenario described below is an incomplete and unfinished exploration of financial repair for Black people. The meaning of the word reparations below is stretched and distorted. The reparations in the scenario below are not freely given by (formerly/) anti-Black groups and individuals to Black people. Instead the word is used to mean any financially equalizing measure. It is not meant to cover social, psychological, cultural, spiritual, or other damages resulting from anti-Blackness. The reader is invited to imagine the reparations necessary to account for non-financial oppression of Black life. The scenario described is not meant to be a model to follow, rather it is a sarcastic one, one of many less than liberatory conclusions one could arrive at by imagining Black freedom via a hierarchical and economic perspective, such as reparations.

A commission of Black mathematicians, psychologists, economists, researchers, historians, lawyers, intelligence and security specialists, and other experts forms to do an in-depth financial assessment of the economic costs of Black people’s oppression and to publish financial measures that would enable reparation be paid to Black people. The commission is equipped with state of the art computers, a vast library of the least biased encyclopedias and history books on the planet, twelve floors in a skyscraper in Midtown Manhattan, and a near limitless budget. Satellite offices are opened in Paris, Rio de Janeiro, Dakar, Capetown, Panama City, Algiers, Moscow, Tokyo, Port-au-Princes, Kingston, and an undisclosed number of field offices are opened across the planet. The commission is given carte blanche to research as they see fit and secured against legal consequence.

Initially not much changes, black researchers are a common sight at archives and libraries, and canvassers and census workers continue to have the door shut in their faces. As weeks turn to months the research takes a dark turn. Subtle at first; young girls complain their diaries have pages torn out, some Western European nations report a slight increase in the thefts of laptops and cellar phones. Later backdoors are discovered in a couple large corporations’ computer networks. Politicians and police officers begin discovering hidden cameras and microphones in their cars and workplaces. Eventually white people begin disappearing, some turn up months later, some don’t turn up at all. Financial audits become increasingly common and aggressive, auditors arrive unannounced at 7AM accompanied by armed escorts who prove more than capable of violence. Americans reminisce fondly about the good old days of the Patriot Act. Anger grows as dissidents begin protesting the commission’s invasive and at times brutal information gathering campaign. The commission’s security forces thwart at least four attempted bombings of the Manhattan offices, attempts on the lives of researchers become commonplace and a number are successful. The research, however, continues.

Months become years. Atrocity becomes mundane. Thousands are scarred for life, mentally and physically, not counting members of the commission. Many researcher lose their minds. Not a few researchers have taken their own lives or been killed, a few have become mass murderers. New forms of racialized PTSD are discovered among the a significant portion of commission. The commission releases their financial assessment in six volumes and their economic reparation proposal in ten. The publishing is delayed; the first two publishing houses retained to print the documents buckle under pressure, and eventually go under as their worker go on strike. Both the assessment and the proposal are also made available for free online in PDF form.

A couple million white people are disappeared to ensure a more equal distribution of financial opportunity. All public and private grade schools are banned from teaching whites for the next two hundred years, universities are banned from teaching whites for the next four hundred years. During the four hundred year education ban, teaching a white to read or any knowledge deemed unnecessary for work is punishable by immediate asset redistribution of the teacher and cranially invasive surgery on the white to correct the learning. A three hundred fifty year moratorium on weapon ownership by white people is enacted, to be followed by a decade long review period and pilot program. The next dozen generations of white people are required to double their work output and forward all proceeds to black people.

Approximately one third of white people in Europe and the Americas are relocated all over the planet to undo generations of financial consolidation based in Black exploitation. Relocated whites are instructed to assimilate into local cultures despite being barred from paying employment and education, additionally in many places whites are forced to live on non-arable land. Local governments are strong-armed into outlawing all unauthorized or unsupervised gathers of more than two white people, permits are issued on an as-needed basis for work or the formation of family units. Un-permitted gatherings of whites are broken up, the punishment for possession or use of a false permit is summary beating or whipping. Cell phone and computer usage among non-Black people is only legal with the proper paperwork from an employer.

Latinx, Arab, and Asian people are subject to stringent financial history examinations, anyone unable to provide documentation that their assets come a source other than Black exploitation is drowned in debt. Global financial markets crash, thousands of CEOs and politicians are given forced lobotomies to prevent the financially anti-Black attitudes they have upheld from spreading further, most never recover their motor skills. All police officers are executed, including Black police officers. The production or sale of hip hop, rock, techno, house, blues, reggae, soul, R&B, and countless sub-genres by non-black people is criminalized. The labeling of any genre of music originating outside of Europe as “world music” is punishable by the seizure and redistribution of one or both eardrums of the accused.

A task force is created to phase out the use of the English language everywhere except the island formerly known as England over the next hundred years, task forces are also appointed to phased out the international use of French, Spanish, and Arabic. White riots and attempts at looting are met with the security forces using live rounds, the dead are buried in unmarked graves, their names meticulously scrubbed from all records to make difficult any accumulation of generational social capital or lateral social capital resulting from martyrdom. Assassinations of European heads of state with anti-Black financial policies becomes commonplace. Europe, Eastern Asia, and much of the Middle East descend into civil wars as new borders are drawn through longstanding ethnic and cultural groups. Black owned corporations move into the new nations and take advantage of the instability, cheap labor, and natural resources. 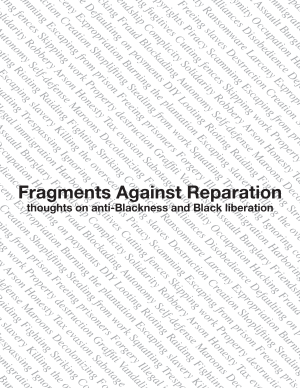