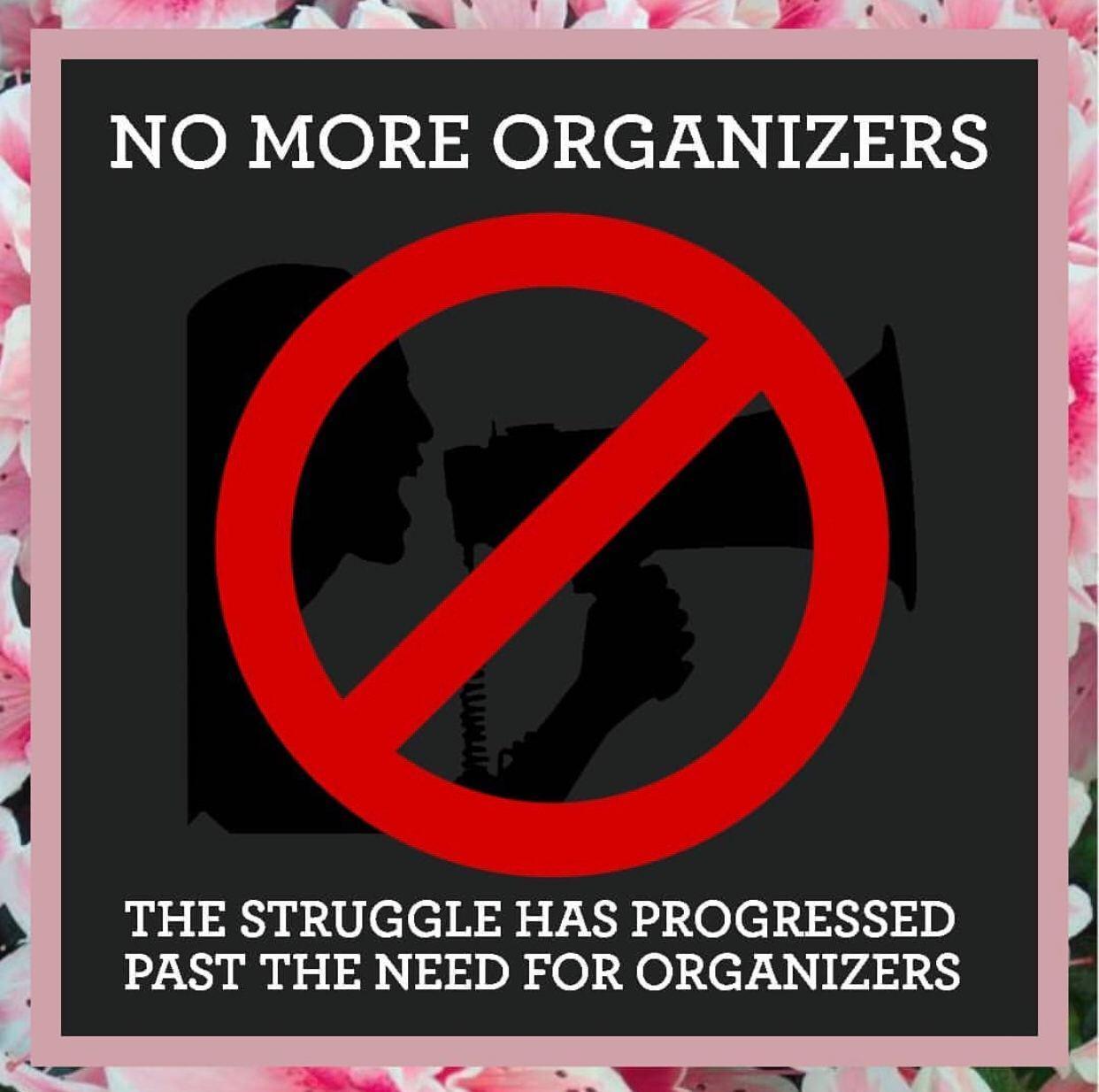 From abusers, clout chasers, careerists, and grifters to people getting thrust into a dangerous visibility, dehumanized, and overworked, the role of ‘organizer’ is detrimental both to the people who claim it/it’s thrust upon as well as the movement for liberation as a whole.

Freedom doesn’t need organizers, it needs everyone to take an active role in the fight and to refuse to put eachother on dehumanizing pedestals in the process.

We can’t wait for others to fight for our freedom. As always, the secret is to begin.

The role of ‘organizer’ is a specialized position, that is it is never something someone can just do but only a certain kind of person can do. Even in an ‘informal movement, it is a position that separates a ‘leadership’ from the struggle. Like all specialized roles, it creates a dynamic of spectatorship — rather than encouraging people to just do the damn thing and be active participants in the struggle for their liberation, it tells them to wait for the organizers to do everything for them, all they have to do is show up.

Even the best intentioned and most aware organizers perpetrate this because the issue is with the very position of the organizer — always separated from everyone and everything else. For the organizer to exist there must be people to be organized, not active participants making shit happen themselves.

More intentionally, organizers will hoard access to resources — money, tools, social connections — that they simply will not share. If they are a part of particular organizations, they will make the barrier to access entry into said organization where you will most likely continue to remain a spectator. To protect their position of power they will create a hostile environment around organizing, or lie about needing to be a particular kind of person or have particular kinds of skills to do it.

The truth is, anything organizers can do everyone can do, and for the sake of us and our freedom, as well as the well being of the organizers, we must do it and in the process knock them off their pedestals and make the irrelevant.

Organizers and leaders have a tendency to create both formal and informal hierarchies. No one person is so critically important to the struggle that without them it would all fall apart, but the culture built around organizers and organizing that puts them on a pedestal creates that illusion.

This creates a perfect set up for abuse of power (which is a constant when power is involved.) We’re sure most people have heard something similar to this before — Yeah what they did isn’t okay but they do such good work? When people are conflated with the struggle they are apart of accountability is nearly impossible.

The excuses are endless, ‘there’s too much going on right now, can we discuss this another time?/You’re just trying to delegitimize my work/this is COINTELPRO/ You’re an infiltrator.’ On top of that, the tendency to deify organizers creates a blind following that will defend them no matter what — it’s these dynamics that contribute to an entrenchment of racism and its apologism, of abuse and its apologism.

These positions are also a magnet for clout chasers, grifters, and wanna-be politicians building their resume on out backs. These sorts of people will put people in physical and legal danger to get that good instagram shot, or get donations to their fund, or they’ll disarm a situation so 5 years later when they are running for city council they can bring that point up.

Who gets to be an organizer? Much like ‘leadership, when the only way people know how to engage in struggle is by following, they will follow whoever steps up, politics or analysis be damned. This is seen most evidently whenever some random person shows up to a demo with a megaphone many people will instantly look to them because the megaphone (or the reflective vests, or the loudest voice) confers a level of legitimacy and before you know it you’re standing there being told well not all cops and that you need to go home and go vote.

The other side of this is people get thrust into organizer roles simply because they are doing something and with it comes a level of visibility, deification, overwork, looking to for answers and general dehumanization that is not asked for and people quickly burn out and disappear and people desperately search for a new sacrifice.

Those who ‘organize’ never coordinate and make everything happen, but they’ll take the credit for it. This falls strongly along class, racial, and gendered lines. Where there’s a well off organizer, you can bet it was poorer people doing the grunt work. Where there is a seemingly down ass man, there’s 10 women and gender variant/non-conforming people doing the grunt work and a lot more doing the informal emotional and care work. Where there is a white organizer, there is the backs of multiple black people running themselves ragged that they are standing on.

Even outside of this, it takes a whole community to ‘organize’ anything. The friends you bounce your ideas off of the people that throw in for supplies, who coordinate their various crews to show up, everyone who spreads the word and shows up. That one person can take credit for the actions of so many people is both arrogant and an active hindrance to building a sense of collective power.

DON’T WAIT FOR SOMEONE ELSE TO FIGHT FOR YOUR LIBERATION

THE SECRET IS TO BEGIN