The wind is blowing… Let’s sabotage the machinery of deportation

Migrants’ detention centres and immigration policies are being frequently debated in this period, especially through a rhetoric based on sensationalism: the picture of innocent and well integrated families, who work in this country and whose children go to school here, is being continuously presented, and it is also being said that to lock them up in detention centres is ignominy. This rhetoric is being used in order to provoke the citizens’ indignation, to shout against racism pretending to be resisters, to launch useless calls for the reform of the management of the deportation machinery, for the improvement of prison conditions and to distinguish the ‘good’ illegal migrants from the ‘bad’ ones.

Let’s say it bluntly: we don’t want to add our tears to this bunch of cry-babies, we are not struggling against the machinery of deportation because of empathy and even less because of piety or to make it more human. We are struggling to destroy it. Similarly, we don’t take it as our point that the people locked up in these centres are victims to be relieved, or that we should help them integrate (or reintegrate) in this society, which we want to completely disintegrate.

It’s been a long time since unionists, humanitarians and reformists have shown their role in the co-management of exploitation, control and imprisonment: of dominion, in other words.

Illegal immigrants, like all the other exploited, have never needed supporters or brave protectors in order to rebel. Many have never waited for the go-ahead of any militant or politician. An outstanding example of this, among many other examples of individual and collective acts, from the simplest ones to the most spectacular ones, is the arson of the biggest prison for illegal immigrants in Europe: the CIE of Vincennes, which was set on fire in June 2008.

A migrants’ detention centre is just one of the cogs of the machinery of deportation, which in turn is just one of the cogs of this world made of barbed wire and dominion. As a matter of fact, it is not a concept to be discussed behind the cosy desks of some university. The machinery of deportation is embodied in a series of concrete responsibilities: humanitarian associations such as CIMADE, France Terre d’Asile, Order of Malta, Forum Réfugiés and the Red Cross, which are involved in the management of detention centres and waiting zones [in harbours, airports and border zones, where the ‘suspects’ are subjected to control, TN] and which receive financial help by the State; RATP, Air France, Carlson Wagon-lit, Royal Air Maroc and SNCF: all of them are involved in deportations and some add their controls to those of the cops; the Accor group, which helps the State with some places of imprisonment in their hotels; the institutions that organize raids and traps, such as Pôle Emploi [a sort of job centre, TN], Sécu [health system, TN]…; the companies that organize logistics inside the prison, such as Sodexo, Avenance, GDF-SUEZ, Veolia, Eurest…; construction companies such as Bouygues, Vinci, Eiffage; the bloodsuckers of job agencies such as Ranstad, Adecco, Manpower; the unions that negotiate the terms of deportation along with the State, such as CGT, CFDT, SUD, UNSA, FO, and all political parties that do their electoral business by exploiting the question of immigration…

All these are collaborators without which the State, its cops, judges and guards wouldn’t be able to manage the machinery of deportation. The reasons for these assholes to be collaborators have nothing to do with racism because money has no colour, and it is because of financial profits going straight to their pockets that they give all their help to this shit system.

To highlight the direct responsibilities of these collaborators does not mean to reduce them to the mere question of deportation and borders.

We find all these vultures in the daily management of exploitation, imprisonment, dominion; for we are all cannon fodder for borders, jailers, bosses, humanitarians, no matter whether or not we have documents.

They have names and addresses: each of us can spit some of their responsibilities back at them in the ways we think are more appropriate.

In this social war without truce it is always time to express our hatred without concessions, to attack without mediations everything that makes us slaves. 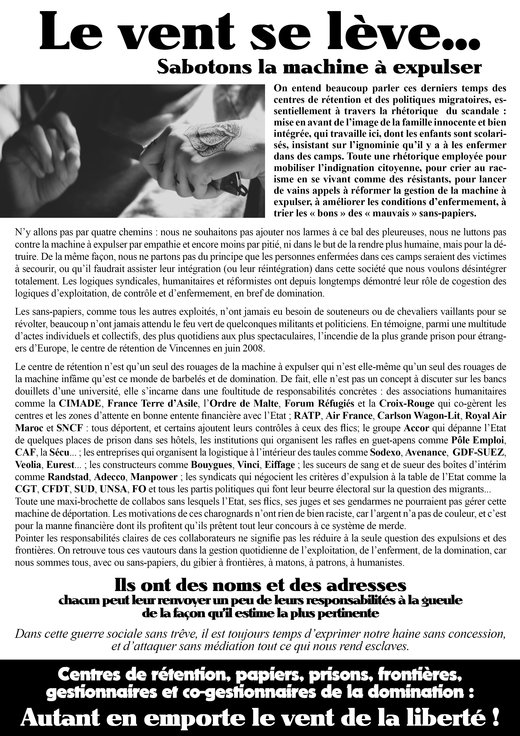