Disorientation: The Task Ahead of Us

Disorientation: The Task Ahead of Us

Welcome to Pitt! From the prison of high school, it looked cool and inviting, full of new freedoms and the chance to learn something real for the first time. But soon enough, you’ll watch the excitement fade. The task of orientation is to clue you in on what’s ahead, to provide a glimpse into the new social terrain.

Pitt is the rich suburban kid’s first real glimpse of something resembling diversity. Pitt is the working class kid’s first five-figure loan. Pitt is Chancellor Gallagher, decked out in the best suits money can buy, threading his way through the lines of underpaid janitors, cooks and security guards rallying outside his office for a better contract and a living wage. Pitt is a private police force harassing people of color on Forbes, or taking pictures of student protestors to build files on troublemakers. Pitt is breaking your roommate’s friend’s brand-name bong underneath the Schenley Bridge. Pitt is the ongoing gentrification of North Oakland and outright colonization of South Oakland.

Aging high school rebels now rail lines of crushed-up Adderall in library bathrooms. Teenaged football stars now stagger from the frat party to the Econ recitation. Entire semesters spent studying the latest scientific forecasts of the coming century’s mass extinctions, ocean acidification and sea level rise of five to fifteen feet are consumed with the same glazed eyes found scattered across a college algebra seminar. Lectures on the tipping points recently crossed, on the massive population displacements and inevitable global destabilization, elicit raised eyebrows but nothing more. After all, tomorrow is Thirsty Thursday and my geology lab was due yesterday.

As the illusion of social peace crumbles with this year’s uprisings in Ferguson, Baltimore, Seattle and the Bay Area, Pitt invites you to spend your free time drinking in sweaty basements, to join the iPhone Generation and the growing army of debt-ridden interns. After all, you are some of the smartest people they could find and you’re needed on the team – the Clinton team, the Trump team, the IBM team – pick it, there’s a slot for you somewhere.

All this and more is yours for just four easy payments of $28,000! Welcome to Pitt.

I guess you could say that we – the small group of your new classmates who wrote this nonsense – are a little jaded. Of course it’s not all bad; Pittsburgh is a pretty awesome city. But we can’t help but to feel there is something missing from Pitt’s campus culture. It is an absence that speaks to those vague, fleeting thoughts so many students drag from the classroom to the library. Sure, it’s easy to drown out the doubts leftover from those first college applications with weekend binges and house shows, but perhaps it was the entire high school experience that left us suspicious to begin with. There is a rational angst that we struggle to articulate: the absurdity of what we accept as “normal” today.

We browse shopping malls for aesthetics and attitudes, and then fiddle with social media and smartphones until they fit just right. We namedrop brands and artists as if they count as our own expression, and then we scoff at the banality of our parties and scenes as if we play no part in their creation. Our perceptions of both the successful career and our own imaginations have been swept away by notions more lavish and distant than Aldous Huxley could write about. Apathy is hip.

But how can we students even think to blame ourselves? Youth today look toward a future deflated by ecological and economic collapse; a future where opportunity is postponed in light of the immediacy of debt, stagnating wages, and corporate oligarchy. A future where the promise of sustainability is found exclusively on billboards advertising “clean” coal, “green” skyscrapers, or hope, change, and vote; a future where even the most optimistic visions of climate change include mass migrations, displacements, and extinctions.

The point is we do not choose to be apathetic. Rather, apathy has been institutionalized, integrated into the relationships we have with education, work and culture. Education does not cater to our personal needs and desires, but is instead intended to prepare us for participation in the market.

The logic of the market is also now the logic of the classroom. Students are customers, paying for-profit businesses to consume “products” in the form of marketable career paths. After all, you need to go to college to land a good job. Our understanding of what it means to be a student is confined to a sort of profit-driven pragmatism, where the pursuit of knowledge ultimately becomes a race to the ever-shrinking job market.

This race places us in direct competition with other students to determine who will have access to the most resources upon graduating. But so many people are enrolling in school that the job market is oversaturated with college degrees, and by the time some students finally have enough credentials to follow their dreams they’re pushing 30 and working just to pay back loans.

And so we approach education with the same tired indifference we dedicate to the part-time jobs that prevent us from sleeping in on weekends.

The atmosphere inside today’s classroom is disorienting. Feedback comes in the form of customer satisfaction surveys. The curriculum is set before the teacher even meets their students. Discussions of real world events never extend beyond the speculative bubble of academia, where debate is applauded so long as it neglects social immediacy; systemic racism is discussed without reference to the intersection being shut down by protestors right outside the classroom window.

And just what are students here for anyway? You would think the $1.2 trillion in student loans, a figure that inversely correlates with state funding cuts, would at least give college graduates some sort of edge in the race to the job market, but reality is as sobering as the bills. Over 40 million students will be graduating in a worse financial situation than any generation in American history. Nearly the entire prospective labor force is already faced with a lower standard of living than that of their parents.

There’s potential for so much more than this. The curtain is lifting on the same scene at universities all over this country. Whether it’s Berkeley, or Madison, or NYU, students have discovered that the only way to learn anything is to reclaim our passion, and the only way to make life truly exciting is to fight back.

How you fight is entirely up to you. We painted the situation with a broad brush, but students aren’t so monolithic. Our generation is bigger and more diverse than the Baby Boomers, and we all have different interests, needs, desires… maybe you want to throw parties where sexist assholes are kicked out, maybe you want to use your parents’ money to buy weed to share with your classmates who can’t afford it, maybe you want to “redecorate” the walls and alleyways of Oakland, maybe you want to join a student group that vibes with what you feel, maybe you want to kick our asses for writing this bullshit. The point is nothing’s going to change unless you act in your own interests, here and now.

Let’s fuck shit up this year. 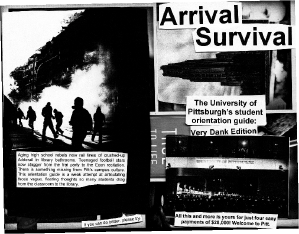