This guide is about one way to run a meeting if you want to make decisions democratically and get things done. The most common problem with democratic meetings is that people talk a lot but don’t arrive at binding decisions. We have found that following the meeting process laid out in this guide helps us to always move towards action while still welcoming the voices of everyone. We find other meeting formats, such as Robert’s Rules of Order, too unwieldy to teach and too easy for power-hungry people to manipulate. Before we begin, we should note a couple of features about our collective that account for why this process works so well for us. First, we have a membership list and only members may vote. Second, in order to become a member, applicants need to agree with a document called our “Points of Unity”, which lays our political and practical principles. We recommend that you ask applicants to skip a meeting so that their candidacy can be discussed. Sometimes we deny people membership if we don’t think they will work well with the rest of the collective. This meeting process may not work for people with widely divergent worldviews. However, if there is general agreement among your group and your members are committed to democracy, our method will probably help you to make decisions and get things done.

There are at least three roles you need to have to make a meeting run smoothly: the facilitator, the note-taker, and other members. The facilitator is the person who controls the flow of the meeting in order to explore issues in a disciplined fashion and bring the group to conclusive decisions. The role of facilitator rotates at each meeting. We recommend that the facilitator be the person who took notes during the previous meeting. We proceed through the list of facilitators alphabetically by first name. The note-taker also rotates. Note-takers should write legibly so that their notes can be read by others.

Additionally, note-takers should be careful about what sorts of things go into the notes: discussions of actions of questionable legality should never be recorded, for example. Finally, other members of the group bring issues to discuss, make proposals, and vote.

We believe being a strong facilitator of democratic meetings makes you an asset to your community. As facilitator, you are temporarily the most powerful person in the room. Strong facilitation leads to excellent meetings. Some people enjoy this power, but others find it uncomfortable. Remember that you are doing a service to the group by being a strong facilitator and that next week someone else will hold that power. Even well-intentioned discussions of important issues can go off track. As the facilitator, it’s your job to draw the line and redirect the conversation. You have the power to interrupt anybody and call any discussion to order – use it.

In general, if the process is going too fast then slow it down, if it’s going too slow then speed it up. When members complain about the speed of the meeting, listen. Encourage people to use hand signals for “me too” (wiggly fingers). If someone is talking too much, say, “I think we need to move this along because we have a big agenda today” (usually true). When people come in late, do not review the early part of the meeting for them – they can look at the notes later. There is no project so valuable that it is incapable of being derailed by lack of discipline in how time is used.

In your attempt to bring the group to decisions you have a few tools in your toolbox. If the group seems generally in favor of an issue but you haven’t heard from everyone, watch for body language that indicates that someone who is silent might not agree. Ask that person their opinion, or risk being surprised by a hard block during voting. If the group seems truly lost on how to approach an issue, you can propose to table it until next meeting so that someone can do more research or seek outside advice. If you have a hunch that everyone agrees but the group seems unsure, consider taking a straw poll – a nonbinding vote on the proposal at hand – in order to figure out who the real dissenters are and then focus on their objections. If the group is generally in agreement except for one or two people, consider directly asking those people to amend the proposal to make it something they would agree to – often it’s an easy fix. Read Come Hell or High Water (2009) by AK Press for an extended discussion of group dynamics that affect group decision-making.

Not every issue can or should be handled during a meeting. For example, if someone is straining the collective process by talking too much, you should approach them outside of the meeting to explain that they need to make more space for others. Legally, open discussion of illegal actions during meetings can form the basis of a conspiracy charge that can be used to target the whole group, including those who chose not to participate in illegal activities. Keep this in mind as you decide what issues to discuss in open meetings. It is the facilitator’s job to guide the discussion appropriately.

If the group is violating its own guidelines, highlight this fact by declaring a point of process. This phrase is a big “yield” sign that communicates that we are at risk of drifting away from the principles of democratic decision-making. For example, if a member is so eager to pass a proposal that they opt to skip the discussion and go straight to a vote, declaring a point of process can remind the group to slow down and have a real discussion. Other violations of process are more subtle, such as pushing the group into certain actions through communications with outside members (e.g. “I know we voted on doing the event on Thursday, but when I talked to the venue they said it had to be Friday, so I signed us up for Friday.”). Activism tends to attract powerful personalities and every now and then one of us tries to push an idea a little too hard. There are infinite ways to violate process, so keep an eye out for new trickery. If you aren’t sure of a procedure, just ask the group.

One of the features of democracy is that your proposal will not always be approved by the group. Just because the group cannot reach consensus on implementing your idea does not mean you shouldn’t do it by yourself. For instance, some protest actions might endanger some members of the group but would be an acceptable risk for others. You can do that stuff – you’re just not doing it on behalf of the group.

As a member of a democratic group, you need to be on the lookout for dynamics that seem to perpetuate the powerlessness of certain people within your group. If particular people consistently break process – say so. If somebody is a chronic interrupter, ask them to raise their hand so that you can recognize them as being on stack. Any group, no matter how intentional in its design, is capable of devolving into old power dynamics that plague most of society. It is an unfortunate possibility that, if you are committed to democracy, your meetings may be the only place that some members feel truly respected. Cherish this hard-won democratic territory – and fight to expand it. 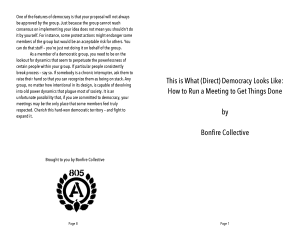