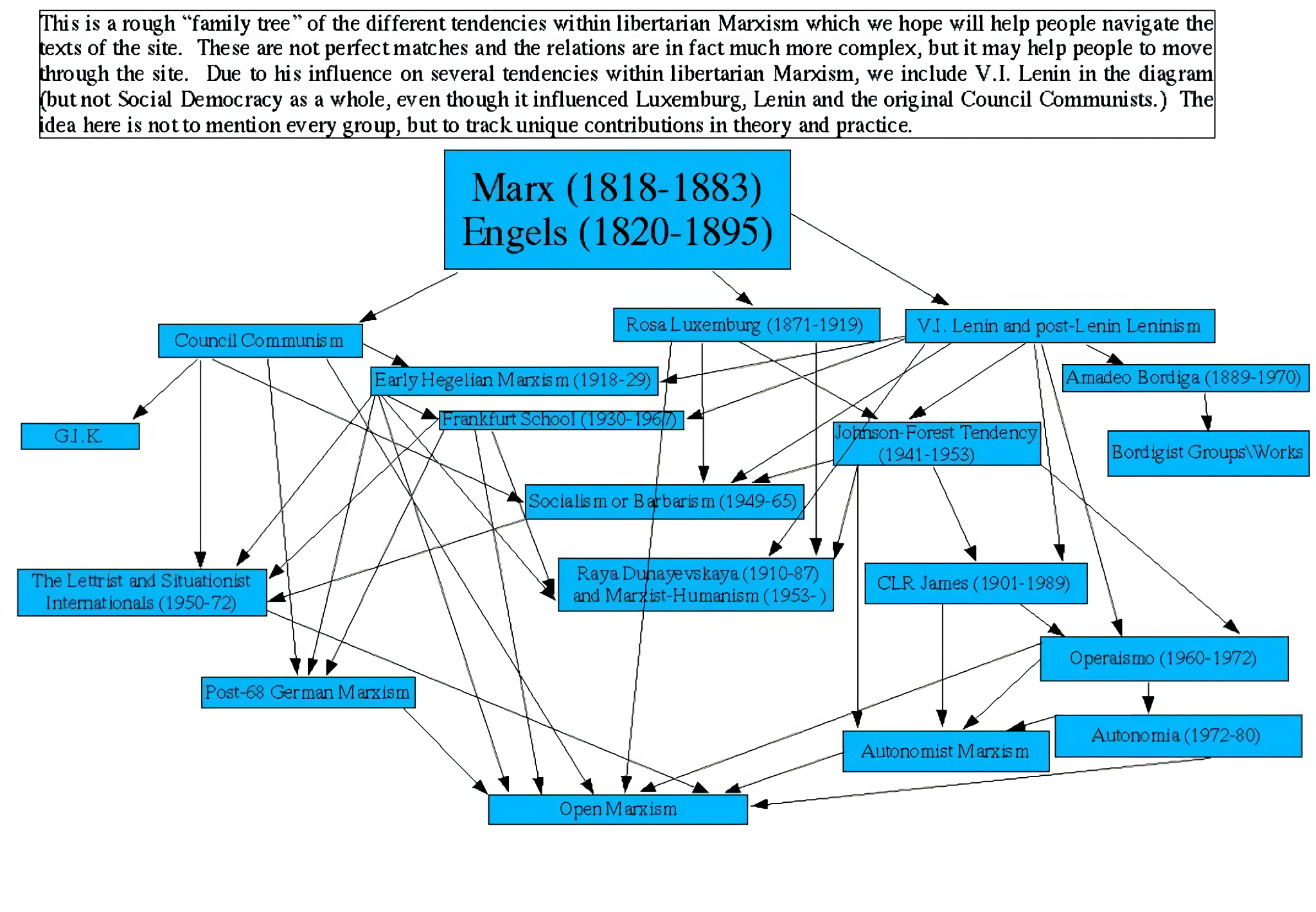 This tendency map was produced by Chris Wright for endpage.com, now part of the libcom.org library — it is designed to trace some of the important tendencies in libertarian Marxism. Contains a brief written history with links to key individuals, groups and publications, and a graphic map.

To help navigate the site, this is a rough, textual “family tree” of libertarian Marxism. Please refer to the Companion Map for a graphical guide to these currents

Karl Marx and Frederick Engels, especially Marx’s work. Of interest, though little read, are the minutes from the International Working Men’s Association.

Out of Social Democracy (1880–1918) arise Rosa Luxemburg and the Council Communists, especially Anton Pannekoek, Otto Ruhle, Herman Gorter, and Sylvia Pankhurst. There seems to have been little cross fertilisation between Luxemburg and the Councilists and Luxemburg’s ideas are only really picked up and built upon thirty years after her death in 1919. The early councilists are followed later by the G.I.K. (trans: Group of Internationalist Communists), Henk Canne Meijer, Cajo Brendel and Paul Mattick, Sr. Council Communism formed a distinct tendency beginning in WWI and continuing through the current period, though the original councilists had no significant organisational presence after the dissolution of the KAPD (German Communist Workers’ Party). There would be a resurgence of councilist groups and ideas in the 1960’s, however, through the Situationist International, Root and Branch in the United States and the ICL/ICO split from Socialisme ou Barbarie and their various offshoots.

Alongside and sometimes connected to the councilists were the early Hegelian Marxists, Gyorgy Lukacs (a council communist himself from 1918–21 or 22), Karl Korsch (who turned to council communism in the ’30’s), Evgeny Pashukanis and I.I. Rubin, whose most important work happened largely from 1918–1928. They were not, however, the first Marxists to return to a serious study of Hegel, as Lenin had begun that process in 1914, but his notebooks were unknown to all but him and had little impact on Bolshevism’s practice or certain, critical aspects of Lenin’s own theoretical work. Some current Hegelian Marxists of note include Christopher J. Arthur, Cyril Smith and Paresh Chattopadhyay, the latter two also influenced by Raya Dunayevskaya and Marxist-Humanism (see below.)

During the 1920’s, the next major development came from the critique of Leninism and Stalinism by Amadeo Bordiga, who wrote the most cogent analysis of Russia as a capitalist society (until the 1940’s) in 1926. Bordiga remained theoretically active, more or less, until his death and his works gave rise to a handful of groups in France and Italy. The most well known of Bordiga-influenced theorists include Jacques Camatte and Jean Barrot (Gilles Dauve).

A major change took place in the 1940’s, with the development of the Johnson-Forest Tendency within U.S. Trotskyism. Though within Trotskyism until 1950, the JFT, led by CLR James (Johnson), Raya Dunayevskaya (Forest) and Grace Lee. They laid out the most significant critique of the Soviet Union as a capitalist society since Bordiga, though unlike Bordiga they referred to it as state-capitalist. Initially influenced mostly by Hegel, Marx and Lenin (having mostly broken with Trotskyism by 1948), they conducted ground-breaking work in reviving Marx’s ideas and grappling concretely with the post-WWII world, and opening up a new practice for revolutionaries. The 1956 preface to their 1950 text State Capitalism and World Revolution was signed by Cornelius Castoriadas and Cajo Brendel, indicating some links with both the new ideas abroad and the older Council Communist tradition, though no direct influence of Council Communism ever seemed apparent in the offshoots of the JFT, maybe due to their critical espousal of Lenin as one of the greatest revolutionary theorists.

In 1953, Dunayevskaya split with Lee and James, leading to the formation of Marxist-Humanism by Dunayevskaya (later solidified into the group News and Letters), while James and Lee would go on to form a new group, Facing Reality, which would eventually see the split between James and now Grace Lee-Boggs. James’ work would continue to influence other people through the journal started by longtime co-revolutionary Martin Glaberman called “Radical America” , whose writers are a virtual “Who’s Who” of the Marxist critique of racism and white supremacy, including George Rawick and David Roediger. The group Sojourner Truth was influenced by James’ work and took up the name of autonomist Marxism, but independent of James’ practical organisational efforts. The work of Noel Ignatiev and Race Traitor would form the other well known tendency within the Marxist critique of white supremacy through the theory of ‘white skin privilege.’

Dunayevskaya and News and Letters have been influenced by the early Hegelians and the Frankfurt School and themselves represent one of the more vocal defenders of a Hegelian Marxism which they refer to as Marxist-Humanism, having made theoretical contributions to the study of Marx and Hegel and the post-Marx Marxist world, as well as innovative readings of Lenin and issues of race, gender and sexuality. The group is also influenced by Rosa Luxemburg and did much to resurrect her in the English-speaking world as a major theorist.

At around the same time as the JFT split from Trotskyism, a group of French Trotskyists around Claude LeFort and Cornelius Castoriadas broke with Trotskyism and came to similar conclusions as the JFT. They formed Socialism or Barbarism, and were influenced by the JFT’s work on the miners’ strikes in the U.S. and by the pamphlet “The American Worker” written by Paul Romano and Grace Lee-Boggs of the JFT. The group had two main tendencies, one more councilist (around LeFort and Henri Simon) and another more Leninist and connected for a while to CLR James (around Castoriadas.) In 1958, LeFort, Simon and their tendency were kicked out, leading to the formation of several different groups, like the ICL, the ICO and Echanges et Mouvement, in which Simon is still active, and which have a heavily councilist orientation.

Socialism or Barbarism also had a large influence on a British group, Solidarity, which would publish a number of good works on the Russian Revolution, the May-June revolt in Paris in 1968 and other materials. Solidarity would also later be influenced by the Situationist International.

The Situationists came out of an art-based group known as the Lettrist International in the late 1950’s, whose most well-known members are Guy Debord and Raoul Vaneigem. The Situationists took up both the Hegelian Marxism of the early Hegelians and the Frankfurt School, the work of Henri Lefebvre, with whom they had briefly good relations (something which is par for the course for the Situationist International internally and externally), councilist ideas and were influenced by Socialism or Barbarism. Debord and Vaneigem wrote some of the most important and unique Marxist works of the second half of the 20th century. Both Solidarity and a group called OJTR (Organisation des Jeunes Travailleurs Revolutionarries), as well as the Open Marxism tendency, were influenced by the SI.

In the 1950’s and 1960’s in Italy, a new tendency began to develop, eventually known as Operaismo or Workerism, which launched a trenchant critique of technological determinist readings of Marx’s work, especially in the work of Raniero Panzieri, Mario Tronti, Antonio Negri, Sergio Bologna and Romano Alquati. Their work was influenced as well by the JFT, especially “The American Worker” . Over the course of many struggles, operaismo, through Negri and Bologna and new thinkers like Mariarosa dalla Costa (who worked with Selma James, CLR James’ partner), would become, in the mid-1970’s, transformed into Autonomia. Operaismo and autonomia not only critiqued technicist readings of Marx, but also notions of periodisation and the relation of labour to capital, seeing in labour’s resistance the fundamental dynamic of capitalist society (hence the new periodisations of professional worker, mass worker, and social worker.)

Operaismo and Autonomia influenced many different tendencies since and has given rise to a new body of work sometimes referred to as ‘autonomist Marxism’, including the work of Negri, Bologna, Dalla Costa, Sylvia Federici, Harry Cleaver, Christian Marrazzi, Massimo de Angelis, Nick Dyer-Witheford, Steve Wright, the ZeroWork journal and the Midnight Notes Collective, among others.

Autonomist Marxism has been particularly influenced of late by Deleuze and Guattari, French anarcho-communist philosophers who produced works between the early 1960’s and the 1990’s. This has helped give Autonomist Marxism a decidedly anti-Hegelian cast, looking rather towards a Nietzschean/Spinozist Marxism also influenced by Foucault. This is the first seriously non/anti-Hegelian tendency in libertarian Marxism since the 1920’s.

Also formed in the late 1960’s were groups of German Marxists, sometimes referred to as the “post-‘68ers” , around people like Helmut Reichelt, Hans Jurgen Krahl, Johannes Agnoli, and others. Their influences include Council Communism, the early Hegelians, and the Frankfurt School.

Almost all of these tendencies have influenced the recent theoretical work of a network of theorists originally grouped around the now-defunct journal Common Sense and three volumes titled “Open Marxism” , among other works. The main proponents of this tendency include or have included Werner Bonefeld, John Holloway, Simon Clarke, Richard Gunn, Kosmas Psychopedis, Adrian Wilding, Peter Burnham, Mike Rooke and Johannes Agnoli. The close affinity of autonomists and the Open Marxism folks has helped to give rise to the journal The Commoner and much cross-fertilisation in publications and discussions. Depending on who one talks to, Open Marxism includes autonomist Marxism or autonomist Marxism includes Open Marxism, though the separation over the importance of Hegel and the question of dialectic seems to provide a basic grounds for differentiating the two tendencies.

In the 1980’s and 90’s, a series of other groups developed, influenced also by much of the above work. The most notable are Kolinko, Kurasje and Wildcat in Germany, Aufheben in England, Theorie Communiste in France, TPTG in Greece and Kamunist Kranti in India. They are also connected to other groups in other countries, merging autonomia, operaismo, Hegelian Marxism, the work of the JFT, Open Marxism, the ICO, the Situationist International, anarchism and post-68 German Marxism.

Obviously other libertarian Marxist persons and groups exist and existed, some of whose work is brought together in the Libertarian Communist Library* as well. This includes Collective Action Notes, Loren Goldner, and Antagonism Press, among others (such as the aborted journal Autonomy in the U.S.)