Title: Britain is heading for another 2008 crash: here’s why
Author: David Graeber
Topics: financial crisis, United Kingdom
Date: 28 October 2015
Source: Retrieved on 28th November 2021 from www.theguardian.com
Notes: The government wants us to believe our economic growth is sustainable, and that budgetary surplus will fix all our problems. But these are dangerous myths
plain PDF A4 imposed PDF Letter imposed PDF EPUB (for mobile devices) Standalone HTML (printer-friendly) XeLaTeX source plain text source Source files with attachments View history Edit this text Add this text to the bookbuilder Select individual parts for the bookbuilder

Britain is heading for another 2008 crash: here’s why

British public life has always been riddled with taboos, and nowhere is this more true than in the realm of economics. You can say anything you like about sex nowadays, but the moment the topic turns to fiscal policy, there are endless things that everyone knows, that are even written up in textbooks and scholarly articles, but no one is supposed to talk about in public. It’s a real problem. Because of these taboos, it’s impossible to talk about the real reasons for the 2008 crash, and this makes it almost certain something like it will happen again.

I’d like to talk today about the greatest taboo of all. Let’s call it the Peter-Paul principle: the less the government is in debt, the more everybody else is. I call it this because it’s based on very simple mathematics. Say there are 40 poker chips. Peter holds half, Paul the other. Obviously if Peter gets 10 more, Paul has 10 less. Now look at this: it’s a diagram of the balance between the public and private sectors in our economy: 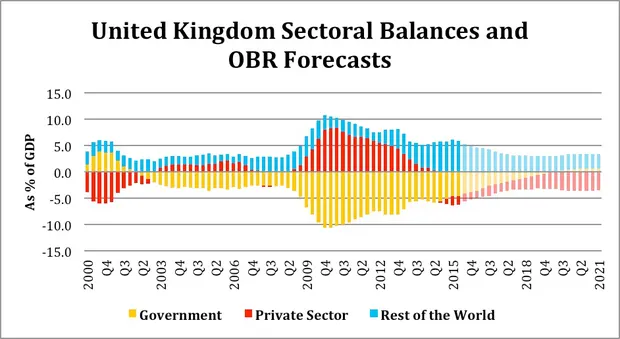 Notice how the pattern is symmetrical? The top is an exact mirror of the bottom. This is what’s called an “accounting identity”. One goes up, the other must, necessarily, go down. What this means is that if the government declares “we must act responsibly and pay back the national debt” and runs a budget surplus, then it (the public sector) is taking more money in taxes out of the private sector than it’s paying back in. That money has to come from somewhere. So if the government runs a surplus, the private sector goes into deficit. If the government reduces its debt, everyone else has to go into debt in exactly that proportion in order to balance their own budgets.

The chips are redistributed. This is not a theory. Just simple maths.

Now, obviously, the “private sector” includes everything from households and corner shops to giant corporations. If overall private debt goes up, that doesn’t hit everyone equally. But who gets hit has very little to do with fiscal responsibility. It’s mostly about power. The wealthy have a million ways to wriggle out of their debts, and as a result, when government debt is transferred to the private sector, that debt always gets passed down on to those least able to pay it: into middle-class mortgages, payday loans, and so on.

The people running the government know this. But they’ve learned if you just keep repeating, “We’re just trying to behave responsibly! Families have to balance their books. Well, so do we,” people will just assume that the government running a surplus will somehow make it easier for all of us to do so too. But in fact the reality is precisely the opposite: if the government manages to balance its books, that means you can’t balance yours.

You may be objecting at this point: but why does anybody have to be in debt? Why can’t everybody just balance their budgets? Governments, households, corporations … Everyone lives within their means and nobody ends up owing anything. Why can’t we just do that?

Well there’s an answer to that too: then there wouldn’t be any money. This is another thing everybody knows but no one really wants to talk about. Money is debt. Banknotes are just so many circulating IOUs. (If you don’t believe me, look at any banknote in your pocket. It says: “I promise to pay the bearer on demand the sum of five pounds.” See? It’s an IOU.) Pounds are either circulating government debt, or they’re created by banks by making loans. That’s where money comes from. Obviously if nobody took out any loans at all, there wouldn’t be any money. The economy would collapse.

But if you push all the debt on to those least able to pay, something does eventually have to give. There were three times in recent decades when the government ran a surplus: 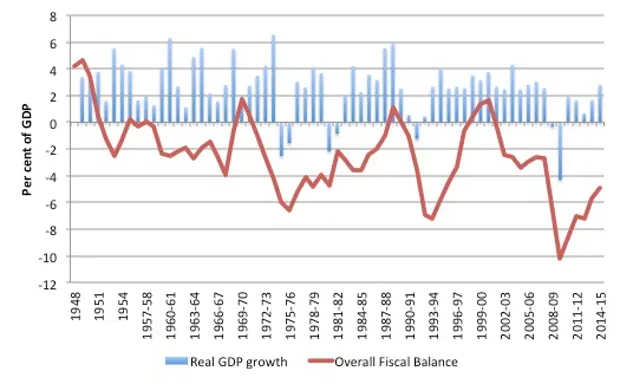 Note how each surplus is followed, within a certain number of years, by an equal and opposite recession.

There’s every reason to believe that’s exactly what’s about to happen now. At the moment, Conservative policy is to create a housing bubble. Inflated housing prices create a boom in construction and that makes it look as if the economy is growing. But it can only be paid for by saddling homeowners with more and more mortgage debt. Here’s the Office for Budget Responsibility’s own figures on what’s going to happen to the cost of housing in the next few years: 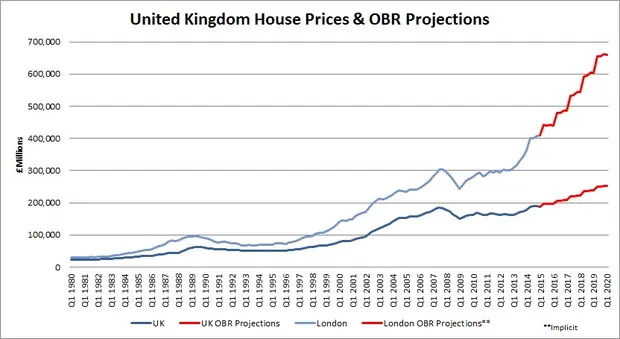 The expression “takes off like a rocket ship” comes most immediately to mind. And here’s what it says will happen to household debt as a result: 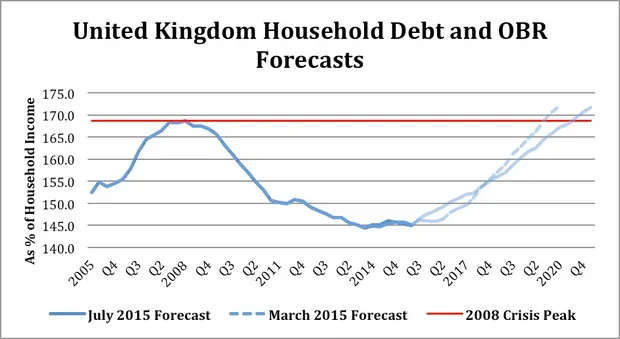 This takes us right back to exactly where we were right before the 2008 mortgage crisis. Do you really think the results will be any different?

But something along these lines has to happen when the government runs a surplus. Everyone will just keep pushing the debt on to those least able to pay it, until the whole thing collapses like a house of cards: just like it did in 2008.