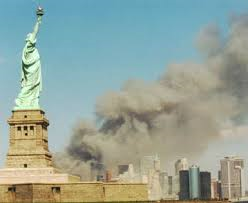 From Somewhere in the United States of America, September, 2001[1] –One the morning of September 11th 2001, four commercial airliners were hijacked and used to destroy popularly perceived centers of U.S. military and economic power. The outcome of these attacks were, in part, the partial destruction of the Pentagon, the complete eradication of the World Trade Center, the death of all persons onboard the four planes, the death of an untold number of workers from within the fallen buildings, and an the death of an unconfirmed number of NYC firefighters and ambulance personnel. At this point reports have been circulated that those operatives responsible for the attacks held an extreme Muslim Fundamentalist ideology.

I, as an anti-imperialist revolutionary of a poor and working class perspective, mourn the loss of those thousands of working class people who were specifically aboard the aircrafts, as well as those custodians, secretaries, maintenance personnel, bike couriers, firefighters, etc., who perished with the collapse of the Twin Towers. These are losses whose true magnitude can only be fathomed by those friends and loved ones who knew them personally. To them I extend my sincere condolences.

Of course the great number of us in this country did not know any of those lost. Even so, this tragedy has taken its psychological toll on most of us. I recognize the fact that many working class persons throughout the United States are now experiencing deep emotions of anger and fear. However, we must understand that these are emotions that much of the “third world” have been feeling for generations. Or more immediately, since the western capitalist world has targeted foreign people and lands for exploitation. These emotions here alluded to are just now striking the consciousness of the people within the United States as the horrors of blood and bombs are returning home to the very doorstep of imperialism. And here the emotions seem intense and clear inasmuch as a “first” for everything always bears an intensity not yet dulled by a dark regularity.

In a word, the intensity of this anger and fear is a symptom of our common isolation as Americans; isolation from the daily horrors experienced by the great multitude of laboring and unemployed persons in the Middle East, or otherwise, who’s daily pallet of existence includes a continuing image of the blood and rubbish we see spread across the streets of New York City today. We, the working class and poor of the U.S. may suffer the humiliation of a daily life of bosses, pay-cuts, bills and any number of other slights, but one thing our generation has thus far been removed from has been the deadly attacks of “suicide bombers”, the leveling of cities, and the mass starvation of our children.

Here we must understand that while the while the acute motivations of those responsible for these attacks may or may not stem from Islamic dogma, the broader motivations clearly can be traced to the federal government’s continuing campaigns of global imperialism. The guns that kill Palestinian children are produced in American factories. The bombs which kill Iraqi civilians are dropped from American planes. The massive poverty within the poor and working class communities in the Middle East and the World over stem directly from the capitalist policies of the North American ruling class and their allies as facilitated by the World Trade Organization, International Monetary Fund, World Bank, and Group of Eight.

As this document is being written, the corporate media is repeatedly portraying the above mentioned anti-democratic, fascist organizations as defenders of “democracy.” The neo-capitalist powers that be are no more the defenders of democracy than Islamic Fundamentalism is the defender of personal freedom. In reality these two ideologies, capitalism and religious fundamentalism of any stripe, represent different sides of the same coin; God and State. Both necessitate the dichotomy of ruled and rulers; rich and poor; master and slave. They both force organic reality to be experienced through the perceptual grid of hierarchical abstractions.

The way to prevent such future horrific attacks is not through arbitrary bombings of other countries or the assignation of individuals who may or may not have been involved. Such actions will only guarantee an escalation of carnage through retaliation and counter-retaliation. Nor will the expansion of the domestic police state prove effective in providing individual security. Israel, for example, is the personification of a quasi-western police state –yet is bombed more frequently than nearly any [other industrialized] nation on Earth. Rather, the way to avoid such future attacks is to eliminate the role of the U.S. and its allies as economic and military imperialists. It is the western nations which consume the vast majority of the World’s resources. It is the capitalist ruling class who reap the great wealth of the Earth through the exploitation of all poor and working people. It is these contradictions, in conjunction with the daily poverty and military oppression of the Middle Eastern people which creates the fertile fields in which these acts of terror are rooted.

Therefore, North American working class revolutionaries like myself must and will continue to struggle for a materially equitable society based on direct participatory democracy; a society which does not seek the homogenization of the World through imperialism, but rather the blooming of creativity, plenty and liberation through international cooperation and autonomy. It is only through the emergence of such a truly free society that the proliferation of anti-social violence (be it U.S. bombs or religious terror) can be expected to subside.

Here I expect the struggle to become more difficult as the police, military, and intelligence agencies are given the green light by the government to begin operating at unprecedented levels of authority. Already Congress has agreed to provide these “security” agencies an additional 20 billion dollars to carry out undefined actions. Already right-wing Republicans and liberal Democrats are calling on working people to passively give up their nominal freedoms so that the state can more easily manage those who would and do dissent. The illusion of national security is gained at the expense of the illusion of our civil liberties. What lies ahead is the police state of random checkpoints, wiretaps, surveillance, political arrests, raids, assassinations, etc.. Of course this already happens, and always has (where one finds a state on finds abuse). Only here it will emerge as a daily reality common enough not to be mistaken as an anomaly. There is also talk of detaining mass amounts of U.S. citizens of Middle Eastern origin and/or requiring them to retain special identity cards. Fascism –no more no less.

We all must be very clear about the fact that the degrading effects which the rise of the fascist state will necessitate will not be limited to any one isolated group. Nor will it pertain exclusively to any one ethnic minority. It will directly affect us all. The strengthening of the police state will not occur without the open attack of the state against those who would oppose it. It is no mistake that with the U.S. entrance into World War I the government rounded up and arrested thousands of working class community and labor union organizers who correctly understood that it would be the working class who would die for the benefit of the rich –and who therefore opposed the war. And as history tends to tragically repeat itself, I fully expect that it will be us who resist the rich man’s paradigm of “democratic” exploitation that they will come for again. I accept this challenge as inevitable, but still I will not fight in their proposed war, and I will not tolerate the rise of fascism in the land that I live. I will continue to organize and I will resist. As to the exact form that my resistance will take –well every moment demands its own events which in turn imply a relevant response. I will do what I have to, and I hope you do the same.

[1] This article was first published anonymously in Barricada magazine, 2001.