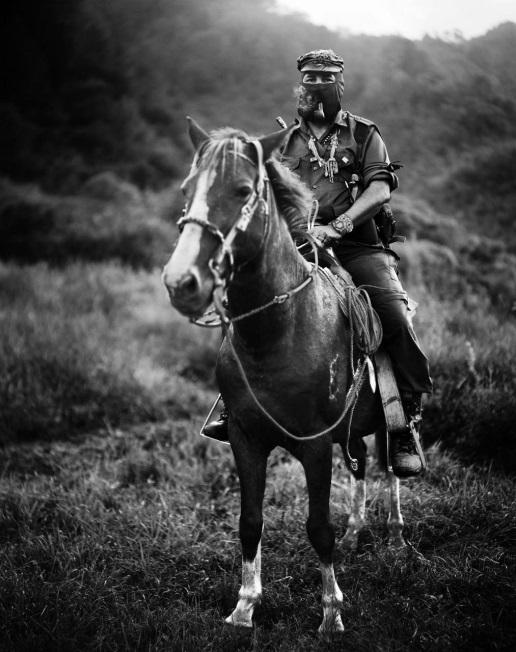 San Cristobal, Mexico, January 1st 2006 -Deep in the Mountains and jungles of Chiapas, populated primarily with indigenous peasants, stirs a force which is seeking to upstage the high financed drama of the 2006 Mexican presidential election. The force grows out of rebel occupied territory held by the EZLN, commonly known as the Zapatistas. The Zapatistas control five regions in Chiapas. Each of these regions includes many small villages, containing a total population in the tens of thousands. Since an armed uprising launched on January 1st, 1994 (the day NAFTA went into effect) these communities have been administered autonomously, guided by humanitarian principles, and utilizing directly democratic decision-making structures at a local level. Their autonomy stems from a shaky cease fire agreement with the Mexican government which has more or less been in effect since the mid-nineties, and is guarded by a standing rebel army estimated to be in the thousands. However, over the course of the last five years the EZLN, who have political aspirations far beyond Chiapas, has found itself more and more isolated from the larger, but fragmented, Mexican left. This isolation has greatly hampered Zapatista attempts to expand their practical influence beyond their few rural strongholds.

In a bold attempt to break free of their current limitations, the General Command of the EZLN issued in June a communiqué known as the Sixth Declaration From The Laconda Jungle announcing a national initiative aimed at uniting the entirety of the non-electoral Mexican left. The initiative, which will consist of Subcommandante Marcos (the most prominent EZLN figure) and other Zapatista leaders traveling throughout the nation in order to speak with and listen to hundreds of grassroots organizations and thousands of working people, is being called the Other Campaign. According to EZLN spokespeople, the basic goal of the campaign is to begin to foment a united left platform, strategy, and bottom up organization based on the opinions, experiences, and needs of the majority of the Mexican people. For the EZLN such an effort is necessary if the needs of the estimated 80% of Mexicans who are currently living in poverty are to be fundamentally addressed.

In addition, the declaration entailed a condemnation of the left leaning Revolutionary Democratic Party (PRD), which they equated with the other electoral parties as essentially working against the common interest of the Mexican people. The document, in reference to an indigenous rights law passed in congress which failed to deliver upon negotiated EZLN demands, stated, “The day that the politicians of the PRI, PAN, and PRD approved a law that does not serve, they killed dialogue, and they clearly said that it does not matter what they agree to or sign because they will not keep their word.”

The announcement of the Other Campaign, timed to coincide with the 2006 Mexican presidential race and set to begin with a march and mass rally in San Cristobal on January 1st, has been met with both excitement and trepidation throughout the country. Although the EZLN has stopped short of calling for a boycott of the national elections, many liberals fear that their condemnation of the PRD will tip the polls in favor of the center-right National Action Party (PAN), or the Institutional Revolutionary Party (PRI) –which is also on the right. At present, Andres Manuel Lopez, former Mayor of Mexico City, of the PRD, maintains an eleven-point lead in the polls over his closest rival, Roberto Madrazo of the PRI.

In addition to the debate about the EZLN’s potential effects on the presidential race, speculation has surfaced that Subcommandante Marcos and the EZLN are trying to transition away from their role as armed revolutionaries, and are setting themselves up for an electoral campaign of their own in 2012. These are charges that the EZLN deny.

On the night of December 31st I made my way, by truck into Zapatista held territory. Seven hours outside of San Cristobal (including two hours on rugged dirt roads) I reached the remote mountain town of La Garrucha. There I sat down with Lieutenant Colonel Moises of the EZLN. Moises reaffirmed that the EZLN, “is not looking for electoral power.”

The Colonel, like other Zapatista leaders, did not call for a nationwide electoral boycott, but did reiterate the EZLN’s lack of faith in the official electoral process. He went on to clarify that “the Zapatistas do not vote [in sanctioned Mexican elections].”

As for the charge that the EZLN is unequivocally turning away from armed struggle, or that they are exerting pressure on other Mexican groups to forego such activities, Moises asserted that the EZLN fully intends on retaining their armed formations even when engaging in nonviolent social organizing beyond Chiapas. He continued saying, “the Zapatistas began with armed struggle. Therefore it is not the Zapatistas’ business to tell anyone else how to struggle.”

Moises concluded the interview by saying, “the small farmers in Mexico have been forgotten and that is a focus of this campaign… This Campaign is part of their struggle.”

The following day, an estimated one thousand masked Zapatistas embarked from La Garrucha to San Cristobal (a city which was briefly held by the EZLN in 1994) where the Other Campaign would be officially launched. Leading the caravan was Subcommandante Marcos, riding a motorcycle. Thousands more Zapatistas made their way from other EZLN communities. Along the route whole indigenous towns, men, woman, and children, turned out along the roads to wave, cheer, and sing songs of support for the Zapatistas and their cause.

The caravans converged on San Cristobal just as night set in. There, over 15,000 Zapatistas marched in four lines through the streets of the city. Chants of “Viva Zapata! Viva La Zapatista! Viva La Revolution! Long Live Zapata, The Struggle Continues!” rang through the cool night air.

The march emptied into the city’s main square. The crowd grew to an estimated 20,000. Taking the stage were a number of Zapatista leaders. One after another called for all of Mexico’s working people and farmers to unite against their common enemies and build a new kind of power outside the confines of traditional politics.

One Zapatista speaker bellowed, “We will reach out to workers in the cities because we [the indigenous farmers] are already organized… The Other Campaign will bring the struggle we deal with in our day-to-day life [across all of Mexico]. The rich cannot continue to put the oppression down onto the small farmers and further down onto the earth, because the earth cannot stand it anymore… The workers and farmers will bring justice, liberation, and freedom to Mexico this year, starting January first, 2006!”

The following speaker, Comandante Keli, asserted, “This struggle is not just for men [but also for women]… We all must work together for all of our freedoms… The new junta [must] encompass everyone, and at its center it [must be] anti-capitalist.”

One demonstrator, Ugel, a student from Mexico City who came to Chiapas to show his support for the EZLN and the Other Campaign told me, “I support the organizing of all the people. [The Other Campaign] is about the people making their own organization so they can decide [things] for themselves instead of one person [the president] deciding for all. I think this movement is going to make a new political structure for the participation of farmers, students, and workers. That is what the political class has not allowed for eighty or ninety years.”

The final speaker to take the stage was Subcommandante Marcos. Addressing the crowd Marcos said, “You are our partners… The left organizations, the anarchists, the groups that are not defined… man or woman… We want you to help us talk with the workers in the city and in the world!”

He continued, “Everyone will have a place in the Other Campaign. Like Zapatistas we will defend our base [areas]… [Yet] we are prepared to talk and listen to that person who is in the back. They are very important… For the first time we finish January First not yelling EZLN, instead we yell that we are partners! Viva! Long live the revolution!”

The crowd roared in applause. For the moment an unmistakable feeling of optimism filled the air of this old Mexican city. However, it will be a long road before the Zapatistas can claim victory over the traditional political forces that are entrenched in Mexican society. That road will take EZLN leaders to all corners of the nation over the course of the coming year. What will come from this campaign is yet to be written.