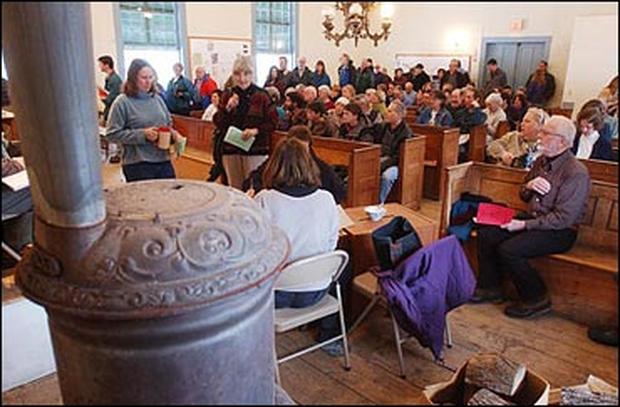 March 5th, 2019, Cabot VT -Today, the first Tuesday of March, is Town Meeting Day in Vermont. While a community may have many Town Meetings during the year, this is the one day when every community has a Town Meeting all at once. And here, all the citizens collectively act as the legislative branch of the local government. One citizen, one vote. Unlike in the rest of the United States, towns in Vermont have the right to conduct all their government business from the floor of the Town Meeting. This means citizens have the ability to openly debate various proposals, budget items, and resolutions. They also have the power to amend such items as they see fit. Traditionally votes are public and when weighing where you stand on an issue, you do so knowing that you will need to make your position known to your neighbors who may or may not agree with you. And while the lion’s share of Town Meeting issues have a clear and direct grounding in more practical local affairs (like should the towns people raise the money to purchase a new snowplow truck, or shall the town build a new fire station, or start a community orchard), there have been important historic moments when Town Meetings have tackled issues well beyond the scope of their more immediate concerns.

In the 1770s Town Meeting became the voice of Vermonters in insurrection who, at the time, were fighting for self-determination through an armed guerrilla struggle against the Royal New York Colony (i.e. Ethan Ellen and the Green Mountain Boys). Later, Town Meeting became a place to organize active support for the American Revolution against the British Empire. More recently, in the 1980s, Town Meeting became a means through which Vermonters registered their voice in opposition to nuclear proliferation. And during the second term of the George W Bush Presidency, the Towns of Brattleboro & Marlboro went so far as to vote to issue arrest warrants for the President and Vice President for treason (warrants which in theory hold sway if Bush or Cheney ever step foot in those towns and if they can be apprehended by the local Constable).

Vermont’s long standing tradition of Town Meeting, this practice in direct democracy, was lost to most of the U.S. during years of counter-revolution immediately following the victory over Brittan in the 1780s. Here, wealthy interests fought to roll back the democratic gains made by regular people during the social upheaval that was the war. Power, was again vested in institutions controlled by the rich and powerful. But Vermont was protected from this regression by remaining an independent republic for fourteen formative years following the Revolution. And our rights and traditions continue to this very day.

We, as Vermonters, should be proud of our remaining vestiges of direct democracy. It was for such democratic principles that citizens of France died on the walls during the Paris Commune of 1871. And it is for similar principles that the people of Rojava (Syria) continue to fight against ISIS and Turkish Aggression. But it is not enough for us to take pride in what we have. For true democracy to not only survive but to flourish, we must also struggle to expand the scope and authority of Town Meeting and to make it even more meaningful in the modern age.

Vermont should therefore take steps to empower Town Meeting whereby the people themselves reclaim the power to pass broad legislation and to impact our larger economic & social conditions through a directly democratic Town Meeting referendum system. We should not have to wait for the Governor and the General Assembly to be pressured into passing the $15 an hour livable wage, paid family medical leave, single payer universal healthcare, and card check Union recognition. Rather Vermont’s constitution can be amended to grant that when and if fifty-percent-plus-one Town Meetings, representing a majority of Vermonters, pass a resolution on a given issue, that resolution shall become law of the land (and not subject to the veto of the Governor or General Assembly). And by pursuing a referendum system which is still linked to a town’s right to conduct such decisions through a participatory floor debate and vote, we would preserve the inter-human connections in a community in such a way that would reaffirm the importance and validity of the individual opinion as it ultimately becomes effected and transformed through a directly democratic and collective process. This is Freedom & Unity.