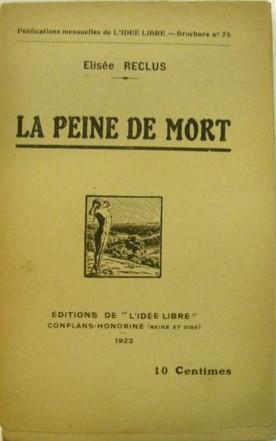 I do not have the honor to be a Swiss citizen and I know only very imperfectly the constitution of which some petitioners ask to suppress an article; but this is a human question agitated in all civilized countries. As a man and an international, I have the right to deal with this question, and unfortunately I also have to deal with it as a Frenchman, because my homeland is still a country of head-cutters, and the guillotine, which was invented there, still works there.

Enemy of the death penalty, I must first try to know its origins. Is it rightly that we make it derive from the right of personal defense? If it were so, it would be difficult to fight it, because each of us certainly has the right to defend ourselves and our loved ones, either against the beast or against the fierce man who attacks us. But is it not obvious that the right of personal defense cannot be delegated, because it ceases immediately when the danger ceases? When we take the lives of our fellow human beings into our own hands, it means that there is no social recourse against them, it means that no one can help us; in the same way when a man places himself apart from the others, above any contract, and makes his power weigh on citizens changed into subjects, the latter have the right to rise up and kill whoever oppresses them. Fortunately, history gives us numerous examples of the claiming of this right.

The origin of the death penalty, as now applied by States, is certainly revenge, revenge without measure, as terrible as hatred may inspire, or revenge regulated by a kind of summary justice, in other words, the penalty of retaliation: “Tooth for tooth, eye for eye, head for head”. As soon as the family was formed, it took the place of the individual to exercise revenge or vendetta. It demands the price of blood: each wound is paid for by another wound, each death by another death, and this is how hatreds and wars drag on. This was the state of a large part of Europe in the Middle Ages, it was in the last century that of Albania, the Caucasus and many other countries.

However, a little order has been introduced into the perpetual wars, thanks to redemption. Individuals or families could usually redeem themselves, and this kind of transaction was fixed by custom. So many oxen, sheep or goats, so many ringing crowns or acres of land were fixed for the redemption of blood. The condemned man could also redeem himself by having himself adopted by another family, sometimes even by that which he had offended; he could also become free by a brilliant action; finally, he could fall too low for anyone to deign to punish him. It was enough for him to hide behind a woman and henceforth he was free, too vile to be killed, but more unhappy than if he had been covered with wounds. He lived, but his life was worse than death.

The law of retaliation from family to family could not obviously be maintained in large centralized states, monarchies, aristocracies or republics. There it is society, represented by its government, king, councils or magistracies, which is responsible for revenge or condemnation [vindicte], as we say in the language of jurisprudence. But history proves to us that by monopolizing the right to punish in the name of all, the State, caste or king, was above all concerned with avenging its particular injuries, and we know with what fury it pursued its enemies and what refinements of cruelty it put into making them suffer. There is no torture that imagination can invent and which has not been thus applied to millions of men: here they were slowly burned, elsewhere they were flayed or successively cut off the limbs, in Nuremberg, they locked up the condemned man in the body of the iron “Virgin”, reddened with fire; in France, they broke his limbs or dragged him on four horses; in the East, they impale the unfortunate ones; in Morocco, they are immured, leaving only the head outside the wall. And why all this revenge? Is it to punish real crimes? No, the hatred of kings and the ruling classes has always turned against men who claimed freedom of thought and action. The death penalty has always been in the service of tyranny. What did Calvin, master of power, do? He had Michael Servetus burned, one of those men of scientific divination like there are barely ten or twelve in the history of all mankind. What did Luther, another founder of religion, do? He excited his friends the lords to run after the peasants: “Kill them all, kill them, hell will take them back sooner.” What did the triumphant Catholic Church do? It organized book burnings. It kindled the stakes, held the noble people of Spain in terror for three centuries. And recently when a free city, guilty of having maintained its autonomy, was reconquered by its oppressors, did we not see them killing by the thousands, men, women, children and using the machine gun to grow bigger quickly the heaps of corpses? And those who took part in the massacre, proud of their work, did they not come cynically to brag about it? We could hear them right here.

(The speaker is alluding to the repression of the Paris Commune.)

But if the State is fierce when it comes to avenging an attack on its power, it brings less passion in the condemnation [vindicte] of private crimes, which little by little made it ashamed to apply the death penalty. Gone are the days when the executioner, dressed in red, showed his person behind the king: he is no longer the second personage of the State, he is no longer the “living miracle” as he was called by Joseph de Maistre; he has become the shame of society and does not even allow himself to be known by his name. Men have been seen blowing off their right hands so as not to be forced to serve as executioners. In many countries where the death penalty still exists, people are beheaded, hanged and garroted only inside prisons. Finally, in several countries, the death penalty has been abolished; for more than a hundred years the blood of the decapitated no longer fouls the soil of Tuscany, and Switzerland is one of the nations which have had the honor of burning the scaffold. And now it would be ashamed to restore it! Switzerland has really little concern for her glory. Before it adopts the restoration of the death penalty, let it at least be proven that the countries where there are fewer crimes are those where the penalty is the most terrible!

However, it is precisely the opposite that happens: because blood calls for blood, it is around the scaffolds and in the prisons that murderers and thieves are formed. Our courts are schools of crime. What more vile beings than all those whom public condemnation uses for repression: informers and jailers, executioners and policemen!

So the death penalty is unnecessary. But is it fair?

No, it’s not fair. When an individual avenges himself in isolation, he can consider his adversary responsible, but society, taken as a whole, must understand the bond of solidarity which binds it to all its members, virtuous or criminal, and recognize that in each crime it also has its share. Did society take care of the criminal’s childhood? Did it give him a complete education? Did it make the paths of life easier for him? Has it always given him good examples? Has it ensured that he has every chance of remaining honest, or of becoming so again after a first fall? And if society has not done so, can the criminal not accuse it of injustice?

The economist Stuart Mill, this honest scholar whom it is good to set as an example to all his colleagues, compares all members of society to runners to whom some Caesar would set the same goal. One of the competitors is young, agile, fresh, another is already old: some are sick, lame, legless. Would it be fair to condemn the latter: some to misery, others to slavery or death, while the former would be crowned victorious? And do we do anything else in society? Some have chances of happiness, education and strength: they are declared virtuous; the others are condemned by the environment to remain wallowing in misery or in vice: is it on them that social condemnation must fall?

But there is yet another cause which forbids bourgeois society from pronouncing the death penalty. It is that she [bourgeois society] herself kills and kills by the millions. If there is a fact proven by the study of hygiene, it is that the average life could be doubled. Misery shortens the life of the poor. One profession kills in the space of a few years, another in a few months. If all had the enjoyments of life, they would live like peers in England, they would grow older than sixty; but practically condemned either to forced labor or―which is worse―to lack of work, they die before their time, and during their short life, disease has tortured them. The calculation is easy to do. It is at least 8 to 10 million men that society exterminates each year, in Europe alone, not by killing them with gunshots, but by forcing them to die by removing their couvert at the banquet of life. Ten years ago, an English worker, Duggan, committed suicide with all his family. An infamous newspaper, always busy extolling the merits of kings and the powerful, had the impudence to congratulate itself on this workman’s suicide. “What a good riddance,” they exclaimed, “workers for whom there is no place, by killing themselves, relieve us of the disagreeable task of killing them with our hands.” This is the cynical confession of what all worshipers of the God Capital think!

What, then, is the remedy for all these mass murders, together with the murders which are committed in isolation? You know in advance what a socialist proposes. It is a complete social change, it is collectivism, the appropriation of land and instruments by all those who work. It is thus that the chasm of hatred can be filled between men, that misery and the pursuit of fortune, that great adviser of crimes, will cease to excite citizens against each other, and that social punishment can finally rest. To the right of force, which prevails in wild nature, it is time to make justice succeed, which is the ideal of any man worthy of the name.

But in the transformed society, there may still be crimes. Physiologically the type of the criminal may present itself again. What will we do then? Will we kill the criminal? Certainly not. The one in whom the crime comes from madness, we will treat him, as we treat the mad or the other sick, by guarding against their violence. As for men who have become criminals through fiery temperament or ardor of blood, it would now be possible to offer them rehabilitation through heroism.

We have seen it a hundred times: galley slaves throw themselves into the flames or into the waters to save the unfortunate and thus feel reborn in the esteem of other men. The convicts whom the commune of Cartagena freed and whom France made slaves again, were sublime in their heroism during their short freedom of a few months. Obey, said Christianity, and the people degraded themselves. Get rich, say the bourgeois to their sons, and they seek to get rich in every way, either by violating the law or, with more skill, by circumventing the law. Become heroes, say the revolutionary socialists, and even brigands will be able to recover through heroism.

(Lecture given at a meeting convened by the “Workers’ Association” of Lausanne.)