The Future of Our Children 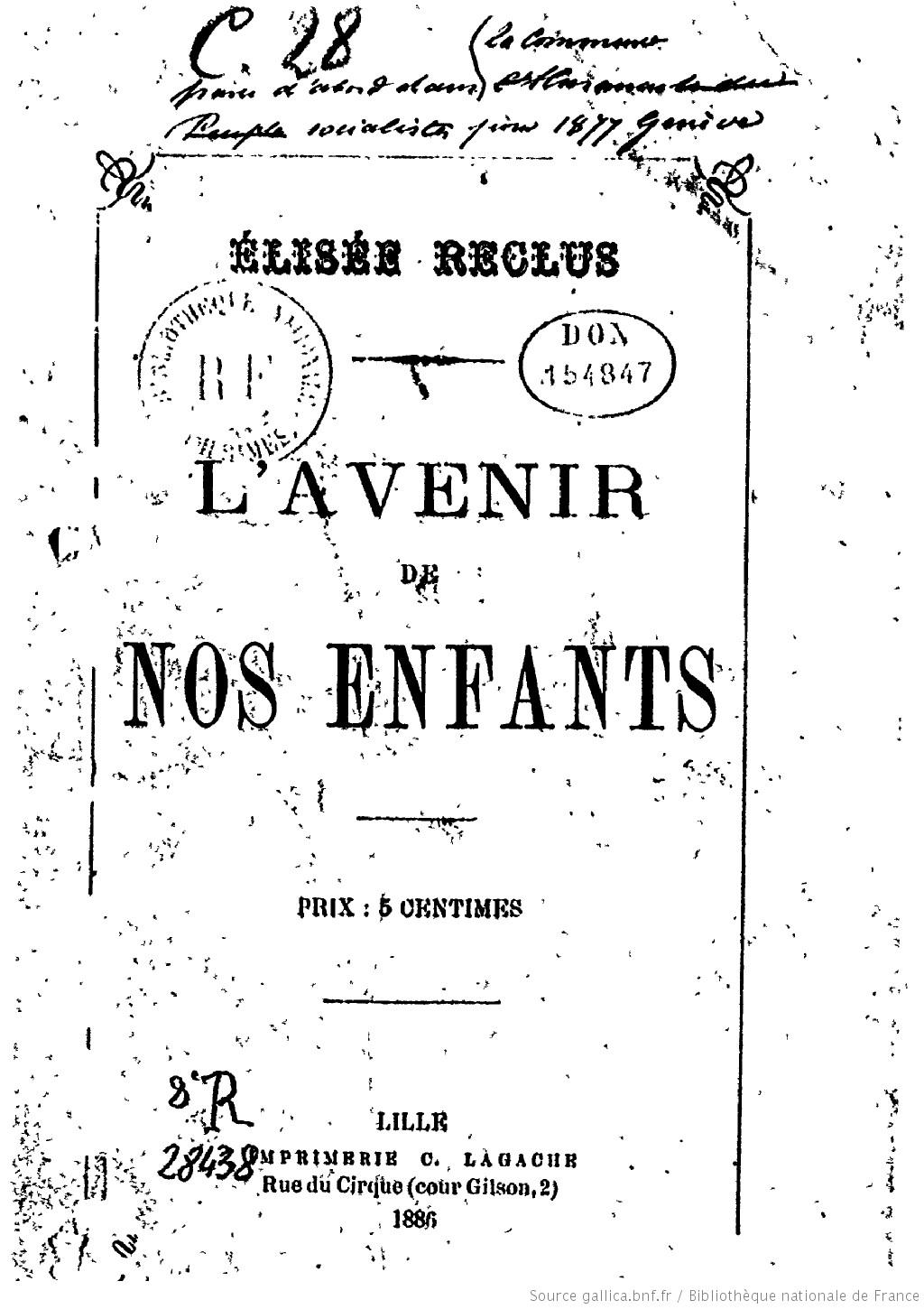 Selfish people that we are! In our wishes for revolution, it is rare that we think of others than ourselves. We expose workers’ grievances, especially those of men, because men are the strongest; we claim for them the right to the instruments of labor and the integral product of their labor; we demand that justice be done. Beginning to know that we are the number and the intelligence, we feel rising within us the will to act and, in the half-consciousness of our strength, we prepare ourselves for the next revolution. If we felt weaker, cowardly as most of us are, we would still be begging for the crumb that falls from the table of the kings.

But below the grown man, however unhappy he may be, there is a still more unhappy being, the child. This weak being has no rights and depends on caprice, whether benevolent or cruel. Nothing protects it against the stupidity, indifference or perversity of those who are its masters. Who, then, will utter the cry of freedom in its favour?

In today’s society, all authority is exercised from master to slave in a logical sequence. God reigns above, enthroned beyond the heavens and delegating his powers on earth to the strongest, priest or king, Hildebrand or Bismarck. Below come satraps of every name, governors and deputy governors, presidents and vice presidents, generals and captains, masters and submasters, all bowing their spine before a superior, all puffing out their breasts in pride before the subjects: on the one hand adoration, on the other contempt, here command, there obedience! Since Jacob we haven’t found anything better: society is nothing but a series of ranks descending from God to the slave and continuing even into hell. Gehenna, the [biblical] abyss of torment, is it not the symbol of what the vanquished and the weak have to suffer?

And among these weak ones, it is the children who are the great scapegoats! I appeal to sincere men who remember their young years. Either they were unhappy on their own, or if they were pampered, if the first struggles of existence were facilitated for them, they saw their little comrades suffer, an irremediable suffering against which any revolt is useless: what could they do against the violence and mockery, the cowardly insults of the grown-ups? Nothing, if not to amass little by little in their hearts a treasure of revenge which, having grown up in their turn, they may spend in molesting other children.

Moreover, however tender the parents may be, however devoted they may be to the happiness of their offspring, they must themselves submit to the conditions imposed on them by the society in which they live and submit their children to them as well. We know how hard these conditions are for the poor. The son of the starving must enter the factory at a very young age, become the servant of the formidable machine that weaves wool or grinds iron. Not only does he have to obey the masters, the foremen, the lesser workers [moindres ouvriers], but he is also enslaved to all the cogs whose movements he must observe in order to regulate his own. He no longer belongs to himself; every gesture becomes for him a simple mechanism, any shadow of thinking is for him only an accompaniment to the work of the monster pushed by the steam.

This is how he rises to the state of man, when fatigue, misery, anemia do not quickly put an end to his wasted life. Puny in body, stupefied in intelligence, without moral ideas, what can he become and what will be his joys? Crude, brutal sensations that awaken him for a moment only to let him fall back, more numb, more unable to escape his slavery. And from time to time, legislators take care to regulate “child labor in factories!” According to these laws, which we have the audacity to extol as marvels of humanity, no boss has the right to make the child work for more than twelve hours and to deprive him of the night’s sleep, “except in exceptional cases,” and the exception, as we know, always becomes the rule. Suffice to say that it is permissible to poison, but only in small doses, to murder, but only with small blows. Here is your compassion, noble legislators!

But let’s assume that now child labor in factories is prohibited, let’s even suppose that the parents receive a state pension, in exchange for the meager salary that the boss would give to the children. Henceforth, the school would be open, and the education would be complete for all, the child of the poor as well as of the rich.

Now that the school is secular, the religious formula has been replaced by a grammar formula, the incomprehensible Latin sentences have given way to French words which are no clearer. Whether the child understands or not, it matters little; he must learn according to a form [formulaire] drawn up in advance. After the absurd alphabet which makes him pronounce the words otherwise than he reads them, and thus accustoms him in advance to all the nonsense which will be taught to him, come the rules of grammar which he recites by heart, then the barbaric nomenclatures which are called geography, then the account of royal crimes which is called history. And how can the very gifted child, in the long run, rid his brain of all these things that have been forced into it, sometimes with the help of a martinet and pensums! Besides, are these schools slavery-free, without hours of detention and without bars on the windows? If we want to raise a free generation, let us first demolish the prisons called colleges and high schools!

Socialists, let us think of the future of our children even more than of the improvement of our situation. We ourselves, let us not forget, belong more to the world of the past than to the future society. By our education, our old ideas, our remnants of prejudices, we are still enemies of our own cause; the mark of the chain can still be seen around our necks. But let us try to save the children from the sad education we ourselves have received; let us learn to raise them in such a way as to develop them in the most perfect physical and moral health; let us know how to make humans of them as we would like to be ourselves.

Let us not forget, the ideal of a society is always realized. The present bourgeois society, represented completely by the State, has done for education precisely what it wanted to do. Now, what does the State do with the children without families in its care? We know it. It collects them in the hospices where, badly nourished, badly looked after, they succumb in great majority; then it takes the rest and raises them to make them child soldiers, prison guards, police bloodhounds. This is the work of the State, and the society represented by it is fully satisfied. As for us, when our turn comes―and it will certainly come―when we can act and realize our will, our great goal will be to spare our children all the miseries that we ourselves have suffered.

Let us have the firm resolution to make free men [and women] of them, we who still have, of freedom, only the vague hope.