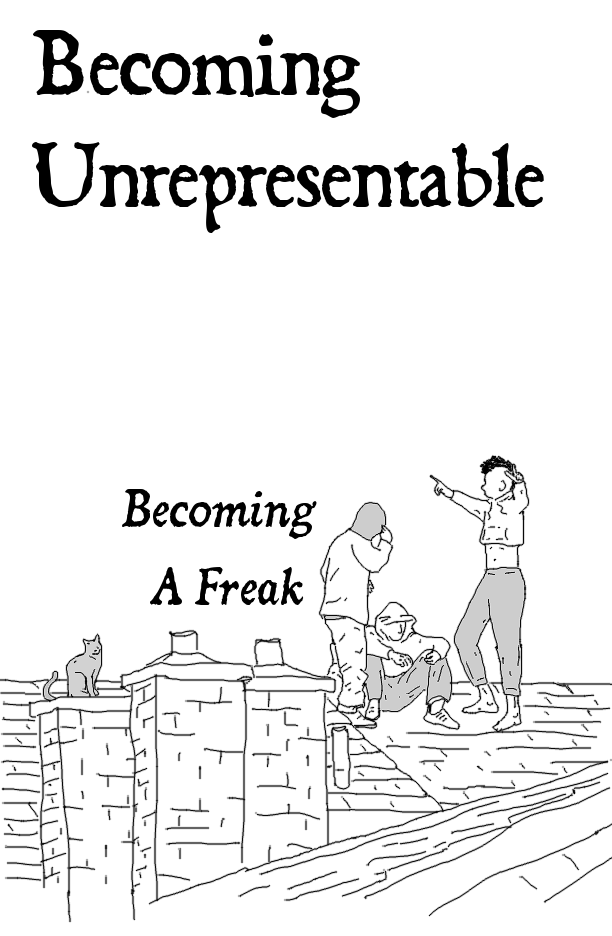 I’m not going to tell you what conclusions to come to regarding identity, outreach, or our relationship to mass media. I don’t think I have that to give you anyway. Plus, I’ve been trying to avoid “you should” lately. I’ve only written here the conclusions I’ve come to for myself and I’m going to try to show you the tools I used to get to them, in the hopes that you might pick up these tools and use them to come to your own conclusions. They will be at least a little different than mine, I’m sure.

It wasn’t until I started making friends with people from a Pre-Occupy Wall Street Era anarchism that I heard certain language used more intentionally than I’m used to hearing in queer or artist circles. The use of the term ‘freak,” as in “I love Jimmy, she’s a total freak,” was used differently. I remember a specific instance where a security guard sized me up and ran me off property before I even got to the front door of a library where I was meeting a friend. “I mean, you look like a freak” was my friend’s explanation and it was, of course, completely true.

I heard the usage too, in the context of putting together weekly dinners and trying to find like-minded people to come to the house and hang out, in phrases like “yeah, we gotta try and meet all the freaks in town.” It was used as a term of endearment, and even something that measures character, exactly because in these circles and in any other circle, it denotes people that aren’t able to do what they’re supposed to do in accordance with cultural law. I guess I’m not afraid of sounding edgy when I say that I think a freak is someone who is punished for operating as a contradiction to the state of things and keeps operating anyway. I look up to freaks because they’re getting by with the methods they chose, not the ones provided. If that’s too edgy to be taken seriously, then you don’t have to take me seriously, but ‘freak’ is what I aspire to.

I think outreach is rad. I mean I’m writing this whole thing, right? But I split hairs between outreach and marketing.

Marketing requires branding. I’m weary of branding for all the obvious reasons. But it’s not even necessarily as simple as feeling like a watering down effect happens when we begin to do marketing, though I think that’s true too. I think the real issue is more fundamental. I have nothing to say that I think is going to be totally relevant to a Mass. I’m not able to believe that people are so simple or that they should strive to be condensed into a universal identity. I don’t accept “Well, everybody wants to be sexy/the boss/famous/etc.” because I think those common desires are artificially planted as entry points into identities and act as more of a threat than an option. “If you don’t want ____ then you are a freak and you will be punished.”

In this way, audiences aren’t really tapped into, but are instead constructed by marketing efforts themselves. I’m not so excited about constructing people. I don’t want to offer my rebellion or dissatisfaction as a rebel identity that you wear like a hat. I don’t want to become a kind of social programmer that designs an ideal militant or outsider who we all now aspire to become. A hero that some might be able to fill out better than others, maybe even allowing those individuals access to levels of escape from responsibility for their actions or any other power that comes from accumulating social capitol and correct identity. A local antifa guy talks about the correct books he’s reading and his correct and sexy street fighting tactics and has been around long enough for the people around him to overlook his assault of a woman here, or the betrayal of a friend there. This, I think is where I like to separate my definition of ‘freak’ from the umbrella of identity, even the identity of a ‘truly free person’ or the identity of a ‘freedom fighter’ as denoted by their choice of flag colors. There is actually no perfect freak or hero freak or any condensed freakhood to aspire to.

The reason I’m uninterested in branding a free identity is because, when you cut past the patriotism and all the other bullshit freedom-branding that’s already going on, and you look at even the most genuine desires for real fulfilment, you might find that there is no one single freedom that everyone wants. To believe that there is, I think is a convenient copout and what you’re really doing is taking advantage of the requirement to have identity, a chore that modern culture tasks us with. You’re selling identity, the identity of a naughty rebel or an enemy of the state, and when you can be identified by a market, by the news, by a police force etc., you can be represented by it. And Jesus Christ, I can’t tell you how badly I wish companies would stop representing me.

When a news anchor goes to an occupation or a riot and puts a mic in a disobedient face and that person actually tries to explain their actions, why is it that by the time the news station has condensed the event into a news story, the interviewed occupier sounds like a complete moron? Is it at all similar to multibillion dollar companies selling not-white, not-men main characters in their multimillion dollar films as characters against rebellion, for justice and legal order, characters who learn to appreciate ‘peace’ and oppose ‘violence’? Who learn to stop biting the hand that feeds or to compromise their dissatisfaction for what is perceived to be more mature or possible, some middle ground between what I want and what’s already allowed? Why is it that when they represent us, we look more manageable on screen than we look when we stand up for ourselves, in the streets of Charlotte, Stonewall, Ferguson, etc.? Who are we being represented for? Are we hoping that our homophobic parents will see us in a hollywood movie or on the news and call us up and say, “We now see that you’re totally harmless and we think we can learn to forgive you for being a freak?”

Or maybe they’re not showing us who we are, but a version of ourselves they might consider not arresting. One that doesn’t act out. Or one that can “just throw a hat on over those dreadlocks and get behind the register” or dress in straight drag to not offend the customers. It’s been said a thousand times, but it’s worth saying again — representation is a trap. I don’t want to be represented. I don’t want to be shown an ideal version of myself. I want to be left to my own devices.

When I come to conclusions like this, I’m faced with the question of survival and sustainability. Or at least my level-headed friends will make me face them:

• Positive representation in media might construct a world where strangers don’t light our community centers on fire or jump us on our way home.

• Yes, positive representation will come with compromises, maybe more compromises than victories, but if the small up-sides to being represented in media are the difference between life and death, maybe we might be willing to live badly if it means getting to live at all.

That’s complicated for me. If I were to force myself to answer the question “but what are you FOR? What do you WANT?” I can confidently say that my answer wouldn’t be “survival.” I do hear the above argument, that survival is fundamental, and for most people, important enough to justify not living the life you really want. Living in accordance with American Dream brand ethics, for the sake of survival maybe. Absolutely, that is definitely possible and obviously, even digestible. But to that, I would say that I often think that the only thing worse than the world becoming unsurvivable, is it continuing to be painfully or boringly survivable, as it is now. Survival looks like wearing straight people clothes to your job, not stealing your food when you’re still waiting for pay day, voting for your favorite warlord because this one might not take as many things away from me. Or you can THRIVE in it. Maybe one day I’LL get to be the warlord. Maybe one day I’LL get to be the one that ensures my employees act professionally.

For me, if rejecting representation means rejecting a mass forgiveness for my freakhood, I’ll do without it. It’s true, I will get drinks thrown at me from cars because I don’t ‘pass’ as a man or woman, or I will be kicked out of libraries or lose jobs or maybe even some family because of how I live my life. That won’t look like ‘survival’ in the way we’re talking about, and maybe at some point, it won’t be survival in any sense at all. But still, I can do better than forgiveness and tolerance. In fact I already have, in the eyes of the people close to me and to most strangers I get along with out in the world. Even the people I don’t get along with, the drink throwers, the hecklers, the assailants, do not tolerate me, in their own way. Good. I’m not a joint pain or a hole in your sock, I’m a human being and I don’t want a relationship with masses of strangers mediated through movies, news outlets, and law. I would rather live and relate to others honestly and defiantly.