It never fails. Every time there is critical resistance, an uprising and continued unrest people get dragged back to compliance (with permits) under the rhetoric of being peaceful or nonviolent. The movement gets dragged out of the street to sit attentively at the feet of the oppressors with speakers that tell us change will come if we are calm (and peaceful). Nevermind the normalized police escort, or the “security team”. We are just following the rules, nothing to see here.

Rhetoric about resistance and direct action becomes meaningless, lost in the symbolism of marching for civic change. Movement managers try to make the movement mainstream-popular, inviting celebrities and business leaders to come forward, while at the same time pushing out radical elements that released pressure valves to begin with. If not directly, through terrible tactical choices that alienate people (like working with the police who are critically engaged in counter insurgency and developing profiles on agitators to undermine the movement).

Never mind, that working with the city and police legitimizes those avenues, while making it easier for the police to knowingly divide and attack groups that take nonpermitted action or respond to their conditions without the permission of the state. Is this what solidarity looks like?

Instead of hearing about what groups are doing to sustain themselves during these uprisings, we hear more and more about demands. Police reforms that usually come with dangerous baggage, more technology and funding for the police. But the movement is so pressured by popular media and civic leaders to clarify its goals, policy change becomes a priority before much needed discussions can happen. Before policy change can be challenged not as a goal, but maybe a tactic to gain concessions in a larger fight to abolish the infrastructure that makes racial oppression profitable.

But once the movement is focused on policy change, containment is practically complete. And the agitators who were able to explore what it means to act autonomously for liberation, who were harassed and attacked by the police, are cast aside as unreasonable. Ungovernable.

Unity becomes language to gather behind and solidarity is reserved for those who will declare their nonviolence or tolerance for police collaboration. Never mind that nonviolence never actually was not violent- it just tolerates violence in the hopes of receiving change. It accepts violence as a means of determining justice- because if someone is constantly violated don’t they deserve to be saved?

What is liberalism? There are many ways people might define or apply it. But for now i’ll start with, peace for the sake of appearing peaceful regardless of whether the conditions are peaceful or not. Appealing to and supporting state violence (the government) to restore “peace” whether the conditions are peaceful or not. Working with the enemy to minimize the affects of oppression, while never supporting those looking to prevent or abolish it.

Redirecting the outrage and energy of people away from their own communities and into organizations that work with and support the state (and it’s violence). Taking real anger and pain, and neutralizing it so that it does not actually threaten the economic and social conditions that produced it. Believing that the state is the only way we will be free. Controlling how other actors behave so that the state will make you free. And finally, using peace as a reason to dismiss and silence people seeking critical movement building dialogue to prevent the co-optation of the movement. Demanding peace without first acknowledging the conflict is dismissive and heartbreaking. Same with #notallcops rhetoric.

The popular media finds it much easier to latch onto movement building for reform because the hierarchical political structure wants people to resign power over to representatives and allow those representatives to determine clear goals. And just like that the movement becomes less about supporting black solidarity and more about appealing to the dominant white (and liberal) gaze for approval.

But what if the goals aren’t clear? What if supporting black rage and insurrection means that all of it will have to fall? Especially the privileges and comforts gained by whites and non-black POC under the capitalist system built on genocide and slavery. The economy of wagery and servitude that makes (black) people poor and deprives them of resources. The system of governance and gender violence that pits (black) community against each other based on sexuality, gender and patriarchy power. The lack of empowerment and shared decision making. The lack of access to resources for those who are disabled by society. The political system itself, who carries on war after war here and abroad without the consent of the governed. The way problems are handled, policed and result in mass imprisonment and violence for poor, brown and black communities of color.

It’s not simple. But to build this movement we cannot oversimplify it. We cannot ignore that non-black and white people benefit from seeing this movement silenced or neutralized. And we can’t pretend that it doesn’t make whites uncomfortable to think about a black revolution. This might be a large reason why people in the movement fall back on learned liberalism. Because people, particularly people of color, have been taught that to assimilate in Amerikan culture means to behave, which has become synonymous with being “reasonable” or deferring to white models of power. But this is not reasonable, co-optation will fail and the conditions will fall. 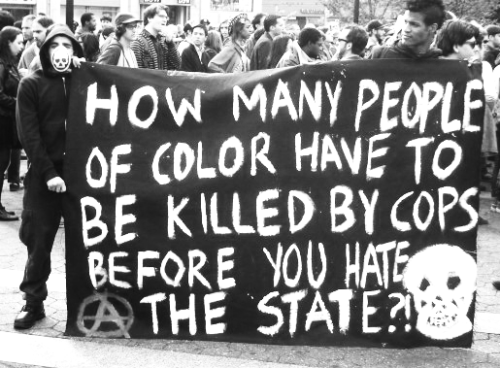