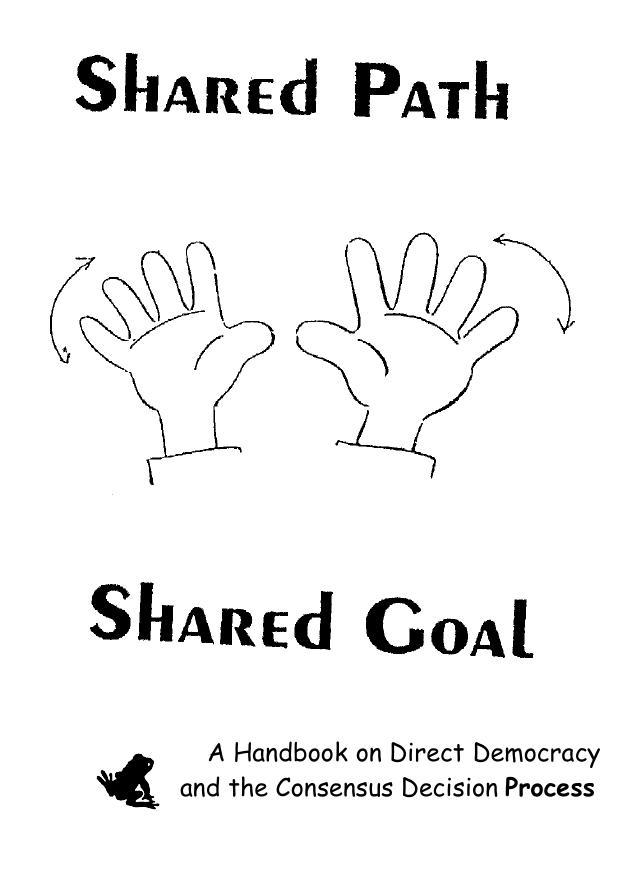 BOTH HANDS “FANNING” DOWN

FINGERS WRIGGLING IN FRONT OF THE FACE

Roles In the consensus process

Consensus is a decision making process designed to bring together the views of all the members of the group. Consensus does not require everyone to agree on everything, it does require a common goal of the group and wilingness to work on problems together. Consensus works if the group can work openly and creatively with concerns of individuals about proposals. The group reshapes proposals until everyone is comfortable with them.

This handbook gives some background information on consensus. There is a step-by-step model included, but this does NOT need to be followed exactly. Consensus is a flexible process, you should feel more than free to build new decision tools, modify the steps, add or change the roles as best fits the needs of your groups.

For the whole group to come to a decision requires a lot of communication, but not all communication requires words. These hand signals have been developed so we can express these key ideas without interrupting the speaker.

Just like in school, this means “I have a question/comment.” You should keep your hand up until the facilitator sees it and recognizes you. When many people raise their hands, the facilitator will make a list and call on people in order.

It is clear what you want to say, for me you don’t have to continue with this point. This indicates to the speaker, that it is clear what she/he said and that she/he can stop talking further.

This sign is developed to help the speaker; not to criticise what she/he says. Also the facilitator can react, when a lot of people use this sign, by stopping the speaker.

This means “I have a technical remark [process suggestion]”. Use this sign when you have an idea how the group can come to a decision through some other tool or method (like using a straw poll or breaking into groups to solve different parts of the problem). Usually, a facilitator will call on this sign before others, because a good process suggestion can save a lot of talk. Be sure NOT to use this sign when you are going to talk about the issue directly (then use one raised open hand).

BOTH HANDS “FANNING” DOWN

This means “Slow down, you’re talking too fast”.

Especially good to use with native English speakers who have forgotten not everyone was bom that way.

FINGERS WRIGGLING IN FRONT OF THE FACE

This means “I’m contused”. The speaker should try to use other words and explain simply and shortly what he or she is trying to say.

The symbol for consensus: “I agree” or “this sounds like a good idea”.

When the facilitalor tests for consensus and only sees waving hands, we have a decision. It is also a positive silent expression. It can be useful when someone comes up with a good idea and when the facilitator sees everyone waving — they know we are near consensus.

The symbol of protest, it means “No! Stop! I block this idea.” If a proposal is presented and the facilitator asks for comments, the raised fists will get first attention- There is no consensus without everyone’s agreement and these strongest objections should be heard first.

This symbol can also be used when you have very strong negative feelings about what the speaker is saying. However, you need to be most careful about this sign. Before you block, be sure you understand what is being said, for the entire group’s attention will focus on you once you raise your fist. If several fists go up at once, time can be saved by stopping a bad idea before it is explained in detail.

Perhaps the strongest argument for the need for a “new” decision-making method is the world around us which has been created by the “old” methods. In a world governed by consensus, nuclear weapons, the genocide and mistreatment of indigenous people, the attack on the environment and the madness of war would be impossible – they would be blocked by you and me and millions of others.

Consensus grew out of a critique of the existing decision methods which tend to hold power in the hands of a few and make decisions based often on corrupted values.

Consensus attempts to give the maximum power to the individual while giving us the possibility to include as much of our shared experience, knowledge and wisdom in our decisions as possible. The need for consensus is based upon the experience that every decision based on simplifications of truth (using models) bares the danger of missing important points. More opinions and input make a better picture. Combining input from more people also optimises synergetic effects.

Consensus models give a larger opportunity to motivate people to become involved in things they are part of than other decision models.

Roles In the consensus process

Facilitator — this is the most important role in the process. The facilitator has several responsibilities:

Facilitators are NOT chairpersons: they do not break ties and are not the “leader” of the group.

The facilitator needs to have a good enough understanding of the steps of the process and the tools of group decision making to guide the group to a consensus. Facilitators should avoid statements like “How does the group want to deal with this?” which leads to talking about talking, which bogs down the process even more. Choosing to be a facilitator usually removes you from the decision making process with respect to your own views; your attention needs to be on gathering the group’s views rather than your own agenda. You have to trust on the fact that in a good running group, someone else will come with your opinion anyway.

Occasionally, a facilitator wil personally feel the need to contribute to the decision, if they need to do this for more than a short time, they should let someone else take over facilitating. Good facilitators gently but forcefully push the group through the steps of the process; when the group appears converging on an idea, he or she tries to draw out a proposal for it and address most the serious concerns with it first.

There are several other important roles, listed on the following page.

The facilitator should generally not take these.

“Vibes” Watcher — responsible for looking out for emotional issues in the group. Especially things like people who feel over run by the group or put down by another individual. The vibes watcher usually operates by getting high priority recognition by the facilitator and checking in with someone who they suspect is not feeling okay. If they are not okay, the group then has the responsibility for taking care of them.

Time Keeper — the group designs an agenda with specific amounts of time allotted for each item. The time keeper informs the group when they have exceeded these limits. The facilitator may ask the group if it wants to contract for more time.

Brainstorms — this technique is an attempt to get at raw ideas. People just throw things out and they are caught by the note taker. Try to avoid making fully formed proposals in this section.

Go Rounds — the facilitator takes a specific issue and asks everyone in the group to discuss it briefly. While this is a bit slow, it ensures some input from everyone (w/o feeling put on the spot, because everyone is doing it),

Small Groups — especially good in large meetings, breaking into small groups can let more people talk. Then the small groups can decide what the most important things are and come back to the bigger group with a list of key ideas or proposals.

Role Plays — this tool is can be used to break through communication troubles within your group, and for internal mediation. One technique is for people who have difficulty to switch their roles and try to represent the others view for some fixed time. Afterwards, each person states the key points they noticed as players and group.

Fish Bowls — this technique facilitates conversation in a large group. A handful of chairs (3 to 5) are set up facing each other and only the people in the chairs can talk. The rest of the group stands around them in a circle. When someone is finished they can get out of the chair and free it up. In this situation, the facilitator does not control who speaks, thus “desirable” arguments can occur.

Straw Polls — this is a valuable tool for finding out where the group is. It is basically a non-binding vote on an issue. It is particularly useful if a few people dominated the conversation.

Breaks — People don’t usually think of taking time off as a tool for helping a meeting go better, but it can be very useful. Especially if you are working on a difficult problem for a while, a well-chosen rest can help to diffuse tension and give some analytical distance from the problem. Breaks also give room for people to talk briefly in private and remind people that there is life outside of this meeting.

There are three philosophical keys to consensus Respecting Feelings: If someone feels like the group is going the wrong way, the facilitator and other s in the group should explore these feelings. It is completely wrong to say “you can’t describe why you feel that way, so it is not important” — it is this kind of insult that disempowers people.

Empowering people: Ideally, we use our decision making process to strengthen members of our group. We should rotate roles like facilitation so people become more experienced and can teach others. Consensus is about moving power away from the good talkers and fast thinkers and sharing it with everyone.

No Bosses: There is a nice saying: “Who needs to be bossed around when you can manage yourself.” Consensus is about living this dream. We can choose coordinators or organizers temporarily when we need them, but the ultimate power needs to come from the group, not someone on top telling others what to do. Direct democracy means taking responsibility for our own decision and our own lives.