Dystopias Now
The end of the world is over. Now the real work begins.

Dystopias are the flip side of utopias. Both of them express feelings about our shared future; utopias express our social hopes, dystopias our social fears. There are a lot of dystopias around these days, and this makes sense, because we have a lot of fears about the future.

Both genres have ancient lineages. Utopia goes back to Plato at least, and from the start it had a relationship to satire, an even more ancient form. Dystopia is very clearly a kind of satire. Archilochus, the first satirist, was said to be able to kill people with his curses. Possibly dystopias hope to kill the societies they depict.

For a while now I’ve been saying that science fiction works by a kind of double action, like the glasses people wear when watching 3D movies. One lens of science fiction’s aesthetic machinery portrays some future that might actually come to pass; it’s a kind of proleptic realism. The other lens presents a metaphorical vision of our current moment, like a symbol in a poem. Together the two views combine and pop into a vision of History, extending magically into the future.

By that definition, dystopias today seem mostly like the metaphorical lens of the science-fictional double action. They exist to express how this moment feels, focusing on fear as a cultural dominant. A realistic portrayal of a future that might really happen isn’t really part of the project—that lens of the science fiction machinery is missing. The Hunger Games trilogy is a good example of this; its depicted future is not plausible, not even logistically possible. That’s not what it’s trying to do. What it does very well is to portray the feeling of the present for young people today, heightened by exaggeration to a kind of dream or nightmare. To the extent this is typical, dystopias can be thought of as a kind of surrealism.

These days I tend to think of dystopias as being fashionable, perhaps lazy, maybe even complacent, because one pleasure of reading them is cozying into the feeling that however bad our present moment is, it’s nowhere near as bad as the ones these poor characters are suffering through. Vicarious thrill of comfort as we witness/imagine/experience the heroic struggles of our afflicted protagonists—rinse and repeat. Is this catharsis? Possibly more like indulgence, and creation of a sense of comparative safety. A kind of late-capitalist, advanced-nation schadenfreude about those unfortunate fictional citizens whose lives have been trashed by our own political inaction. If this is right, dystopia is part of our all-encompassing hopelessness.

On the other hand, there is a real feeling being expressed in them, a real sense of fear. Some speak of a “crisis of representation” in the world today, having to do with governments—that no one anywhere feels properly represented by their government, no matter which style of government it is. Dystopia is surely one expression of that feeling of detachment and helplessness. Since nothing seems to work now, why not blow things up and start over? This would imply that dystopia is some kind of call for revolutionary change. There may be something to that. At the least dystopia is saying, even if repetitiously and unimaginatively, and perhaps salaciously, Something’s wrong. Things are bad.

Probably it’s important to remember the looming presence of climate change, as a kind of techno-social disaster that has already begun and which will inundate the next couple of centuries as some kind of overdetermining factor, no matter what we do. This period we are entering could become the sixth mass extinction event in Earth’s history, and the first caused by human activity. In that sense the Anthropocene is a kind of biospheric dystopia coming into being every day, partly because of the daily activities of the bourgeois consumers of dystopian literature and film, so that there is a nightmarish recursive realism involved in the project: not just Things are bad, but also We are responsible for making them bad. And it’s hard not to notice that we’re not doing enough to make things better, so things will get worse too. Collective political action is necessary in order to make things better; fixing the problems will require more than personal virtue or renunciation. The collective has to change, and yet there are forces keeping the collective from seeing this: thus dystopia now!

It’s important to remember that utopia and dystopia aren’t the only terms here. You need to use the Greimas rectangle and see that utopia has an opposite, dystopia, and also a contrary, the anti-utopia. For every concept there is both a not-concept and an anti-concept. So utopia is the idea that the political order could be run better. Dystopia is the not, being the idea that the political order could get worse. Anti-utopias are the anti, saying that the idea of utopia itself is wrong and bad, and that any attempt to try to make things better is sure to wind up making things worse, creating an intended or unintended totalitarian state, or some other such political disaster. 1984 and Brave New World are frequently cited examples of these positions. In 1984 the government is actively trying to make citizens miserable; in Brave New World, the government was first trying to make its citizens happy, but this backfired. As Jameson points out, it is important to oppose political attacks on the idea of utopia, as these are usually reactionary statements on the behalf of the currently powerful, those who enjoy a poorly-hidden utopia-for-the-few alongside a dystopia-for-the-many. This observation provides the fourth term of the Greimas rectangle, often mysterious, but in this case perfectly clear: one must be anti-anti-utopian.

One way of being anti-anti-utopian is to be utopian. It’s crucial to keep imagining that things could get better, and furthermore to imagine how they might get better. Here no doubt one has to avoid Berlant’s “cruel optimism,” which is perhaps thinking and saying that things will get better without doing the work of imagining how. In avoiding that, it may be best to recall the Romain Rolland quote so often attributed to Gramsci, “pessimism of the intellect, optimism of the will.” Or maybe we should just give up entirely on optimism or pessimism—we have to do this work no matter how we feel about it. So by force of will or the sheer default of emergency we make ourselves have utopian thoughts and ideas. This is the necessary next step following the dystopian moment, without which dystopia is stuck at a level of political quietism that can make it just another tool of control and of things-as-they-are. The situation is bad, yes, okay, enough of that; we know that already. Dystopia has done its job, it’s old news now, perhaps it’s self-indulgence to stay stuck in that place any more. Next thought: utopia. Realistic or not, and perhaps especially if not.

Besides, it is realistic: things could be better. The energy flows on this planet, and humanity’s current technological expertise, are together such that it’s physically possible for us to construct a worldwide civilization—meaning a political order—that provides adequate food, water, shelter, clothing, education, and health care for all eight billion humans, while also protecting the livelihood of all the remaining mammals, birds, reptiles, insects, plants, and other life-forms that we share and co-create this biosphere with. Obviously there are complications, but these are just complications. They are not physical limitations we can’t overcome. So, granting the complications and difficulties, the task at hand is to imagine ways forward to that better place. 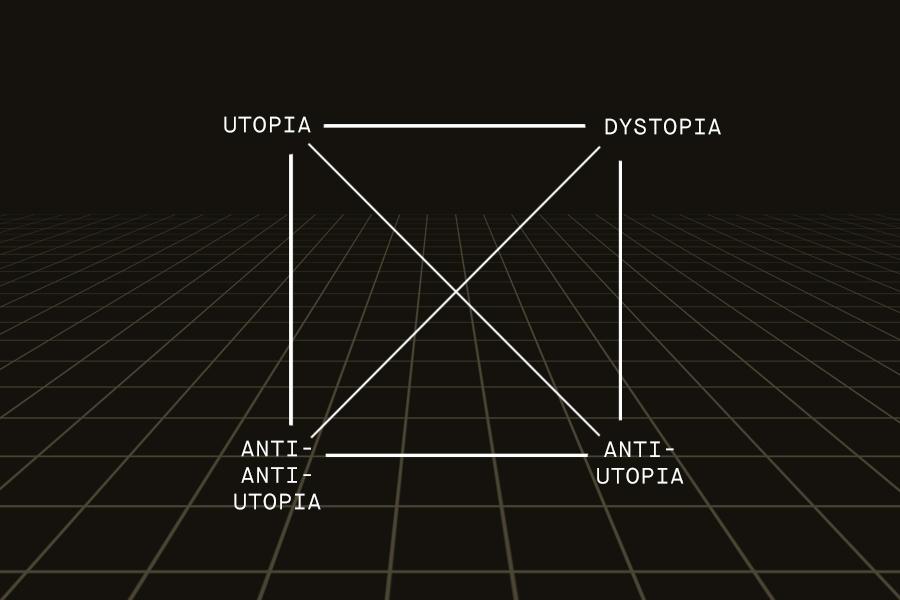 Immediately many people will object that this is too hard, too implausible, contradictory to human nature, politically impossible, uneconomical, and so on. Yeah yeah. Here we see the shift from cruel optimism to stupid pessimism, or call it fashionable pessimism, or simply cynicism. It’s very easy to object to the utopian turn by invoking some poorly-defined but seemingly omnipresent reality principle. Well-off people do this all the time.

Clearly we enter here the realm of the ideological; but we’ve been there all along. Althusser’s definition of ideology, which defines it as the imaginary relationship to our real conditions of existence, is very useful here, as everywhere. We all have ideologies, they are a necessary part of cognition, we would be disabled without them. So the question becomes, which ideology? People choose, even if they do not choose under conditions of their own making. Here, remembering that science too is an ideology, I would suggest that science is the strongest ideology for estimating what’s physically possible to do or not do. Science is AI, so to speak, in that the vast artificial intelligence that is science knows more than any individual can know—Marx called this distributed knowing “the general intellect”—and it continually reiterates and refines what it asserts, in an ongoing recursive project of self-improvement. A very powerful ideology. For my purpose here, I only invoke science to assert that the energy flows in our biosphere would provide adequately for all living creatures on the planet today, if we were to distribute them properly. That proper distribution would involve not just cleaner, ultimately decarbonized technologies—these are necessary but not sufficient. We would also have to redefine work itself to include all the activities now called social reproduction, treating them as acts valuable enough to be included in our economic calculations one way or another.

An adequate life provided for all living beings is something the planet can still do; it has sufficient resources, and the sun provides enough energy. There is a sufficiency, in other words; adequacy for all is not physically impossible. It won’t be easy to arrange, obviously, because it would be a total civilizational project, involving technologies, systems, and power dynamics; but it is possible. This description of the situation may not remain true for too many more years, but while it does, since we can create a sustainable civilization, we should. If dystopia helps to scare us into working harder on that project, which maybe it does, then fine: dystopia. But always in service to the main project, which is utopia.

Kim Stanley Robinson is an American science fiction writer. He is the author of more than twenty books, including the international bestselling Mars trilogy, and more recently New York 2140, Aurora, Shaman, Green Earth, and 2312, which was a New York Times bestseller nominated for all seven of the major science fiction awards—a first for any book. His work has been translated into 25 languages, and won a dozen awards in five countries, including the Hugo, Nebula, Locus, and World Fantasy awards. In 2016 he was given the Heinlein Award for lifetime achievement in science fiction, and asteroid 72432 was named “Kimrobinson.”