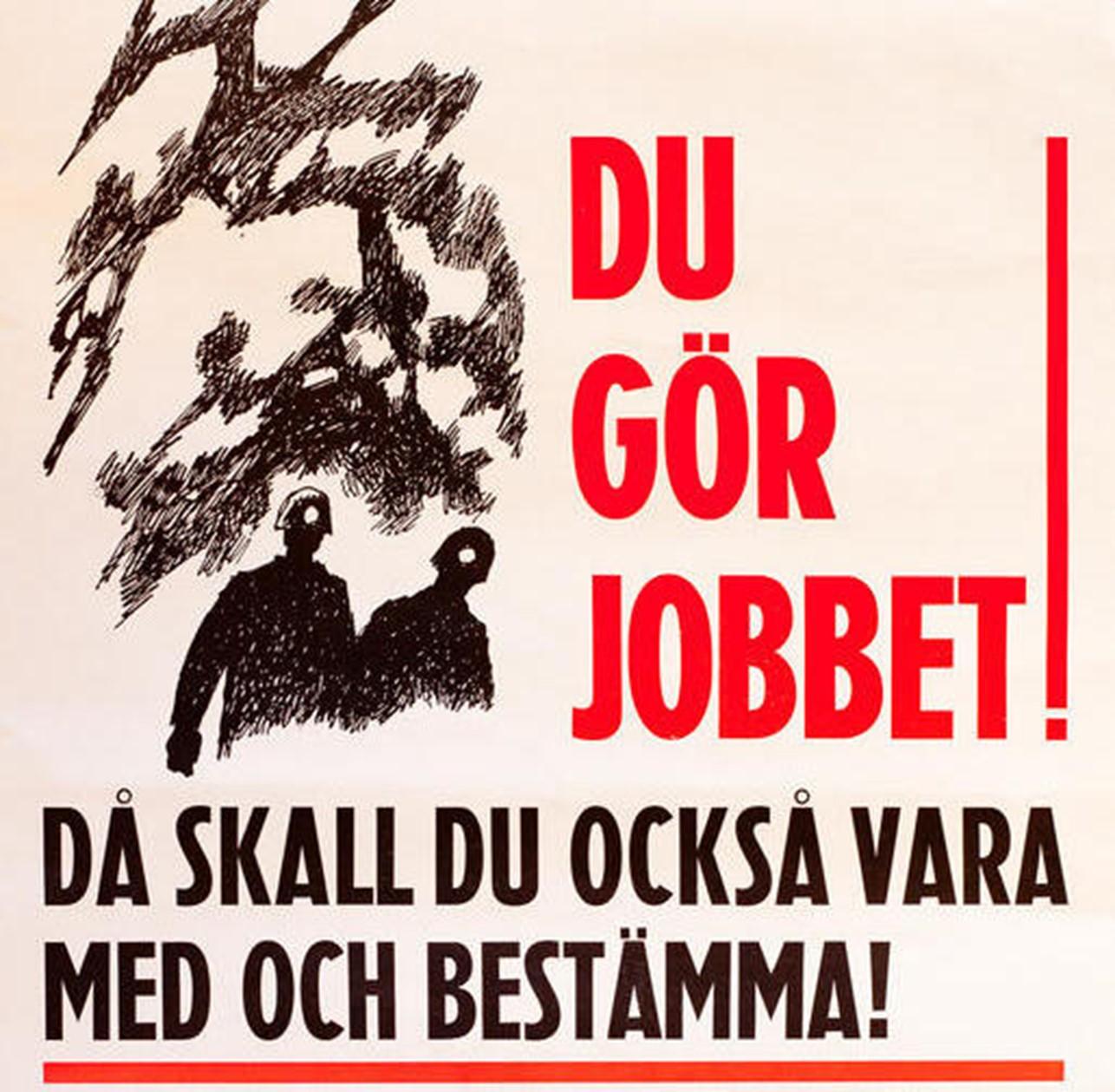 Rasmus Hästbacka and Kristian Falk of the Swedish syndicalist union SAC (Sveriges Arbetares Centralorganisation , or Central Organization of the Workers of Sweden) argue for a third path between the “consensus fundamentalism” of Sweden’s mainstream labor bureaucracy, and the “romanticization” of strikes among the grassroots — namely, re-learning how to build pressure within the workplace.

What is a trade union movement? It is reasonable to say that it consists of co-workers in motion, colleagues who stick together and act together. This has to be distinguished from union bureaucracy i.e. representatives above the rank and file, and paid union officials outside the collective of workers. In the Swedish labor market we have small, scattered islands of a trade union movement in the shadow of big union bureaucracies. These islands include the syndicalist SAC, the Swedish Dock Workers’ Union, and some local job branches within the central bureaucracies LO (Landsorganisationen i Sverige aka National Organization in Sweden), TCO (Tjänstemännens Centralorganisation or Confederation of Professional Employees) and Saco (Sveriges Akademikers Centralorganisation or Swedish Confederation of Professional Associations).

A rebirth of the Swedish movement is hindered by “consensus fundamentalism”: a single-minded focus among top union officials on coming to consensus (samförstånd) with employers through collective agreements. But for decades, employers have been seeking that consensus at a higher and higher price to labor. Now a labor market slum is growing in Sweden, with conditions similar to those at the beginning of the 20th century: dangerous working environments, very low wages and simply criminal employers.

While the LO, TCO and Saco top officials suffer from consensus fundamentalism, opposition among the grassroots often suffers from a fixation on strikes. Among the grassroots labor movement in Sweden, a call for big strikes or even a general strike is often heard. Strikes were called in response to the current attack on the Swedish Employment Protection Act, low wages, and attacks on the right to strike. In 2019, an attempt was made to stage a symbolic strike to highlight the climate crisis. As far as we are aware, no workplace was shut down.

It should be acknowledged that sometimes we SAC members also have gotten lost in strike fixation and have tried to rush strikes into existence. An example is a strike in defense of the Unemployment Insurance Funds in 2006, which were being attacked by the Swedish government. It ended in a painful defeat.

Strike frequency in Sweden has actually been very low since the early 1990s and the call for strikes tends to be caught up in fantasy. The organizers of these would-be strikes romanticize images of French strikes, or those in Sweden before the Second World War. But a high strike frequency should not be fetishized, and it has no value in itself, if it achieves no results. It is an unfortunate myth that the strike is always the best weapon of employees.

An important but little-known fact is that the syndicalist SAC has a tradition of skepticism about strikes. This was expressed as early as in the 1910 Manifesto to the Workers of Sweden, issued by the SAC. Labor struggles should not be reduced to a struggle of “crossed arms,” the Manifesto states, and “that time is long gone, when it was enough to just throw the shovel and the planer aside and prescribe the peace terms to employers.” Strikes are often costly and protracted, the syndicalists argued, and vulnerable to strike-breaking and lockouts. Swedish employers often responded with solidarity lockouts in many industries.

The goal of lockouts was not only to win the immediate conflict. Political scientist Peter A. Swenson talks about a longer-term goal:

They [the lockouts] gave organized capital in Sweden the ability to hammer unions into a shape that made them useful as partners in centralized regulation of labor markets. The leadership of the unions, closely tied to the Social Democratic party, was by no means fully resistant to movement in the direction employers wanted to go. What stood in their way was lack of control over decentralized militancy in the ranks. Consequently […] labor leaders may have sometimes welcomed lockouts, or threats thereof. The rattling of employers’ mighty sword gave them an ideologically respectable pretext to intervene against disruptive rank-and-file militancy.

During the strike peaks of the 1920s, Swedish syndicalists became even more skeptical of strikes of the “all-out” type. Syndicalists emphasized struggle on the inside, union employment services (hiring halls), and increasing the influence of workers over the management of workplaces. Fighting on the inside could take the form of, for example, collective slow-downs. Union employment services [hiring halls — Ed] meant employers had to employ workers in the order and under the conditions dictated by the unions or else get no labor power. When these services were effective, they allowed workers and the unemployed to pursue common demands against the employer side.

In SAC’s education programs, we have become better at emphasizing that the road to successful strikes is usually long. The first baby step may be for workers to break the silence. Perhaps workers demand more influence over scheduling. After that, they may move on to a petition for free workwear. If workload is high, the next step may be to argue for more people to be employed. If management is not receptive, it may become appropriate to refuse overtime.

It takes time to build up the ability to pressure employers. This is what the fixation on big strikes overlooks. Colleagues need to test their ability to win small battles to see if they are ready for the next step.

Below we provide a selection of alternatives to striking that also help build up the capacity to strike. The alternatives can be categorized into four different types of pressure: moral, psychological, economic, and legal.

Applying moral pressure means that workers appeal to the bosses’ will to do the right thing according to their own moral perception, or the will to be perceived as fair in the eyes of the staff. Some examples of this are questioning decisions at staff meetings, conducting surveys among employees and criticizing management’s actions in a union workplace paper.

The moral pressure becomes a kind of punishment through shaming of the bosses. Of course, it often happens that bosses do not care that they are perceived as unfair. Some have no shame. Then the moral pressure does not bite, but perhaps psychological pressure will do the trick.

Psychological pressure is about creating inconveniences for shameless bosses, to create a stressful situation for them. One example is to issue union warnings to bosses who have treated colleagues badly. According to Swedish labor law, legally only employers can issue discipline. But that does not prevent the union from giving written warnings to bosses and making that warning visible to all employees.

Another example is to strike a wedge between bosses. Employees can try to ally with bosses who are receptive to workers’ demands against negative bosses. The workforce can also visit higher-level executives to persuade them to put pressure on lower-level executives.

Another variant of psychological pressure is to distance oneself from management. The bosses are then made to understand that workers do not want to deal with them until they have come to their senses. Some examples are boycotting the company party, arranging Christmas dinners without bosses or skipping a company trip.

To exercise economic pressure means that workers reduce the employer’s revenue or drive up the costs, but not only that. It can also mean throwing gravel into management’s machinery. How can this be done?

One method is work-to-rule. This means following current rules in the workplace to the letter so that work is delayed.

Another method is sometimes called union outsourcing. This means that you pressure an employer by influencing another employer who has some connection to the first employer. An example may be that a labor conflict arises at a cleaning company that is hired by other companies. The management of the cleaning company may be pressured by a union notice to the customer businesses.

The most well-known forms of economic pressure are strikes and blockades. While strikes usually mean stopping all work, a blockade means refusing to perform certain parts of the labor process. It is also called partial industrial action in Swedish labor law.

To block the employment of new labor power is an appeal for solidarity directed at jobseekers. They are urged not to accept employment in the workplace until the conflict is resolved. Jobseekers then have a right to neutrality, according to Swedish law, which means that the Public Employment Service must not direct jobseekers to that workplace.

A method called the good strike or good blockade has occurred in the service sector. This means that employees provide the user or consumer side with a better or cheaper service at the employer’s expense. This can be done, for example, by employees only performing tasks close to the customer and ignoring other tasks.

Struggle through unions is a struggle of producers. It can be combined with consumer actions, provided that producers call for such actions. Consumer boycott is a well-known method, but its opposite is less known. The opposite is called a union label in English. This means that unions certify employers who live up to certain requirements and recommend consumers buy from them.

Legal pressure, finally, may become relevant when employers break laws and agreements. According to Swedish labor law, legal pressure is exerted mainly through private enforcement. The union then activates a collective bargaining process about the legal dispute on the basis of the Co-determination Act (in Swedish abbreviated: MBL – Medbestämmandelagen). The union demands that a certain rule be followed under the threat of a lawsuit to the Labour Court. However, it is best if the workforce can retain control of the case in the workplace and combine legal pressure with other types of pressure.

On the long road to staging a strike, a collective of workers may well discover that alternatives to striking work better than striking in their workplace. It is the results that count. The goal is a more humane working life and society.

Within SAC, central union officials have a duty to assist if local chapters decide to go on strike; the duty is there even if officials are skeptical of the strike. At the same time, local chapters are wise to think carefully about the prospects of winning a strike.

Workplace organizing is rarely a bed of roses but in general it can be said that humour strengthens the fighting spirit. In the memoirs of the Swedish syndicalist John Andersson, a story is told about a wage dispute in the port of Gothenburg in 1912.

The dock workers carried out slow-downs. Foremen were sent down to the hold to speed up the pace. The workers responded by working even slower and singing the Christian hymn: “The prince of darkness is descending.” The foremen got tired and when they climbed up the ladder the workers sang the hymn: “Your bright sun rises again.”

You say you want a general strike by Marianne Garneau
The author takes a critical look at general strikes in Europe and considers what it would take to import the tactic to North America.

No more fake strikes by Joe Burns
The author takes a critical look back at the many “general strikes” called in recent years.

Big strikes and the sabotage of the labor movement by Marianne Garneau
The author challenges the current focus on bringing back large strikes, arguing that the wellspring of labor militancy historically has been worker-led action on the shop floor.