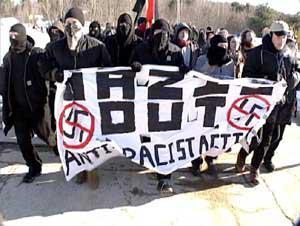 WCC (World Church of the Creator), who surprisingly worked with NA (National Alliance) on this one, picked a good town to stir up racism in. It is no surprise that the WCC is trying to channel attitudes toward the recent influx of Somali residents into racist ideology. When city officials (i.e. Mayor Raymond) make blatantly racist statements against the Somali people, and the Lewiston police department participates in their own hate crimes against local Somalis, it makes it easier for people in the community to think that being racist is normal and the answer to the city’s problems.

There were enough locals riding the fence that came out to the National Guard Armory (yeah, the State protects Nazis) on Saturday to make us feel that there was much dialogue needed that day and beyond. Some of the questions raised by locals, who came to see if racist ideology was the answer to the economic problems of Lewiston, included: “Why can’t I get a business loan? A Somali can just move here and get one, easy,” “I need more food stamp money. Why do they get our food stamp money?,” and “We need housing. We were here first. Why do they get places to live?” These are all relevant and pressing questions to be asked within the community, wrongly assumed and misdirected of course, but nonetheless, onto something. And you can imagine what the dialogue consisted of-the conclusion being, “So, what you’re saying is you’re really pissed at the government.” The point is, the people who showed up on Saturday asking these questions really didn’t want to walk away with racism being the answer to their economic despairs. Racism is being fed to these folks as an answer, like it is in other cities facing similar issues. It felt good to able to dialogue with locals who came out on Saturday, and begin erasing the racist connection being made by fascist groups such as the WCC, NA, and the State, to immigration and poverty within the US. The ability to do this is always hindered when you have a contingent of people who are seen as outsiders (out-of-towners), and militants nonetheless, coming to expel racist groups from a city they don’t live in. All in all, we were productive.

We were expecting the rookie (in regards to having previously dealt with a specifically fascist vs. Antifa rally) pig force of Lewiston to be able to utilize their special training for our arrival, and the following precautions were to be employed by them: the confiscation of flag or sign poles, backpacks, cameras that weren’t given previous press clearance (because you know how terrorists like to hide bombs in cameras?!), and random searches. No protesters were permitted to be in radius of the National Guard Armory, and were going to be directed to two ‘park and rides’ half a mile down another street. Roads were going to be blocked off, and ID’s checked upon rerouting traffic to the park and rides.

The following is what (we believe) we did successfully on Saturday January 11th:

Deciding to use Black Bloc tactics was an advantage on our part. With this situation at hand, the contingent of Antifa decided to employ Black Bloc tactics (it is specifically important here that we decided to march in formation, and elected a tactical facilitation core). We would like to suggest that those interested in carrying out Bloc tactics read the pamphlet ‘A Communiqué on Tactics.’

By wearing black, masking up, and marching in a tight rectangular formation with banners on all sides, we looked intimidating to the pigs. The first road block consisted of three cop cars and six or so pigs. All but one stood there staring, while the “ranking officer” approached us. The banner was lifted right over his head, and wouldn’t you know-he found himself right in the middle of the Bloc. Piece of cake. (Here, this worked well. In another situation, where the police are our primary combatants, we should never allow an enemy in our midst except to physically deal with them.)

The next barricade consisted of two city dump trucks and a few cop cars. It looked tough and could have been, but we never paused and just kept moving forward. The drivers of the trucks were working people. One driver waved to us, while the other backed up just a little. We moved on through.

Momentum and attitude. Deciding to wear masks can work against a group if it wishes to appear friendly. But we did a good job of being conscious of our visual appearance. When we passed the protesters who were stuck at the park and ride, we enthusiastically invited them to join us. A Bloc of only 50 quickly turned into about 300 when seemingly everyone from the two park and rides joined us!

It should be noted that the diversity rally had 5,000 attending! This is remarkable for a New England town of 30,000+.

Deciding that talking to the media was an autonomous decision. This decision proved worth it in this type of situation. Talking to the media sparked conversations with locals who were standing right next to us. Our openness to talk, and the dialogue that followed, helped to dispel the myths built up around our arrival. We are not trouble making hooligans! We believe in direct confrontation when it comes to Nazis attempting to organize, we go where they go, and will never let them have the streets.

Community outreach. Without doing the community outreach necessary, we all could have very well been unaccepted by the local activists. It is absolutely necessary to make this a priority BECAUSE we intend to win. Without going to Lewiston, we would not have learned firsthand of the economic and social situation in the area, nor would we have been able to distribute our agitational literature properly. Also, without this connection, organizers in Lewiston may not have felt comfortable keeping us up to date on planning information, or taken us seriously for that matter. Questions came from both sides of the organizing, and our ability to work together, and share as much information as possible helped alleviate some concerns organizers were facing.

Broader outreach. The call to action GMAC put out was done so in a timely manner, which allowed for an extensive email dialogue to occur between us and others interested in opposing racism who were not in ARA / NEFAC.

The following are constructive criticisms of what (we believe) we could have done better in Lewiston:

More community outreach. As always, more people could have gotten involved in community outreach. Flyering and door to door outreach are always time consuming (and very cold when it’s January in Maine), but necessary to personalize our position regarding Nazi and fascist organizing. Also, a flyer should have been made for the Bloc to hand out during the rally.

Translation. All of the documents we handed out should have included a Somali translation. French translations would have been helpful too in Francophone neighborhoods. Years ago, the Quebecois were being targeted in Maine similar to the ways Somalis are now. Lewiston locals told us that there still are French speakers in the area, who may relate to this if we put out some French text prior to the action.

Literature should travel with the Bloc. ‘Why we wear masks,’ and ‘why we believe in directly confronting fascism’ are two flyers that come to mind.

Preparedness for the next step. We were so ready for not being able to achieve our goal without an intense clash with the pigs (ending up in front of the armory, where we try to disrupt from outside and would wait for the Nazis to exit) that we did not prepare for the next level. So....what do we do now? We should have planned for the next level. Such planning would have been a little abstract, as it turned out that the boneheads had a choice to be escorted out the back door with the WCC keynote speakers and the ashamed local attendees (avoiding ARA & NEFAC) and they choose this over confronting us.

A question: Should we have confronted the first Nazi that came to us? GMAC had the front, and the capabilities to do so. Did we do the right thing by shoving him, and moving on?

All in all, we believe we were generally successful with the circumstances at hand. There is always room for improvement, but given the numbers we had we sure did do an amazing job at tearing through the streets. Good work everybody!