Then and now
The Spanish Revolution of 1936

July 19 marks the 85th anniversary of the Spanish Revolution.

This seems an opportune time, then, to reflect on multiple aspects of that revolution. It began as a response to an attempted right-wing military coup against the legally-elected left-wing government, unfolded in the midst of a brutal civil war, and came to an end with the victory of fascist armies in the spring of 1939.

Although conditions—both in Spain and elsewhere have changed dramatically in the years since, there are lessons to be learned from the efforts of worker-led organizations to confront the right-wing challenges of their day.

First, something about the context. Anarcho-syndicalism had been growing in Spain since the last quarter of the 19th century. By 1936, the movement was comprised of a powerful labor union organization (the Confederación Nacional del Trabajo, CNT, National Confederation of Labor) that counted roughly one million workers among its members; an affinity group-based anarchist organization (the Federación Anarquista Ibérica, Iberian Anarchist Federation, FAI); and a youth organization (Federación Ibérica de Juventudes Libertarias, FIJL, Iberian Federation of Libertarian Youth).

These organizations had affiliates in many areas of the country, but were especially strong in Catalonia, Valencia, Aragon, and Andalucía. A network of journals, newspapers, schools emphasizing free thought, storefront cultural centers, and community/neighborhood-based organizations extended movement influence considerably beyond conventional workplaces, and allowed its anti-hierarchical message of direct action, collective self-help, and anti-authoritarianism to reach both men and women, employed and unemployed, adults and youth.

Importantly, however, although movement organizations had committed themselves from early dates (1872, 1910, and again in 1936) to the equality of men and women as a central component of anarchist/libertarian theory and practice, the day-to-day reality on the ground was quite different.

Most movement organizations, especially labor unions, even in industries such as textiles, where female workers were the majority, were dominated by men. Women workers were often paid lower wages, ignored or ridiculed if they tried to speak in meetings, and dismissed as potential movement leaders or activists.

Accordingly, as early as the mid-1920s, when the CNT unions were still operating clandestinely, and then well into the early 1930s, groups of mostly young anarchist women in Madrid, Barcelona, and elsewhere who had felt marginalized in their organizations, began to meet among themselves to discuss what they could do to empower other women and to challenge their male comrades to live up to the officially-stated commitments to equality.

In early 1936, a group in Barcelona that called itself Grupo Cultural Femenino, CNT, rented a hall in Barcelona and held a mass meeting to address issues of women’s subordination. Participants came from all over the country included among them, Lucía Sánchez Saornil and Mercedes Comaposada, who had met in Madrid and started talking and organizing women there. Together, they decided to form an organization to address the “triple enslavement” of women (to ignorance, to capital, and as women); shortly thereafter, the first issue of a new journal, Mujeres Libres (Free Women) appeared.

Much of the historiography of the Spanish Civil War presents it as a battle of Communists vs. fascists for the preservation of republican democracy in Spain. But the reality is that the initial attempted right-wing coup (led by four generals, among them, Francisco Franco) was meant to overthrow the liberal Popular Front coalition that had been elected in April 1936.

The opposition to the coup was led by revolutionary popular organizations, both socialist and anarchist, that took to the streets, stormed armories for weapons, and defeated the right-wing rebels in many major cities. What followed was complex.

Many of the landowners and factory owners who sympathized with the rebels abandoned their properties and fled to the rebel-held zone. This enabled union-based organizations, especially in Barcelona, Valencia and Aragon, to take over workplaces—both rural and industrial—and run them collectively under systems of worker control. In Aragon, in particular, many small agricultural holdings were collectivized.

In many parts of Catalonia, Aragon and Valencia, municipal services were taken over by workers, and reorganized to serve the people who were left in the cities and to organize the provision of food and other necessities. Workers took over factories and repurposed them to produce war materiel.

Men, and some women, left the cities to join people’s militias to fight the fascist rebels. Whole systems of social organization were created, virtually overnight.

Meanwhile, internationally, the so-called democratic nations of the west mostly watched and waited. In August, England, France, the U.S., the USSR, Germany and Italy signed a non-intervention agreement, pledging not to send arms or war materiel to either side in the fighting, but Germany and Italy announced almost from the outset that they would not abide by it.

In fact, German and Italian arms and soldiers started pouring into Spain in support of the fascist rebels almost immediately. Germans tested their carpet-bombing techniques (later to be used during WWII) on Guernica and Madrid. Troops from both countries supported the rebel military’s effort to crush the left-wing and anarchist resistance.

Meanwhile, the U.S., UK and France refused aid to the Republic, which was left dependent on the USSR and Mexico for the purchase of arms to try to defeat the rebellion. Over time, that dependence dramatically increased the power of the previously very weak Communist Party in Spain, and eventually led to government efforts to stem the revolution in the name of fighting fascism first.

Contemporary left organizations around the world are confronting a somewhat similar, and often hostile, political, economic and cultural climate. Economic inequality is increasing everywhere. Exacerbated by COVID-related deaths and dislocations, the forces of international finance have been pushing hard against programs that would mitigate the worst consequences of that inequality.

Today’s so-called populist resentment that we are witnessing internationally has been fueled precisely by frustration with economic restructuring and a sense that dominant political elites are not paying sufficient attention to those most hurt by economic and technological change. We have seen a weakening of labor movements in many countries through a combination of corruption and anti-labor policies.

At the same time, women’s movements are continuing to grow, even though (with the recent exception of Argentina) they have not always been able to stop moves to the right that threaten hard-won rights for greater equality and bodily autonomy. In many of these respects, we find parallels to the situation that confronted anarcho-syndicalists in Spain, and Mujeres Libres, in particular.

The Spanish economy of the 1930s was very unevenly developed and characterized by extreme levels of inequality. The election of the Popular Front government in 1936 both generated high expectations for change on the part of working people, but fueled the fears of landowners and industrialists about precisely such demands for change.

Meanwhile, international capital, frightened by strikes and talk of revolution, abandoned the legally-elected government and largely sided with Franco and his fascist forces. The ability of the government to develop and implement policies to benefit its working-class supporters was severely limited. In areas where left organizations were strong, particularly in Catalonia, around Madrid, and in Valencia, workers took over factories abandoned by their owners, collectivized many rural properties, and attempted to meet their needs through direct action.

In this context, Mujeres Libres advocated for the full and equal incorporation of women into the resistance, the revolutionary project, and the planning for the world they struggled to bring into being. As opposed to those who said that the time was not right for attention to women’s issues, and that they should wait “until the morrow of the revolution,” they insisted that the only way to win the war and to achieve its revolutionary goals was to engage women, to enable them to overcome their illiteracy and their subordinate status, and to participate fully in the society.

They did not—could not—rely on government to meet their needs, to offer literacy classes, or training and apprenticeship programs, or to provide for child-care. In the midst of full-scale civil war, they developed practices to create the world in which they wished to live. They demanded that their comrades acknowledge and respect their differences as women, and their specific concerns about sexuality, support for and planning for maternity and child-care, and broad-based education, even as they insisted on being treated as fully equal members of the libertarian community.

While their activities, and the revolutionary project in general, were brought to a halt by the victory of fascist forces in the spring of 1939, the revolutionary legacy continues. Activists who went into exile in southern France, in Mexico, or in Canada retained their commitments, joined local union organizations, and forged long-term political relationships with younger people in their adopted communities.

Their stories of struggle, disappointment, and triumphs still inspire.

Martha Ackelsberg is the author of Free Women of Spain: Mujeres Libres and the Struggle for the Emancipation of Women (AK Press), and of numerous articles and book chapters on women’s activism in Spain, the United States and Latin America. She lives in New York City and devotes her time to activism around issues of racial justice. 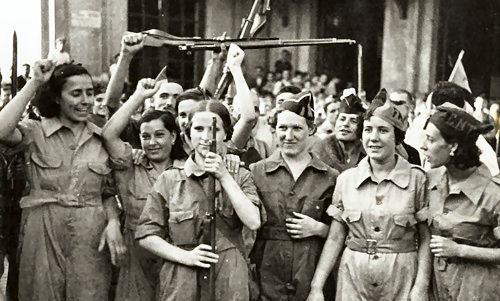