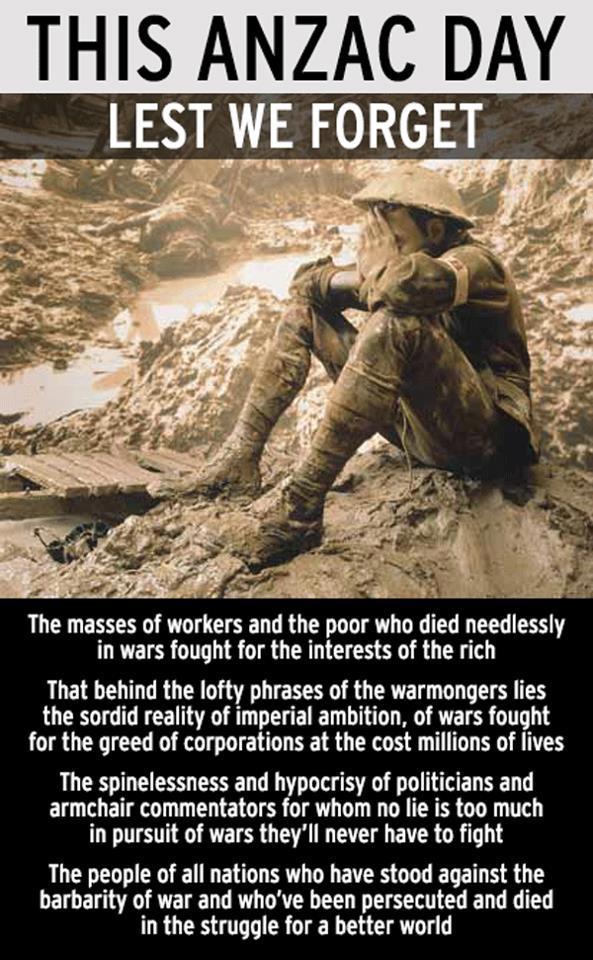 World War I was a crime against humanity, where two great imperial alliances clashed over their spheres of interest, fighting about territories, markets and resources. The Gallipoli landing was a failed venture for Britain and its dominions. On 25 April, British, Australian and other imperialist troops landed on a Turkish beach. The idea was to break through and take Istanbul, but they were bottled up by Turkish forces and, by the following January, sent packing. It was a waste of over 110,000 lives, a pointless massacre which was followed by more bloodshed when the Anzacs went to fight Germany on the Western Front.

The blood of the Anzacs, however, has been useful for some. Ever since WWI, Australian governments have made propaganda about the supposedly unique nobility of the Anzacs in order to sanctify the wars in which they fought. In recent years, they have even taken to claiming they fought for “freedom and democracy”, a lie that wouldn’t have washed at the time. Back then, soldiers were told they were fighting for “God, King and Empire”. They were honest about the King and Empire part, but even then, the idea that soldiers on both sides could be fighting for the same God was hard to explain.

Today, sentimental images of Anzac heroes are brought out every April in Australia, to build support for Australian imperialism and to foster militarism. With the old Diggers dead and gone (and therefore not in a position to speak inconvenient opinions like opposition to war), the eyes of Australian governments are on using the Anzacs to sanctify current and future wars. Don’t think about which country Australia is invading, or whether the war is justified and especially don’t think about how many brown people they are killing. Instead, just marvel at the heroism and sacrifice of anyone who will pick up a gun for Australian imperialism.

As long as the image of the Australian military can never be publicly impugned, it will never be possible to defeat an Australian government’s imperialist war. As John Howard showed with the Iraq War, a Prime Minister can defy public opinion in order to start the war and rely on militarism to undercut opposition after that. The working class, however, has no country. Neither the Anzacs of 1915 nor the Australian military of 2014 are “our troops”. We must reject nationalism and militarism and prevent Australian governments ever again sending young people out to kill and die for Australian imperialism.

SAY NO TO MILITARISM