Background of movement dynamics and insurgency

What role do anarchists play in this?

It’s for our own good

Despite contributing in a number of useful ways to the uprising last summer and the events that have played out in the year since, anarchists are in danger of being outsmarted by becoming creatures of habit. 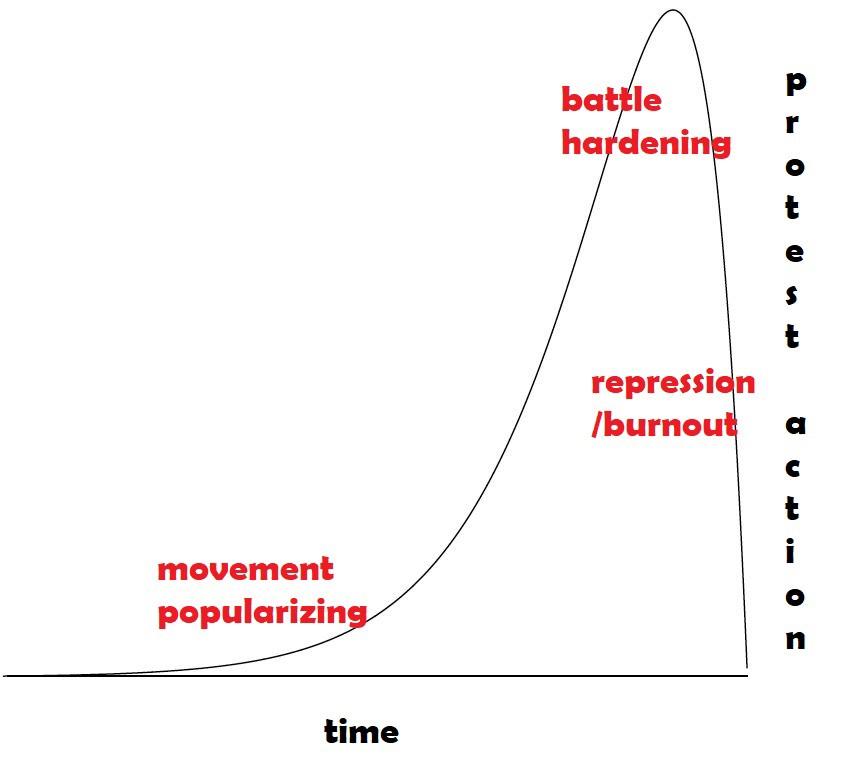 Crude rendition of a graph remembered from a DHS manual from a decade ago.

Background of movement dynamics and insurgency

Every movement, revolution, or war for freedom starts with a tension between two elements, popularization vs. “militantization.” The most powerful theoretical scenario in any movement would be if every single member in a society were engaged at their peak militant tactical capacity fighting on behalf of the same cause. However, the tension here is that the insurgent core of a movement has less and less influence the more popularized a movement becomes. While at the same time non-insurgent and internal counter-insurgent influences have more influence, ultimately leading it to increased pacification.

The police play an external counter-insurgent role by explicitly repressing the movement. In doing so, they may nip a movement in the bud so that it never reaches past singular isolated protests. But they also risk their repression backfiring, that people become so appalled with the police repression that they unintentionally accelerate the movement’s popularization. Depending on the culture of the society (how normalized police presence and violence is, how likely people are to come out in solidarity for something, how the media reports on protests), police have to balance this so that they are playing a repressive role but a repressive role that they hope will be overlooked.

Police tactics play another role in aiding the growth of movements. The more they play a repressive role, the more radicalized the people in the crowd become and the more likely they are to adopt militant strategies of protest, and may join the core of insurgents in the movement. This is called battle-hardening.

The insurgent core is the group of protesters who are militant and radicalized from past protests and their lived experiences from outside of protests. In their ideal scenario, the movement would popularize to 100% of its capacity and seamlessly 100% of those people would join the insurgency.

The police ideal strategy, once popularization has begun, is to isolate 100% of insurgents from the broader movement, forking them into two unrelated movements. This is counter-insurgency 101 that is taught to police and militaries all over the world. If this happens, the popularization will be short lived and ultimately impotent, and the insurgents will be ostracized from the larger movement and either made inactive or face arrest or other repression. If they accomplish this, it is over and nothing will be accomplished.

With every new movement this process is started off from scratch, with some people carrying over from one to the next especially in the insurgent core, but with generally an entirely new core of people who will either be influenced by the insurgency or not.

What role do anarchists play in this?

In recent years, anarchists have occupied a section of this continuing insurgent core that moves from one movement to the next. This has been simply because they keep participating in movements, and their ideals and tactics are accepting of militancy. However, they don’t solely occupy this insurgent core, and oftentimes might only make up a tiny fraction of it. Likewise, many anarchists don’t always play this role, and many don’t even participate in movements.

In recent years, as debates about violence and non-violence have proliferated so has the usage of “diversity of tactics.” It has become a euphemism to mean “…and militancy is okay too.” However, as anarchists we could stand to learn more from our own philosophy in these regards.

Class war (and oppressive power dynamics) operate in every conceivable venue of human life. That’s why diversity of tactics are good not just because militancy makes sense sometimes, but for practical reasons, a plurality of tactics should be employed. Because where they take the war we should go too. It also makes sense moralistically. It falls in line with believing in the autonomy of people, and in hoping to expand that autonomy we should accept the multitude of ways people try to. What’s the lesson

Why bring this up? Well if anarchists are at fault for anything, it is for going into the birth stages of a new movement and operating off the presumption that this new generation of people have already had enough time to learn about militancy, insurgency, and ultimately anarchism, and if they haven’t, that is too bad, they better hang on for the ride. There is an argument to be made that anarchists might have a greater capacity overall to helping produce insurgent movements if they embed with the movement early on, wearing normal clothing, not going as large groups of anarchists. The goal of this would be having conversations with people, developing non-anarchist connections, helping newly formed groups of friends, engaging in debates about values and tactics, spreading political education etc., and using this attempt at embedding to have a broader influence overall.

Anarchists already do this a fair bit, but these efforts are frequently overshadowed with a desire to self-identify with anarchism. Dressing in black for a black bloc, once a clever tactic for anonymity, has now produced the opposite effect, including in scenarios where there is no reason for there to be a black bloc or where there might just be a few singular people dressing in black in a sea of people not doing so, thereby making them more identifiable. This doesn’t make sense tactically from any justification of black bloc. And worst of all, behaviors like this may unintentionally play into the police’s counter-insurgent efforts. **The goal of the counter-insurgency is to separate the insurgents from everyone else*** , the goal of the insurgents is to bring everyone on board the insurgency. This doesn’t mean that values need to be compromised, it means we need to be clever about the ways we spread our ideas. We need to not allow ourselves to be isolated. We need to come up with new tactics and not allow us liking black blocs to turn us into one trick ponies. The beginning of a movement is a time to grow with new comrades, not to give reasons for everyone else to think we are from a different planet. While we aren’t responsible for the inane conspiracy theories that arose this last summer, standing out too strongly too early on certainly allowed us to become centers of some of those conspiracy theories.

Despite this tendency, anarchists have also played many useful supportive roles to helping new movements bud their insurgency. On the first nights of revolt last year people explained why they should put their phones down and not film their friends looting, in some places. Months later, this led to whole crowds eventually accepting they should not film crimes, period. Embedding in the crowd and proliferating cultures of resistance like that help movements, including their insurgent elements, grow in a sustainable way that resists oppression.

Embedding in this way is similar to the anarchist idea of “social insertion.”

“Social insertion is about engaging in social movements and their organizations as genuine participants.

Within these organizations, revolutionary anarchists should openly advocate for our positions, even when in the minority, to clearly articulate the perspective that we offer. Our ideas of direct action, horizontal organizing, class struggle, and anti-capitalism should be openly discussed in the social movements as important strategic elements of gaining power for the social movement.

Our revolutionary anarchist ideals will find traction in social movements through our influence as members of the social movement with a clear vision of a new world and with the organizing skill of long-term militants.”

The single most dangerous thing to an upcoming uprising in the US is the internal counter-insurgent elements. These are groups that may have some relationship, approval, or funding with city governments or police to maintain control and order within protests, or they do so voluntarily. They embed within protests, and their goal is to isolate and separate the radical elements from the non-radical. They employ legitimate politics that attract people to protests against white supremacy and police violence for ultimately reactionary goals that maintain these systems.

For any radicals, insurgents, or anarchists, the preeminent goal in any upcoming movement is to make sure these counter-insurgents are not successful. That means garnering more legitimacy than they have, not allowing ourselves to be isolated from everyone else (or isolating ourselves) because we already have more friends than they do on the ground, it means standing up and defending non-anarchists who engage in militant action when they are attacked by counter-insurgents, it means doing research to expose their relationships with police and city governments, it means not always having it obvious we are anarchists because of the clothes we wear.

These are the conversations we need to be having now, because the state has spent the past year building up a counter-insurgent infrastructure, and if they deploy it with our current tactics at hand, they might win.

We need to refocus our efforts into finding the organic insurgency that is newly growing within a movement and fostering, aiding, and protecting it, rather than accepting that we are already all the insurgency that any movement could need.

It’s for our own good

Lastly, I will add that this isolation has led some to accepting disillusionment with elements of the movement from last summer. When we don’t connect with those who join movements and are at their first protest for the first time, we accept that we will not learn and grow with them.

We are not “specialists” of riot/uprising/revolution, and we have a lot to learn to reach any sort of end-goal politics that there will be. We owe it to ourselves and to them to allow our entire philosophy to continue to be shaped by the events that we participate in.