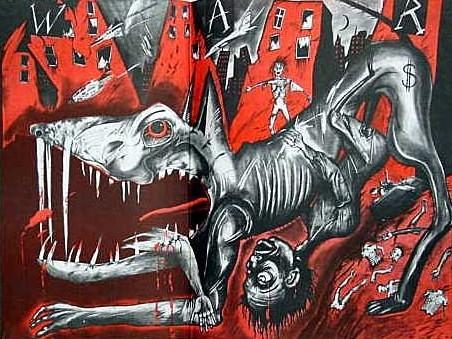 The economic and social situation in the countries of the Third World has in no way changed from the beginning of the eighties, in fact it has regressed frighteningly, accentuating the inequality between rich and poor countries more and more.

The situation is tragic from every point of view for the peoples living in these territories. This was brought up in a UN report (November 1987) that was drawn up concerning the world food situation, and in the latest annual report of the World Bank in Washington, where they speak of the “debts” contracted by these countries and their economic development.

From an examination of what is contained in these two reports — even though for obvious reasons they are very “contained” so as not to alarm world public opinion — one can get some idea of the dramatic level of the social and economic conditions that Third World populations are living in.

At the same time the progressive and humanitarian democrats of the opulent Western World are boasting on various fronts of the aid being given to these populations to fight famine. They promote vast campaigns of public opinion and solidarity which are in fact more useful to the States, parties, unions, Church and capital itself as they create social consensus by exploiting the disasters that have been brought about by the structure of dominion itself.

The extermination of entire populations continues in the Third World. This is not only due to the extension of the problem of hunger and the spreading of infectious diseases new and old — some, such as AIDS, deadly gifts from capitalism — but to the very aid sent by the Western countries, in reality a scientific way to assassinate them more quickly.

In fact any “aid” given is no more than a way to increase these countries’ dependency on the more powerful ones. The richer countries resupply the Third World with goods of primary necessity that are not sufficient for a correct alimentation given the different climatic conditions that these populations live in and that the food supplied contains a high fat content. The same goes for agriculture: what is promoted is based on indiscriminate deforestation which is leading to the irreversible process of desertising the planet, increasing the already torrid temperature and limiting the natural production of oxygen. An ecological disaster of immense proportions is already taking place in some areas of the African sub-continent.

It should be added that the plan for “progress” and development in these countries is nothing more than a model for the systematic destruction of every previous internal rural economy. This is aimed at installing an industrial process based exclusively on the production of death, carried out by multinationals such as Union Carbide, responsible for the death and maiming of thousands of people, and one of the greatest ecological disasters produced by capitalist industrialisation.

Moreover, while they are amassing huge profits due to the very low cost of labour and the indiscriminate looting of the raw materials which these countries contain, the opulent and advanced western capitalists are getting even richer, and are accelerating the process of impoverishment of these countries. These crimes are being carried out by capital daily, with the complicity of the various States, to the injury of these peoples all over the world.

This picture perfectly fits the logic of dominion that is at the basis of the modern cynical democratic conviction concerning progressive, humanitarian and “civilising” man.

This UN report, drawn up to tame world public opinion, cynically considers undernourished those people who manage to assimilate the minimum number of calories required in order not to die of starvation and to be able to move slightly. The statistical tables used in this report bring to mind those used in the Nazi concentration camps. In fact, such a report covers up the true conditions that exist in the poorest countries, as the number of people who die of hunger is far higher. If one started off by considering a greater number of calories to be necessary, enough to allow the development of any activity that requires even a very modest dispensation of energy, the figures would soar vertiginously. Above all, all the areas of the world are not examined: for example, Latin America is not even mentioned as well as some areas of Africa and Asia.

The World Bank report begins with a reference to the debt contracted by the Third World, increased by 6.25 per cent, which corresponds to the hyperbolic figure of 1.190 billion dollars, which could become 1.245 before the end of this year. All this is in spite of the fact that in 1987, for the fourth consecutive year, the countries that are poorest and most in debt have sent increasingly high sums of money to the creditor countries in payment of interest: more than they have received in new loans.

Here again the kind of “aid” given by the most industrialised countries to their poorer “brothers” emerges.

All the same, what worries the World Bank is not so much the abnormal in-crease in Third World debt, so much as its level of internal development which, as well as not having shown any improvement, has regressed in some cases. If this is the situation in which the poor nations are living in a period where the world economy is going full sail ahead — they ask — what will happen in a period of recession’? It is particularly on this point that the problem lies.

The World Bank director for international economy, Jean Baneth, points out that it would take only a simple moment of stasis in the process of economic development of various countries to bring about a fall into a state of poverty for wide sectors of the population. He adds “it is also potentially disruptive at the social and political level. It threatens the survival of many new and fragile democracies and, more widely, of regimes which favour cooperation rather than conflict”.

In simple terms what this means is that it would take only a period of crisis in the world economy to provoke a chain reaction within the countries involved, that could open up tensions and vast areas of social and political conflict. The extension of this would mean great difficulty for the institutions in controlling the situation: the result could be the overturning of the present capitalist order.

Their main preoccupation is therefore that of exorcising the spectre of “social disorder”, of a radicalisation of the class conflict within the countries that, once involved in such a situation, could make their world and their economic order based on the fragile equilibrium established by State terror, crumble down around them.

It is also in this sense that the proposal of the entry of the USSR into Western capital’s international organisations should be seen. In fact an improvement of relations between the two superpowers, not only in political but also economic, financial and commercial terms, would undoubtedly create conditions of major instability for the whole world economy, as well as that within the individual States. The support that the US government is giving to their entry into the International Monetary Fund is based exclusively on reciprocal economic and political interest, not the ideological questions that are talked about so much to deceive the unprepared.

Capitalism and Statism are two realities that are not instituted at planetary level. They differ only in their exterior forms and in the way they are applied in the various countries, but their substance is identical. In the West as in the East, for the proletarians of the whole world, these concepts will always mean exploitation and oppression. The imperialist wars of conquest between the two superpowers have been over for some time. They have already colonised the whole planet. Their present interest is to come to an agreement and cooperate at all levels to guarantee themselves a painless and ordered management of their dominion within their respective areas of influence having recourse to their smaller collaborators who, in exchange for services rendered, receive welcome compensation in political terms.

But just as there is a precise social hierarchy within States, there is also another between the State “extras”, which one knows, are always in the pay of the powerful, and are treated as such by their bosses. Basically the wellbeing that is shown off by the economically and technologically more advanced countries has come about and continues to come about through the oppression and exploitation of the proletariat internally, and through the impoverishment of the populations in the underdeveloped countries in the Course of development.

Further confirmation comes from the same World Bank report when it states that under the weight of the debt and the interest paid in the 80s, the middle range pro capita income in Latin America was reduced by a seventh and at least by a quarter in the poorest African countries. This is causing serious economic and social differences within them and an increase in tension between those countries that find themselves in the same situation.

In their report the experts are therefore trying to find palliatives to resolve some of these problems, without obviously facing them at the roots. The situation of the economic crisis in Mexico is illuminating for example. Inflation there has reached the level of 140 per cent. Well, among the proposals of the World Bank there is the recent one to cover a part of the Mexican debt with special US treasury bonds, and there is also that formulated in 1985 by the secretary of the American treasury Baker, who foresees new loans but excludes any moratorium on loans given in the past. It was the World Bank itself who recognised the inconsistency of both these proposals, in that, if these solutions had been applied they would only have had the effect of slowing up the degenerative process, reducing the foreseeable negative effects which would consequently bring heavy repercussions on the world economy.

Beyond the figures and statistics, from our point of view, the revolutionary one, it will take quite different and radical measures to solve these problems that seem enormous and insurmountable.

Even between the lines of the reports of all these “experts” we are able to read what their main worry is, i.e. to find a plan which will put a brake on all the thrusts of revolt that naturally animate the exploited in every part of the world. It is always the latter who pay the cost of the world social and economic “crisis” that exists in their own countries. That is why the “solutions” that revolutionaries all over the world must search for can only be those aimed at accelerating a process of social subversion for the destruction of capitalism and all States on a planetary scale. But this leads us to another discourse!