Title: We Are Calling To The Federation!
Subtitle: Declaration of the Revolutionary Anarchist Federation
Authors: Anarşist Gençlik, Devrimci Anarşist Faaliyet, Devrimci Anarşist Federasyon, Karala, Lise Anarşist Faaliyet, Meydan
Topics: kurdistan, organizing, revolutionary anarchism, struggle, Turkey
Date: 02.04.2021
Source: Retrieved on 02.04.2021 from anarsistfederasyon.org
Notes: Hello comrades! The revolutionary opposition in our land is under the attack of the who fills the seat of the Power but we don’t intimidate by these oppressions. We’re entering a new era, we’ll carry on with Revolutionary Anarchist Federation at this Era.
plain PDF A4 imposed PDF Letter imposed PDF EPUB (for mobile devices) Standalone HTML (printer-friendly) XeLaTeX source plain text source Source files with attachments View history Edit this text Add this text to the bookbuilder Select individual parts for the bookbuilder

We Are Calling To The Federation!
Declaration of the Revolutionary Anarchist Federation 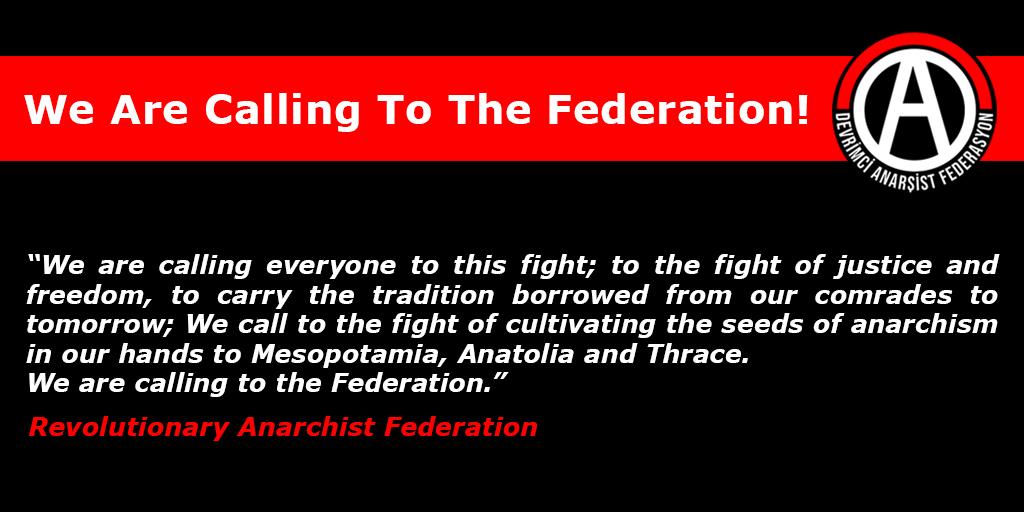 Anarchism is a two-hundred-year struggle for justice and freedom. Anarchism opposes the relations based on Power within the individual and society, the State the enemy of the peoples, capitalism that exploits the peoples. Its reality is based on a hundred-thousand-year-old world without states against the five-thousand-year-old world with states which is full of holes with riots. Anarchism will overthrow Power and create a life without Power for justice and freedom with the power of this reality.

We are the ones who have been weaving the revolutionary anarchist struggle for 12 years. We are the ones who say “Anarchism means organise”. We turned what we said into action. We are experiencing an anarchist organization step by step. Instead of selfishness and competitiveness imposed on every individual in the society, we grow solidarity and sharing. Instead of obedience, we organize rebellion. We save hope from anxiety, we walk on fear with courage.

We are in a fight against the state. State means injustice. We will destroy this injustice. We are Armenians, Kurdish, Laz… We are the majority, not the minority; We are the massacred peoples confronted with the state. We are workers, in a fight against bosses. And every worker’s fight is our fight. We are in a fight against male domination. We are women, against masculinity. We are the colors of the rainbow against the gray of male domination. We are the harmony of the tree with the stream, of the lion with the gazelle. We are in a fight against capitalism that sources ecological life. We are young people who resist all captivity for their freedom. We are those who fight with the power of our youth. We Revolutionary Anarchists are those who share solidarity street by street, neighborhood by neighborhood, we are the organizers of anarchism from seven years old to seventy years old. We organized the fight by separating them from subject to subject, without prioritizing the injustices. And our fight continues. Day by day, anarchism is getting organized in our geography. The relationships in different regions are expanding and getting stronger. Now we are faced with a reality that these 12 years have brought to us.

The relation between the organizations in Ankara and Istanbul have operated on the principle of solidarity with each other and cannot meet the needs of the growing struggle. We will experience similar situations in new regions tomorrow. Another similar one is the need to strengthen the ties of independent anarchist struggles. We need federative relationships to fulfill all these requirements and to widen the fight even further. Organized anarchism is our tradition and it shows us this with hundreds of federations it has created at geographies all over the world in its two-hundred-year history. Yes, the reality we are facing today is federation.