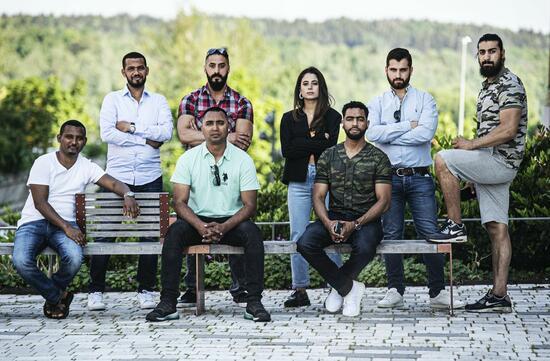 This article was originally published on the website of US labor magazine ASR on July 13, 2021. The warehouse connected to Zalando, which is run by Ingram Micro, is similar to the Amazon hell holes.

More than 100 workers at Europe’s leading online store for fashion and shoes, Zalando, have turned to the SAC, the Central Organization of Workers in Sweden, to battle the “new Swedish model,” which many workers describe as modern slavery. After workers demanded their own union agreement and safety representatives, management announced plans to fire several SAC members.

The super-supervised giant warehouse in Upplands-Bro employs a largely immigrant (many refugees) workforce, and has signed agreements with two business unions (Transport and Handels) affiliated to the LO federation. The two “unions” have little presence on the job, and do nothing to enforce the agreement or address health and safety concerns. Since most permanent workers belong to SAC, Handels representatives circulate leaflets telling workers to be obedient wage slaves: “No strike, says Handels! … If you go on strike, you can lose your job and the company can sue you.”

One worker told the newspaper she was tired of being treated like a machine, tired of seeing colleagues suffer from injuries at work, tired of workers who need the job to get a permanent residence permit being fired a few days before they are to become permanent employees. Zalando relies on four staffing agencies and Samhall (a company that exploits workers with disabilities) to keep a steady flow of temporary workers streaming through the warehouse.

Many workers have rebelled against these conditions, forming their own section (Zads) of Sweden’s fighting union, the SAC.

“I left Bangladesh for a better life but ended up in a company that treats its employees just as they do there,” Tushar Miaji told Expressen. He works in the packing department, where he is required to pack 92 packages per hour. “It’s not really possible. But we are whipped into doing so.” Managers have threatened to fire him for joining SAC, but he is determined to change conditions.

Ingram Micro insists that conditions are good, and that SAC is engaged in “brand burning” because it refuses to sign an agreement with the union, preferring to deal with LO.

Transport-LO representative Nina Broman Costa agrees. “We have a good collaboration with the company,” she said, pointing to an ongoing study of ergonomic chairs (an issue originally raised by SAC, for pregnant workers). SAC agrees that Transport and the company get along well. But such friendly relations have little to do with unionism, and do nothing to improve conditions on the job.