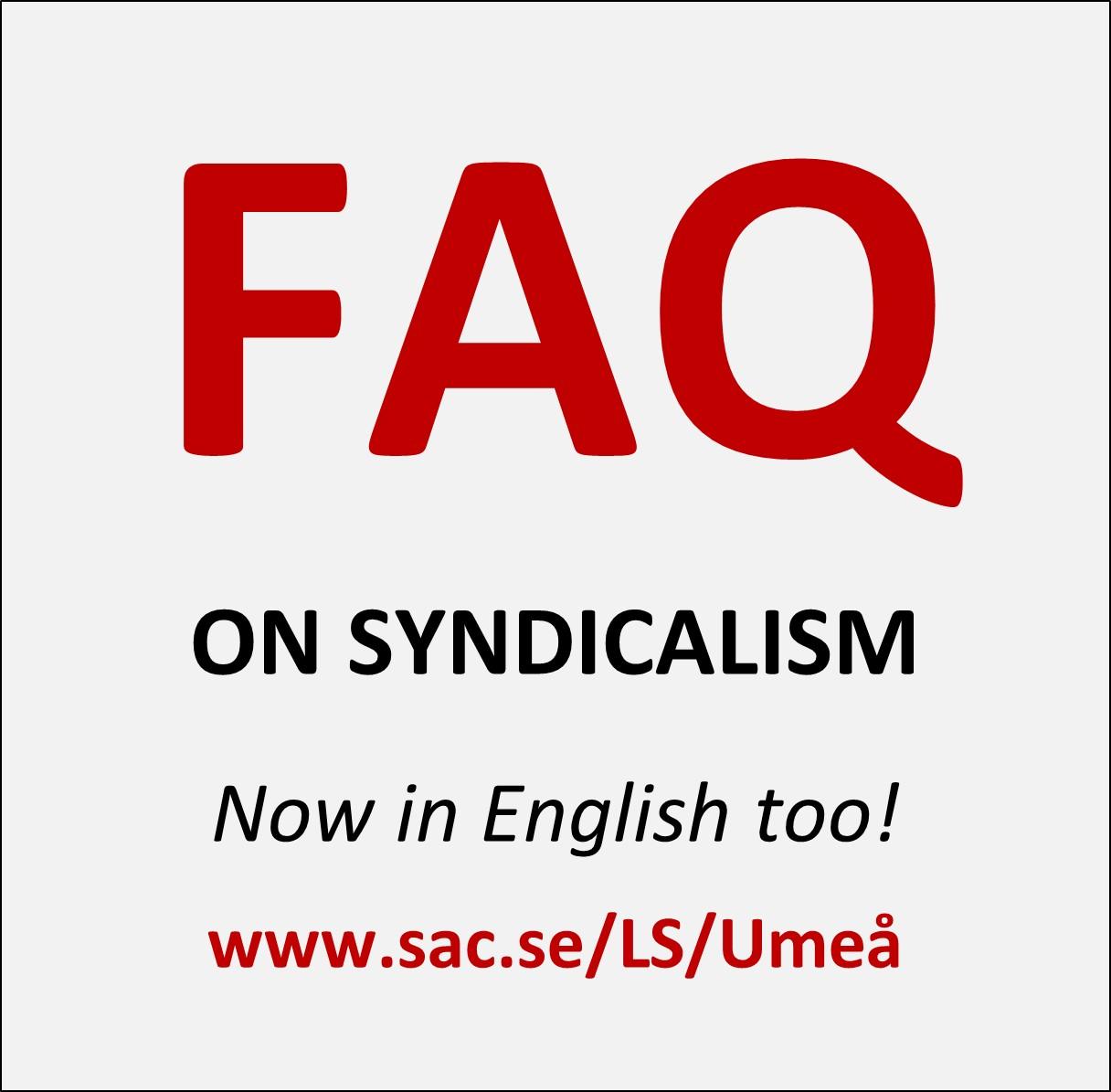 Based on the first part of the book Swedish syndicalism – An outline of its ideology and practice, written by Rasmus Hästbacka.

The whole FAQ can be found here.

More articles by the author in Anarchist Library here.

Below you can read the first and last question of the FAQ.

The purpose of syndicalism is to organize employees in all industries for immediate improvement of working conditions. In this book, the word employee refers to all wage earners except bosses. Syndicalist trade unions include both workers in the narrow sense (i.e. blue-collar workers) and white-collar workers. The syndicalist unions are based on member democracy, solidarity and independence from all religious and political organizations.

The democratic guiding star of syndicalism is that everyone who is affected by a decision should have the right to influence that decision. The long-term vision is to democratize the workplaces and thereby build an equal society. Within today’s trade unions, syndicalists practice what is known as base democracy and federalism. That is the basis for member-run trade unions. By building member-run unions, employees can develop the collective strength and competence to introduce staff-run workplaces in all industries.

In Sweden, syndicalism is represented primarily by the Central Organization of Workers in Sweden, which is abbreviated as SAC (Sveriges arbetares centralorganisation in Swedish). SAC was founded in 1910. SAC stands in sharp contrast with the dominant Swedish trade unions of LO, TCO and Saco. They are in their turn characterized by top-down government, centralism, tycoon rule and loyalty to the employer side. LO and to some extent TCO is also hampered by loyalty to the Social Democratic Party. TCO and even more so Saco are furthermore characterized by craft egoism.

The magnitude of syndicalist currents has always been significantly greater than the membership of SAC itself. Syndicalism means independent labour struggle. As soon as employees agree and unite against the management and act to increase their influence, one can speak of a syndicalist tendency. In that sense, syndicalism is simply common sense and a natural approach to organizing.

Syndicalist unions have a task of a dual nature. It can also be formulated as fulfilling a dual function in class struggle. We are here talking about class struggle in the short and long term.

In the short term, the struggle is about enforcing reforms or daily demands: better wages, reduced stress, shorter working hours, stronger employment protection, better working environment, an end to sexual harassment and racism, strengthened freedom of expression, protection of privacy, better work-life balance, etc. All union demands, conflicts and negotiations have a common purpose: that the workforce should seize more and more power over the workplace.

In the long run, syndicalist unions are tools for a complete democratization of workplaces. Everyone affected by decisions made, must also have the right to influence those decisions. This requires that the working population takes control of the means of production and establishes new administrative bodies. Those who do the work should manage the workplaces – in the interests of all members of society and within the framework of the ecosystem. SAC believes that the only legitimate management is the management that the workers have elected, that follows directives from the shop floor and that can be recalled immediately from below.

SAC uses the Swedish term driftsektion (in English: operating section) because the long-term vision is to take over and operate production. The base democracy and federalism that is practiced within the union today gives a clue as to how the economy can be managed in the future. The North American union IWW express this aspiration in the following way in the Preamble to its constitution: “By organizing industrially, we are forming the structure of the new society within the shell of the old.”

In short, syndicalism strives for economic democracy. We also use the expression workers’ self-management. As is well known, the word democracy means rule by people, and we believe that the people really should rule. Economic democracy is the core of SAC’s long-term vision, but the vision is bigger than this (read further in Part 4 of the book).

In today’s workplaces, economic dictatorship prevails, even if the political system is formally democratic. Employees are obliged to obey a class of bosses or owners which they have not voted for and furthermore do not have the right to control or recall. This is not a worthy situation for adult people. In addition, bosses and business owners enrich themselves on the working population.

The hierarchy in workplaces is a basis for class society as a whole. The individual workplace is a class society in miniature. The prevailing class society is a capitalist society. It is characterized by the fact that most of production is owned by private capitalists. The goal of capitalists is to maximize profits and their power (or at least to maintain their power). Production, the surrounding society and politics are subordinated to their goal of profit maximization.

The early labour movement described the dictatorship and exploitation in the workplace as wage slavery and employer rule. We syndicalists hold fast to this critique even though the wordings can be updated.

The dictatorship in the workplace is the central component of capitalism. Capitalism rests on the productive and creative activity of the working class. At the same time, it is our creative capacity that can bring forth a new social order. Economic democracy would make it possible to produce for human needs, instead of profit for the few. Economic democracy lays the foundation for an equal society, a classless society. That would mean a fundamental transformation of society.

Class struggle is an inevitable consequence of a boss and owner class having a monopoly on the means of production. The conflict between labour and capital cannot be abolished within the framework of capitalism. It is through the offensive struggles for daily demands that we approach the long-term vision. A future transformation of society is the ultimate consequence of class struggle.

A prerequisite for fulfilling the dual task is to put emphasis on self-organization and collective struggle. If a trade union is dominated by client service and defensive legalism, then it is important to make new investments in organizing. Client service was discussed above (see question 14).

Client service is in itself a trap if it becomes dominant. It could lead the union stepping into two additional traps. One trap is that the union representatives move up, above the workforce and are integrated with the employer side. The second trap is that organizers are marginalized. They then end up outside the workforce and lack influence. The solution is to work within the collective of employees and mobilize co-workers in struggle and bargaining. See the illustration of the two traps in Appendix 2 of the book.

A necessary prerequisite for fulfilling the dual task is to build strong local trade unions. But it is not enough to form sections, job branches and cross-union groups that are isolated from each other. The local organizations need to cooperate through a larger class organization. Part 2 of the book presents the idea of the class organization.