Videos From The Trash Dimension

Anarchist Film Doesn’t Exist
A zine based on the video zine of the same name. 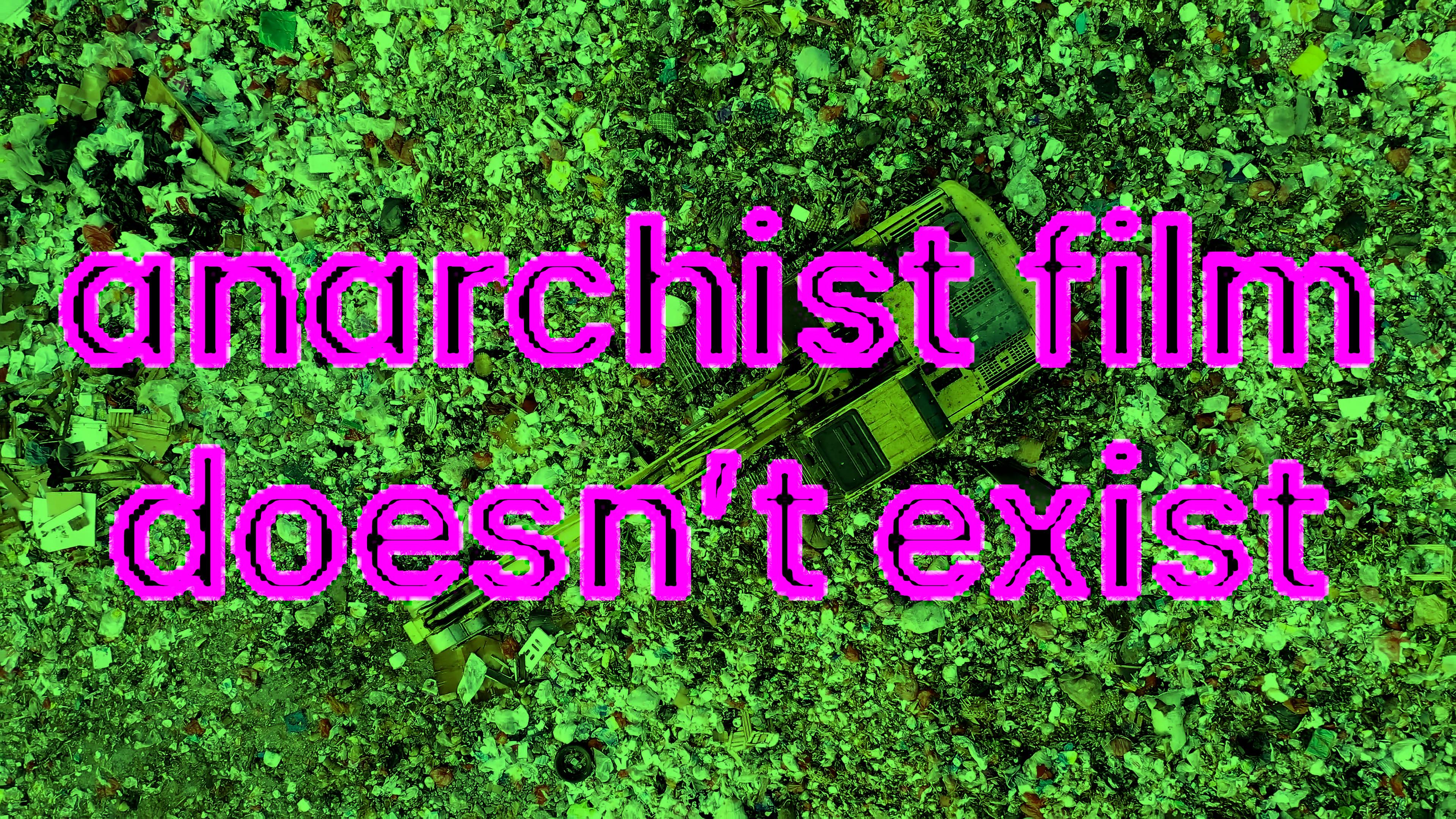 The popular anarchist attitude has dipped in and out of hostility towards DIY culture over the past 10 years and I think I understand. There’s this kind of Martha Stuart-y, Pinterest-y ass thing that goes on in DIY where instead of being a freeing experience, we end up with a new, more accessible market to buy and sell at. So accessibility is the aim there, and of course, I’m an anarchist, so you can guess that my feelings about accessibility are positive. But I think where DIY stops being interesting is when accessibility is the end goal. For me, instead, accessibility is just the method by which control and order is made impossible. If accessibility is total, there’s no more bargaining power to force people to work or obey law. When DIY aims to evade pay walls and legal obstacles, it becomes a criminal thing. This is the anarchist quality often missing from DIY, and more specifically, DIY film.

My friends and I sometimes put on screenings of “anarchist films” called Videos From The Trash Dimension. When we collect and screen anonymous videos made without directors or money (which I assume are often made by anarchists) we don’t just do it in order to make film more accessible. We do it to destroy the need for film in the lives of people who crave stories but hate industry.

I often put the phrase “anarchist film” in quotes for a few reasons. One of them being due to the word “film” which is a material I expect very few anarchists to purchase before trying to pass off what they are doing as “anarchist”. I put the A word in quotes because there’s like this feverish dissection of our identity as anarchist and it just exhausts me. For me, the anarchist person isn’t the thing, but rather the anarchist event. When we emphasize the identity, we end up with examples of like, anarchists making like 400,000$ films, hiring employees, negotiating their pay in accordance with the film set tradition of “above and bellow the line” organization, and still claiming that it’s an anarchist project. I’m not interested in the anarchist who makes Cinema or Film. I’m much more interested in the anarchist event. Stealing, scamming and sharing equipment, subverting the traditional on-set structure, refusing the aesthetic and practice of money, and even eventually, telling stories that only our unique approach to moral or social code would tell.

Hip hop and punk music famously incorporated this approach at one point or another. Pooling equipment, dealing with anti-social subject matter, utilizing crime in their technical process etc. In 1977 New York City had a blackout lasting an entire day. Grandmaster Caz and Disko Wiz have this great interview where they talk about their experience of the night and the period following the blackout. That everybody looted the fuck out of all the electronic stores and everything, snagging speakers and turntables and whatever else. Looters stole the DJ equipment they needed to start recording what they had only been doing with their friends on the street and almost immediately after, a style of hip hop that previously only existed in the Bronx, grew at an explosive rate through the larger world of hip hop. Disko Wiz in particular recalls that the Bronx went from having about 5 active DJs to one on every block, over night.

That film, or more accurately, video, hasn’t experienced this kind of assault, is a huge missed opportunity. The kinds of stories that hip hop and punk are able to tell when the accessibility knob is cranked up to 11, defies conventional social and moral code and begins to develop a mythology of life beyond law. A mythology, by the way, that has helped to enrich entire generations of anarchists.

The modern turtle island anarchist world is dominated by the idea of truth as the antidote to lies. Lies being a key threat to what is good to anarchists. There’s a kind of western moralization of objective scientific reality that weirdly shapes even the enemies of western moralization. So if you’re an anarchist of the western world, your visual and auditory media experience is crisp, straight-laced journalism and documentation of what objectively occurs. American anarchist media projects unanimously aim to spread proof of what occurs, documentaries, Infograph’s, report backs, articles, etc. This emphasis on debunking false stories reminds me of the historical first encounters that white people had with indigenous people, specifically their encounters with myth and legend. You read about those encounters and often find letters from these men saying like “these indigenous people believe all these untrue magical things and tell each other these non-factual stories about their world and how nature works, unlike us, civilized knowers of what truly occurs.” Of course a different kind of truth is being described in myth and generated when these stories are passed down and the demand that what is not scientific is classified as a lie, clearly works to stop this mythological truth telling.

I am not indigenous and I do not think that I want to pretend to identify with the myths and legends of who I’m not. What I am is an anarchist, people that are famous for having the least realistic, most impossible desires of any philosophical or strategic group. If any modern group of people are composed of the materials that build mythology and legend, it’s anarchists. While I don’t think her style is exactly my thing, I celebrate Margaret killjoy for example, as one of the very few modern anarchists working to construct anarchist myth. My dream for the future of anarchist video projects isn’t better documentaries or more accurate news stories. I dream of anarchist dreams. Our stories don’t have to be factual to describe what is true and in fact, as anonymous people who need not be located, it’s necessary that they are not.

I’m going to describe what I imagine anarchist video might look like, aesthetically, if it existed. Which of course, it doesn’t.

Anarchists don’t want to be identified. Without identity, performances by people recorded on a screen are sparse if they exist at all. A limb here or a shadow there is the most we get, but instead of recording what people are doing, we record evidence that they have done it, or even, what they might be looking at while they do it. So anarchist video is partially recognized by images of aftermaths and non-human processes. Empty rooms, a broken window, a can of spray paint left behind in the yard, the pile of clothes you burned after you did the thing, etc. The action that other kinds of moving images look directly at, instead happens just off camera or just before or after the image is captured. Interactions between two characters may be occurring in a park, but we’re looking at a tree branch just above their heads while they interact off camera.

Also, without traditional performances, dialogue isn’t often spoken on camera. In fact, the anarchist video makers (who don’t exist) don’t even want the sound of their voices recorded. Instead, the images are usually accompanied by subtitles where dialogue is written out, usually with no accompanying recorded voices.

While other forms of motion picture have a director to own and enforce a focus on the central themes and ideas of a film, anarchists don’t like being or having a boss, so the director isn’t a part of the process. Because of this, an anarchist video is contradictory and conceptually chaotic when made by multiple people. When made by a single individual, anarchist videos sometimes feel like confessions, fictional communiques whispered in your ear. Something that individual would never say out loud to another person without the veil of storytelling.

Speaking of ownership, anarchists don’t take ownership seriously as a concept so anarchist videos often feature stolen work by other storytellers. Intellectual property theft would be an aesthetic feature in the genre. To add insult to injury, the anarchist video makers would often take these stolen images and change the order they appear in or the dialogue featured in them, in order to make them mean or say something antithetical to the original video, then integrate their new form into the rest of the piece as if it had always been intended that way. The video maker would rarely credit the original artist as anarchist videos almost never have credits.

Often you might witness an anarchist video and then later, see the same one again, only the makers have changed something and re-released it with the change or addition. The piece has no fixed point or conclusion to come to, so anarchist video participants come to expect this habit.

Anarchist video would often not make the person who witnessed it feel satisfied. Things occur or are described in these videos and when it’s over, you often come away feeling an itch, like you need to respond with your own video or that the piece you saw was a work in progress. In these ways anarchist videos never really wrap up, but instead tend to instigate a response.

All of these things, I imagine, would be true of anarchist video if it existed. However it definitely doesn’t, so they are not. It’s just a story.