Let Us Be Just
(An Open Letter to Liebknecht) 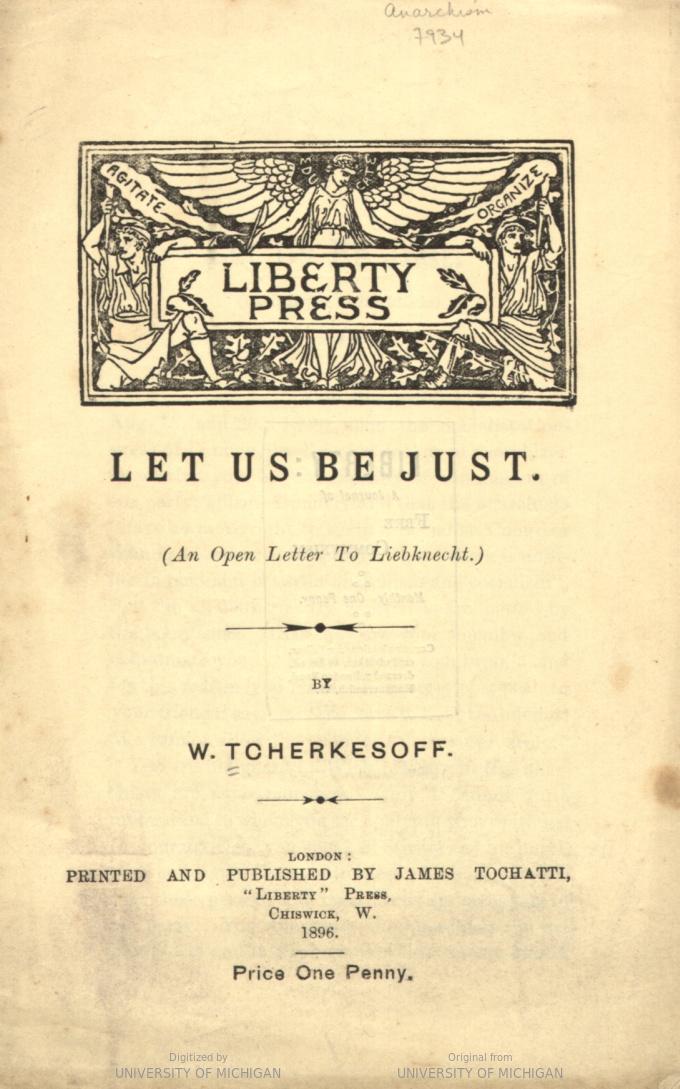 Your two articles (“Justice,” Aug. 15. and 29., 1896) upon the Socialist Congress of London, dwell a good deal upon anarchists. Of all that you, in your capacity of connoisseur of our party, affirm, I understand that the anarchists “have no more right to sit in a Socialist Congress than the Czar or Rothschild,” that “there is nothing in common between anarchism and socialism,” that “in all countries the anarchists are petted by the bourgeoisie,” that they are your enemies and calumniate you, “throw mud at your head”... and for this reason you make an emergetic appeal to your friends, saying, “We have to fight the enemy! We cannot allow the enemies to enter our army.”

You are indignant!… With reason, if the anarchists are such monsters. Only I cannot quite understand to whom you are applying your epithets. In your articles, you speak of Stirner and his pupil, your colleague, Eugene Richter. I assure you, sir, that these persons and their works are strangers to our party. You who know the anarchists “in the Old World and in the New World,” can you inform the public what fraction of anarchy is represented by your colleague Richter in Parliament? Since when have anarchists adopted the stingy tactic of parliamentary legislation? And, then, could you inform me for what anarchist paper your “colleague” wrote? At what international congress he presented himself as an anarchist delegate? Above all, sir, I should be much obliged to you if you would inform me of the names of some of the works of Stirner and his pupil, your colleague Richter, in which they developed autonomous and revolutionary communism, that is to say, anarchy?

You indicate nothing thus. “Stirner — Individualist,” and Richter, “chief of the Socialist-killers,” are mentioned by you solely for the purpose of demonstrating to your friends that the anarchists are not socialists. Perhaps, for your friends, this seems clear, but I am afraid, sir, that men of sense will find your arguments slightly illogical. Following your method of argument, I should have the right to say: “Liebknecht, and the Social-Democrats are always at war with the anarchists; from another quarter, these latter are persecuted by Crispi and other governments — ‘ergo’ Liebknecht and Crispi, the government oppressors, and social-democracy are the same party.”—This is monstrous! you say.

Yes, monstrous, but not more so than your own course of reasoning. I do but imitate it.

You know, sir, that the Convention against which Babeuf, Buonarotti, and the “Egaux” conspired, proclaimed all sorts of “libertés politiques,” and that national edifices bore the device “Liberty, Equality, Fraternity.” But the people remained in the same state of misery. What was the cause of it? asked honest men. “The cause” said Buonarotti, “is to be found in the inequality of fortunes… in individual proprietorship”… It was to obtain economic equality that the ‘Egaux’ conspired against the Convention.

“There is no liberty” — let us read the proclamation of Blanqui, in 1848 — for him who is in want of bread!

“There is no equality when opulence parades itself side by side with misery!

“There is no fraternity when the starving woman of the people drags herself along with her children to the doors of the rich!

“The tyranny of capital is more merciless than that of the sword, and the censer; it must be rushed.

“Let us have no more empty formulas!

“The economic emancipation of the working classes is the principal aim to which all political action should be subordinated” — adopted by the first International Congress, in 1866.

You see, sir, that economic equality, economic emancipation, the “crushing” of the “tyranny of capital,” are the base of socialist claims; that political rights without economic equality are “empty formulas” for revolutionary socialists. And you, as supreme head of “scientific” socialism, how did you formulate your claims?

What do we ask for?

Absolute liberty of the press, absolute liberty of religion, universal suffrage for all representative bodies and in the Commune; national education, all schools open to all, the same opportunities of learning and education for all, abolition of standing armies and creation of national militia, so that every citizen is a soldier and every soldier a citizen: an international court of arbitration between different States, equal rights for men and women, measures for the protection of the working classes (limitatiron of hours of work, sanitary regulations, etc.)

These are reforms already brought about, or in course of being realized in advanced countries; and they are in complete accordance with democracy.

All these freedoms, or abolitions, are magnificent and it is not we, the anarchists, who are against them. It is precisely in order to guarantee to humanity all the joys of liberty that we wish to destroy what is so dear to you — the State. But in your claims one does not find a word about “economic equality” and “economic emancipation” proclaimed by the Socialists. So that your formula repeats that of the Convention qualified by the Socialists as “empty formulas.”

What about the Anarchists?

While your extremely loyal friends, Will Thorne and Dr. Aveling, were applying themselves to the task of thrusting the anarchists from the doors of the Congress with the help of the agents of the police, the anarchists were holding their conferences and drew up, among others, the following declaration:

The Anti-parliamentarian and Anarchist Conference, considering that the subjection of the working classes to the ruling classes is based on the exploitation and economic submission of the workers, and that this economic exploitation is the source of all evil, and of political, moral, and intellectual oppression, declares that the principal aim of the working class movement should be economic and social emancipation, and that all political action should be subordinated to it.

Considering that legal and parliamentary tactics are not the only forms of political action, the Conference declares itself against all attempts at reduction of the socialist movement into a merely electoral and legal movement, which can only create division among the workers.

Considering, moreover, that it was by revolutionary struggle that the people have, in all times, gained any amelioration of their social and economic conditions, the Conference declares for revolutionary political action against the State, which is the incarnation of all injustice, economic, political, and social.

As an honest man, you will admit that, in this resolution, anarchists repeated the claims of Babeuf, Blanqui, and the “International.” They have but extended the claims of these brave predecessors. That being so, why do you, who know them so well, declare that the anarchists are enemies of socialism? I am very desirous to know your reasons.

I am no less desirous to learn from you, who, among the well-known anarchists, calumniated your party, your friends, or yourself?

Was it Bakunin, with whom you had an affair of honour? In your articles, you merely name E. Richter, who is just as much of an Anarchist as Crispi is of a social-democrat. Let us look into your affair with Bakunin. Perhaps it was he who calumniated you.

In the ‘Memoire’, presented by the ‘Fédération Jurassienne’ of the International Association of Workers, we read:

We cannot pass over in silence, apropos of the Congress of Bale (1869), a personal incident of great importance. Bakunin had learnt that Liebknecht, while speaking of him, had represented him as a spy of the Russian Government….The jury was composed of ten members....Paepe, Palix, Sentinon, Fritz Robert, Moritz Hess, Eccarius, and others. The jury declared unanimously that Liebknecht had acted ill in repeating infamous “calumnies.” Liebknecht, taking Bakunin by the hand, declared that he looked on him as an honest man, and a good revolutionist. “I have been deceived myself with regard to you” said he, “I have helped to spread calumniating accusations and I owe you reparation.”(P.84)

As reparation, Liebknecht engaged himself to publish in his paper an article of rectification. “Bakunin,” continues the Memoire, “gave him the article with his own hands. What did Liebknecht do? He never published it.”

You say, that the anarchists calumniate the social-democrats, “throwing mud at their heads,” then one must suppose that in 1869, Liebknecht, the anarchist, calumniated Bakunin, the social democrat! You are an honest and impartial man; do then explain to me this flagrant contradiction.

What! don’t you know that the prisons and convict settlements of Italy, France, Spain, Portugal are full of anarchists? That even in England, and in the United States, there are anarchists condemned to hard labor. And in Germany, where a stupid reaction pursues you and your friends, was it not there that the anarchists, Landauer, Dr. Gumploviez, Grunan and others submitted to 18 months’ imprisonment? Take no matter whom among my anarchist friends, and you will see that they have, everyone, been “petted” in prisons, during transportation and exile — Cipriani 16 years, Louise Michel 14 years, Borda 5 years, Kropotkin 5 years, Martin 5 years, Merlino, Malato, Faure, Grave, Pouget, Reclus, Malatesta, Nicoll, — all, absolutely all of them, have been submitted to long years of imprisonment, transportation, exile… And that is what you call being “petted!”

Perhaps you were not aware of this? Let us assume so. But you knew perfectly well that, during the last twenty years, capital punishment for political offences in civilised countries, has been applied only to anarchists. You knew of the execution of Reinsdorf and Caserio, for, whether at your personal instigation or not, your paper excited against them the hatred of the government and of the bourgeoisie.

You were perfectly well aware of the executions of Parson, Spies, and other Chicago anarchists, of Vaillant, Pallas, Henry.…

You know perfectly well that it is the anarchist party which is persecuted, martyrised.…

And you could set it down in black and white that the anarchists are “petted” by the bourgeoisie? — Let all honest men, let the brave German workmen in whose name you love to speak, now judge of these literary proceedings of yours.