What Are Collaborators? What Is Recuperation?

We Push For Peace

What Are Collaborators? What Is Recuperation?

The state has two complementary strategies for defeating rebellious movements such as the George Floyd Uprising and the subsequent surge of explicitly abolitionist organizing. One strategy, well known to most, is repression. The faces of repression are usually those clearly identified as our enemies: police, prosecutors, prison guards, judges. Surveillance, criminal charges, incarceration, and suppression of dissent through police violence are tools of the state that rebels and revolutionaries are continually working to defeat and overcome through our own organizing, innovative tactics, and the power of solidarity.

Less will known and analyzed is the other strategy for defeating rebellious movements: recuperation. Especially here in the Twin Cities, where public sentiment overwhelmingly cheered the destruction of the MPD Third Precinct and where city and police leaders abandoned killer cop Derek Chauvin at his murder trial, recuperation is doing a lot of heavy lifting for those who wish to keep business as usual.

One of the most important means of recuperation is the use of collaborators: people, organizations, or institutions who at first glance may seem to be sympathetic, or at least neutral, to the interests of liberation and rebellion, but whose ultimate loyalty is with the same forces that employ repression (whether stated or not). Here in Minneapolis, law enforcement with the aid of the mayor and city council have made extensive use of collaborators in their recuperation strategy.

- As abolitionists called for alternatives to policing, politicians took up the challenge by pouring money and resources into non-police groups that still work with the police and serve the police’s purposes. - As police reform campaigns drew attention to the fact that over ninety percent of MPD officers live outside the city, business and law enforcement interests hurried to prop up collaborator groups whose leadership and members do usually live in Minneapolis. - As racial justice advocates have gained enough traction that even nakedly anti-Black, exploitative corporations now regularly use phrases like “Black Lives Matter” or “Say Their Names,” the elites have turned especially to Black collaborators (many of whom now have the opportunity to work with the blessing of powerful government institutions for the first time). This is a divide and conquer tactic against multiracial rebellious movements less likely to fight back against a black or brown nonprofit worker in a t-shirt than against a white cop in a riot suit.

Detailed inside this pamphlet are some of the most visible collaborators carrying out the state’s strategy of recuperation against abolitionists, rebels, and revolutionaries, one year since the Minneapolis Uprising.

Originally formed in the wake of the George Floyd Uprising as the result of a call from the NAACP to protect Northside businesses, the “Freedom Fighters” are an organization of mostly Black men usually wearing black or white branded shirts with yellow patches and bulletproof vests. They frequently carry AR-15 rifles (but will not when contracted by city government/law enforcement). They describe themselves as “an elite security unit dedicated to protect the citizens and businesses of the Minneapolis urban areas.”

They have loudly confronted and physically assaulted people at anti-police protests who do not adhere to their idea of “peaceful protest” (for example, who hold umbrellas or cut a fence). At protests in front of the Brooklyn Center Police Department, numerous people reported being targets of misogynist vitriol from Minnesota Freedom Fighters members.

The group proudly and openly collaborates with the Minneapolis Police Department and other law enforcement. Sasha Cotton, director of the city of Minneapolis Office of Violence Prevention*, noted in an interview with the New York Post that MFF is in regular contact with police precinct commanders and meets with the chief of police.

The Office of Violence Prevention is a city government department created in 2018 after campaigns to divert money from police to other programs grew in the wake of the MPD murder of Jamar Clark and community occupation of the MPD Fourth Precinct. The name of the department is a misnomer because while it funds programs it believes will help prevent interpersonal violence and violence from those with little power directed toward those with much power (for example, looting), it does not seek to address structural violence (like evictions) nor violence from those with much power directed toward those with little power (such as police killings or mass incarceration).

Created by the city’s “Office of Violence Prevention” in the wake of the 2020 Uprising. After an initial stint, they ceased operations in late 2020 but are re-mobilizing as of June 2021.

Wearing distinctive bright orange t-shirts with their logo, the “violence interruptors” were supposedly tasked with patrolling streets to de-escalate any street-level conflict they happened to come across. While this might be worthwhile it if did not replicate modes of policing, they actually spent much of their time in support of MPD during anti-police protests, most notably telling people to go home and then directing a crowd into a mass arrest situation at a protest outside the Fifth Precinct the night killer cop Derek Chauvin was released from jail pending trial. They have never been seen attempting to “interrupt” police violence.

The program was ended last winter, but is being resurrected in 2021 with fifteen employees in seven teams, according to an interview on Minnesota Public Radio. They and their partner groups may also utilize volunteers. Multiple organizations receiving “Office of Violence Prevention” funding may be using the “MinneapolUS” branding.

Agape (a.k.a. “The Agape Movement Co.”) is a Christian-oriented nonprofit incorporated in the summer of 2020 shortly after the Minneapolis Uprising. Their self-described mission is “to bridge the gap between the community and law enforcement.” They say they aim to be a “reliable resource of housing, food, mental health, education & advocacy programs”; however, their most visible activities have been providing security for private business and recuperation of Black liberation struggles into reformist, capitalist, and pro-police activities. They often wear simple black t-shirts that say “AGAPE MOVEMENT,” but also often stay in plainclothes.

Agape members were paid $40/hour, according to a signed contract obtained by Sahan Journal and others, to assist the Minneapolis Public Works department in their demolition of George Gloyd Square on 3 June 2021. (The total contract pays Agape up to $359,000 for “revitalizing 38th and Chicago”—a euphemism for suppressing rebellion in favor of prioritizing business and police interests.) As one witness wrote, “Many of the members of Agape were on the frontlines [during the May 2020 rebellion], and to see those who moved dumpsters and blocked the streets just one year later threatening and issuing slurs at those who came [on June 3] with the notion to defend the Square leaves a gaping hole in our heart.” Indeed, Agape members previously thought by many to be allies instead directed virulent homophobic, transphobic, and misogynist remarks at community members, and instigated physical altercations, against those rebuilding barricades at the square and otherwise opposing their agenda.

Many of Agape’s members are drawn from communities and affiliations which have faced intense state repression, which allows them to be more easily co-opted by law enforcement and city government to serve their needs. Their co-founders are Alfonzo Williams, Marquis Bowie, and Steve Floyd. Agape’s website notes that Williams is an ex-gang member and heavily involved in World Wide Outreach for Christ at the corner of 38th and Chicago, a Black church with conservative tendencies. Steve Floyd has “served as a gang outreach worker for 33 years” and has worked for the Hennepin County Attorney’s Office, according to his biography on the site.

A “grassroots organization of African-American Mothers and Fathers” with a religious orientation. Usually seen wearing pink and black t-shirts; has also been seen wearing city of Minneapolis badges around their necks. Among other programs, works in partnership with law enforcement. Leader Lisa Clemons is a former MPD officer who supports more police, often in belligerent social media posts. Was paid to support police during the Derek Chauvin trial and Brooklyn Center protests and is present at police killings to advance a pro-police narrative.

Twenty-plus year old orgnization founded to combat gangs and illegal drugs, with a wide variety of activities including collaborating with various police agencies. Mostly operate in Minneapolis but also in surrounding cities “at the request of law enforcement.” Frequently rides bus and light rail lines and supports Matro Transit Police. Have recently been seen at racial justice and anti-police protests encouraging people to go home or to obey police orders. Often wear green t-shirts or reflective vests and black caps with their logo.

We Push For Peace

Nonprofit organization with a variety of programs including working with Minneapolis Police and Hennepin County Sheriff. Members often wear blue, white, or red hoodies or polos with the group’s logo. Was paid to support police during the Derek Chauvin trial and Brooklyn Center protests. Recently have begun performing security functions for businesses, such as the Cub Foods on Broadway Avenue in north Minneapolis. Members were also present at a recent city-paid de facto press conference by mayor Jacob Frey advocating for more police. Cortporate media frequently turns to them for pro-police quotes from community members of color.

Other organizations which have received government funding for their recuperative work in 2021 include: Center for Multicultural Mediation; Native American Community Development Institute, Corcoran Neighborhood Organization which has partnered with T.O.U.C.H. (Teaching Our Urban Community Hope) Outreach, C.E.O. (Change Equals Opportunity), New Salem Missionary Baptist Church, and Restoration, Inc. This is by no means an exhaustive list.

Activists acting in their individual (often celebrity) capacities also serve as collaborators when they knowingly or unknowingly support the state’s efforts to recuperate the status quo. Such collaborators can often be identified when many of the following behaviors are seen in tandem: talking to police, hoarding the megaphone, discouraging confrontational action, trusting official sources, “peace policing,” and valuing property over people. 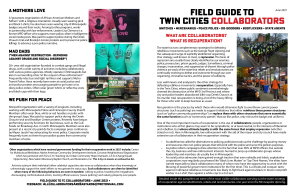