The Communiques of Wild Reaction

“The people who are pushing all this garbage of development and technological progress should be severely punished.”

After a little more than three years of criminal-terrorist activity, the group “Individualists Tending toward the Wild” (ITS), begins a new phase in this open war against the Technoindustrial System, which we explain below:

First of all, we want to explain that during all of 2012 and 2013, various groups of a terrorist and sabotage stripe were uniting themselves with the group ITS, so that now, after a long silence and for purely strategic reasons, we publicly claim:

Likewise, during this year, 2014, two more terroristic groups have united with us who have put the development of the Technoindustrial System in their sights, we refer to:

All of these have now fused with the ITS groups in Morelos, Mexico City, Guanajuato, Hidalgo, Coahuila and Veracruz.

Due to this union, the extravagant and little-practical pseudonym of “Individualists Tending toward the Wild” (ITS) ceases to exist, and from now on the attacks against technology and civilization will be signed with the new name of “Wild Reaction” (RS).

RS will take the initiative of attacking human targets as it was with ITS, but we will also charge against public and private property. The research centers will be burned along with their scientists, the businesses that promote artificiality along with their employees and executives will suffer attacks; in sum, everything that involves civilization, technology and progress will be fiercely attacked.

And if for that reason, during an attack, some citizen is wounded or killed, we won’t care, we will be indifferent and indiscriminating. The population, the mass, the people, the community, the sheep, the society does not merit our consideration, neither warnings, nor calls to attention, nor anything at all, because they are all part of the system; let it be clear, if they cross our path they are going to regret it… and we already showed this in the past with ITS. [2]

“Anything based on the masses, the herd, carries in itself the seeds of slavery. This crowd, which does not self-determine its values, is incapable of defining its own life.”

The groups that form RS will have their own names, this is just for inter-group decision.

These groups will enjoy autonomy, will be able to carry out acts of sabotage as well as terrorist ones, (if they want to), when they want, breaking with the “formalities of attack” and predestined group dates. That is, in any moment and any place, the latent threat of aggression will be present.

We deny being followers of Ted Kaczynski [3]; we have indeed learned many things from reading Industrial Society and Its Future, the texts after this and the letters before this text signed by “Freedom Club” (FC), but that does not mean that we are his followers. In fact our position clashes with Kaczynski’s, FC’s, his disciple Último Reducto and others, since we do not consider ourselves revolutionaries, we do not want to form an “anti-technological movement” that encourages the “total overthrow of the system,” we do not see it as viable, we do no want victory, we do not pretend to win or lose, this is an individual fight against the mega-machine; we don’t care about getting something positive from this, since we are simply guided by our instincts of defense and survival.

We are for the rejection of artificiality and of modern reality. We deny the values of the system such as “equality,” “promiscuous solidarity,” “peace,” “progress,” “plurality,” “humanism,” etc.

We defend our identity as “modern” humans clinging to our primitive past.

We cast our labels like “anti-civilization,” “primitivist,” “anarchist,” “anti-technology,” “luddite,” because RS is a unique tendency that does not need these tired and twisted labels for defining ourselves.

Thus neither Kaczynski, Último Reducto, Zerzan, Derrick Jensen, or any other with the (supposed) “primitivist” stamp represents RS.

Nor do the Informal Anarchist Federation (FAI), the Conspiracy of Cells of Fire (CCF), Feral Faun, or any other with the “eco-anarchist” or “anti-civilization cell of…” stamp.

RS and its groups only represent themselves.

Previously some (but not all) of the groups that have united as RS were exclusively formed by “eco-anarchists” and “radical ecologists,” now RS is formed by nihilist saboteurs, incendiary nomads, individualist delinquents, terrorist anarchists, politically and morally incorrect critics, that is, RS is a group of affinities who are ready for everything that is necessary, for achieving what we want… and what we want is the destabilization of the system, the direct punishment of those immediately responsible for the subjugation of wild nature (including human nature).

We are a considerable group of wild ones who are conscious that our ancestors were warriors and we vindicate ourselves in the same way. We are the minority of the minority, we have decided to undertake a war against everything that is taking away our essence as natural humans, and is fixing us to turn us into humiliated humanoids.

This essence that we cling to has been transmitted to us by our wild ancestors, it pushes us to follow the path of confrontation and resistance, against alienation, against what wants to domesticate us and keep us alienated from our true home: the forests, the deserts, the hills, the mountains, the jungles, the coasts.

The Technoindustrial System and its unimpeded advance snatched from us the way of living free that our great-great-grandfathers enjoyed; civilization with its agriculture and its sedentarism covered the environment in gray and deprived us of memory; modernity stunned our primitive instincts and senses; the animals we hunted died from the plague of technology; the places where wandered and rested were devastated by infrastructure and overpopulation; progress sunk us in ignorance; natural wisdom was lost in the passing of generations.

Day by day we drive ourselves to extinction, we are at the edge of the abyss, since we do not intend to adapt ourselves to the system nor to its submissive society, nor to its moral values.

But we have awoken! That primitive essence continues with us, it is not domesticated, it feels uncomfortable in the cities and it whispers constantly to us: “You do not belong here, destroy your cage.”

This is why during these years we have intensified the conflict against artificiality, this is why we have burned machines, set off explosives, created terror, torn living flesh, punctured heads, just as the ancients did in the wars against civilization, in defense of their way of life; that way of life still exists though it may be very minimal, and we will defend it to the end.

For those who think that the war against civilized ended with the extermination of the ethnic groups, hunter-gatherer nomads, original people of these lands in the war of the wild ones (chichimeca), after more than 400 years, allow us to tell you that you thought wrong.

We are the warrior legacy!

Those who sustain this dirty system will not live peacefully… 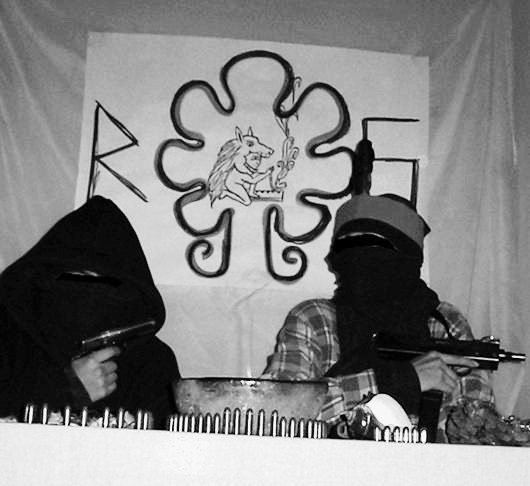 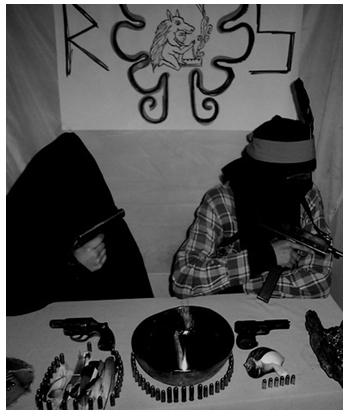 For those who may think that the individuals from the photograph are “our leaders,” let us say this is a lie. RS does NOT have leaders or a fixed and absolute leader, we are NOT an army or Marxist guerrilla group, RS is composed of groups of individuals responsible for our own actions, who act according to their possibilities.

The photograph was a proposal from one of the groups, to show its individual capacity to inflict damage by means of firearms, and to visually express the extreme defense of wild nature. While the image is full of symbolism and meanings, we only explain one: The feather in the hat of one of them represents that they have taken a life, this subject is sitting under the letter “s,” the first letter of the name Salinas, of Ernesto Méndez Salinas, the biotechnologist assassinated in Cuernavaca in 2011, the first mortal victim of ITS.

Enemies, observe well! This is not a game, it is not a joke, it is real!

We have the weapons, the explosives and the warrior legacy in our blood, we are coming for you!

[1] To avoid our tendency falling into confusion or mutation, falsification or alteration, for the phrases published in our communiques we have decided to put at the end of each one only the first letter of the author’s name. With these, if you recognize their works, know that we include them because we agree only with this phrase, but not with all of their thought or opinion.

[2] On April 19, 2011, the maintenance worker of the Polytechnic University of Mexico Valley (UPVM), Alberto Álvarez, opened a package-bomb that was addressed to the head of the Nanotechnology degree, Camacho Olguín; for his carelessness he ended up with hearing trauma, burns on his hands, and an amputated eye. Later, in February 21, 2013, the employee in charge of maintaining the mailboxes of the Mexican Postal Service, José Luis García, decided to steal a package that caught his attention, which he did not know was a package containing an explosive with a concrete addressee (who we will not speak of), again, on opening the package, for his carelessness and deliberate behavior, the employee ended up with hearing trauma, first- and second-degree burns on his legs, arms, face and the fracture of one of his hands.

[3] Even though as ITS we have been denying it for more than three years, only recently we continue to be categorized as his “followers,” one can read evidence of this in the articles “NanoBombers: A Look at the Terrorist Group that’s trying to kill scientists”, from April 9, 2014, published on the New York web site “Vocativ”, and “As technology swamps our lives, the next Unabombers are waiting for their moment”, from May 13, 2014, published in the English periodical “The Telegraph”.