Actually Stealing From Companies Is Okay
Making a case for workplace theft, shoplifting, looting, and other forms of taking stuff from businesses 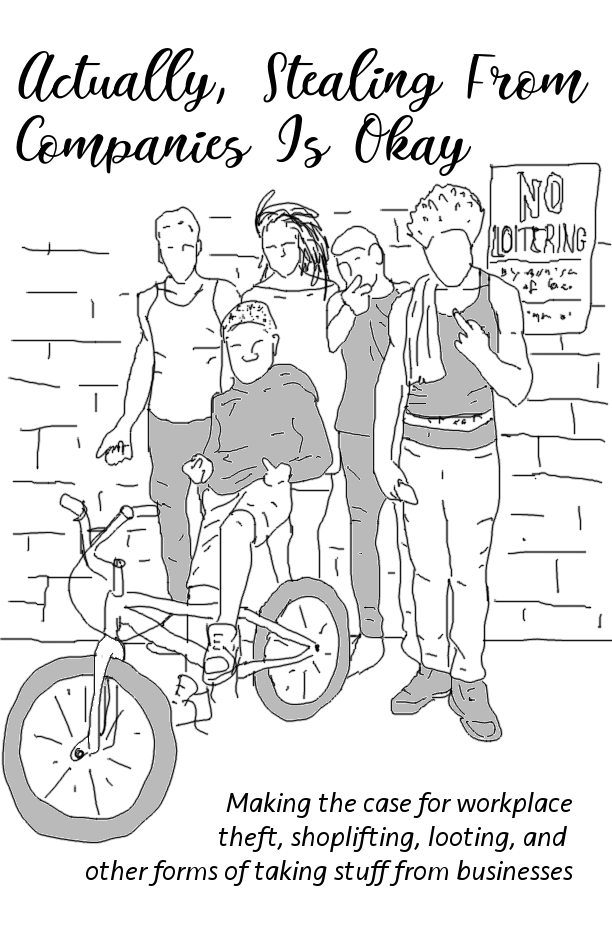 You’re reading this because you work too much and still eat and live like shit. Or maybe because you’ve given in to the feeling we all have — that having a job feels bad and you don’t really want to work that much...and you also eat and live like shit. You’ve been told all your life that criminals like you are bad people. I hope to convince you not to believe that and to stop playing a game you were designed to lose, or at least to cheat it a little. I think you’re worth it.

I steal because I’m hungry or need something I can’t afford comfortably or at all. I steal because some days I’m just bored and frustrated from either working on the clock or trying to prepare to clock back in (days off/ vacation) and it feels good. And I steal because I don’t have any real choices in most things I do in day to day life (work to pay for rent, feverishly try to decompress in my time off so I can be ready to go back to work, repeat) and stealing dumplings from Whole Foods might be the only thing I do today that was truly my own freely made decision.

Most people who would advocate theft might begin by reassuring you that stealing from businesses doesn’t hurt anybody. They would tell you that employees working for a wage don’t tend to see those wages influenced by product theft, and that most stores actually factor product loss into their budget so the store revenue itself is also barely affected at all by your theft. While those things are true, I’m not exactly that person. I WISH I could hurt or even inconvenience a company owner by taking some of his investments from him. If I could get back at even one of the bosses I’ve ever worked for through workplace theft, I would love to do that. Sadly though, at this point, things are so unfathomably overproduced, wealth is so unimaginably hoarded, and power is so terrifyingly concentrated, I could spend the rest of my life looting as much as my arms could carry and I would never be able to make my crimes pose even the smallest threat to a single lowgrade millionaire. And that’s the bad news.

The good news is, I do steal to survive, and because of that, I’ve given myself a life where I can wage work a little less than the average person and while I wouldn’t call myself “free” because of this, I have stolen time in my life that I use for more important things than either a job, or day-off-style leisure, both of which I don’t think make my life worth living.

I see tolerance as just a quiet, suppressed hatred in the same way that being deserving is just being softly restricted. I don’t want to DESERVE food, clothes, books, etc. I want to HAVE those things because I’m alive and because it’s available and the dumplings from Whole Foods taste good. I don’t want to be trained into gratitude for the opportunity to deserve food, like a pet.

Whether you’re a hard worker or a cheat (a good-poor or a bad-poor), you’re still the designated loser in the eyes of the game of law, work, economy, whatever. But that’s in THOSE eyes. In my eyes, you’re doing what you have to do to get by. I once talked to a houseless guy busking in the French Quarter who recalled living in New Orleans just after Katrina when he and a few other people from his neighborhood would periodically go out and loot (as many others famously did) what they and their neighbors might need to survive the hellscape that week. He told me his block thought of him as a hero and he probably did save or improve a few lives by taking what needed taking. Which is of course miserable in hindsight, given that now he lives as a homeless criminal, hated by upstanding citizens, policed by the police, etc. The law doesn’t ‘misunderstand’ what looting meant to Katrina survivors, I think it actually understood very well that theft is necessary for survival in that case. We are not experiencing a misunderstanding or a bad translation with law, we are experiencing a conflict with it. There is no state or economic power that needs truth spoken to it. What we want is on the other side of it, not within it.

The handful of often repeated arguments against taking things from businesses rely on a few hypothetical exceptions that get waved around like a weird fantasy flag. The most common hypothetical perfect victim is The Downtrodden Business Owner. The shitty-apartment-renting, poverty stricken, unpaid-bills-having business owner makes up such a tiny, barely visible percent of actual real life company owners, it actually pains me to give this strange desperate argument page space. Plus, if your definition of a victim has about $30,000 just lying around to startup a small business, we have very different definitions of a victim.

Regardless, the attempt to personify a company is so weird to me. A company isn’t human, it’s a series of investments made, often intended to turn around to create a profit margin which expands as you pay employees less and sell things for more money. So I mean, yeah I would prioritize a person having a meal or getting Advil over a company keeping one of its many investments on a shelf. That’s easy.

I really hate throwing numbers around in a piece like this because you can just do that on your own time, but I’ll data drop one thing here so we can be done with numbers and get on with it. The qualifying criteria for obtaining a Small Business Administration loan states that a small business is one with fewer than 500 employees and less than $7 million in annual sales. Also, the vast majority of this very small percentage of business owners you’re waving around like a mascot to represent your defense of investments are paying their hundred or so employees next to nothing an hour and working them to the bone, not that that totally makes a difference to my argument, but it’s worth mentioning if that’s what it takes to cut down a fictional argument tool.

Look, I’m not telling you what to do, if you walk into a store and think the owner has it worse than you, you can go snag your shit from a Walmart. I wouldn’t stop you. The small business owner anomaly that fits the downtrodden narrative will go out of business, almost guaranteed within the first year, and it will usually be because they just didn’t and couldn’t have the tools to compete with bigger companies selling the same thing. It’s bullshit to imagine a scenario where stolen eyeliner could be the straw that breaks any business camel’s back.

Unsurprisingly, I’m not going to attempt to split hairs between stealing for “need” and stealing for “want.” I’m not trying to claim that theft from businesses is ‘right’ (yo it totally is) and stealing from a company is a victimless crime (again, I wish it wasn’t). I think defining ‘need’ is a lot hazier than people with slogan-length talking points like to admit, especially given all the multitudes of ways poverty, or even just not being rich, is unbearable. It’s not just hunger and illness that makes living difficult -- modern living is also just extremely boring. To me, a need can be relaxation, a night out with a friend, a book, etc. People are more than just eating, shitting, sleeping machines and we do “need” more than food and shelter. Rather, I want to simplify my argument and say that company theft is good because paywalls are bad, full stop.

Company theft isn’t good “in the instance of ___” but is actually always fine because paywalls are always a punishment/reward tool and refusing to be trained by an economic system or state is empowering.

Unfortunately, we won’t often be able to opt out of the law and money game we’re trying to cheat. Some of us will get followed around stores because of the way we look. Some days, we’ll have to go to work so we can pay rent. We’ll have to use some of the rent money to fix a tire or go to the hospital and hope we have enough left over to not get evicted. But we’ll take what we can get, share when we can get it, and survive to pull other stunts.