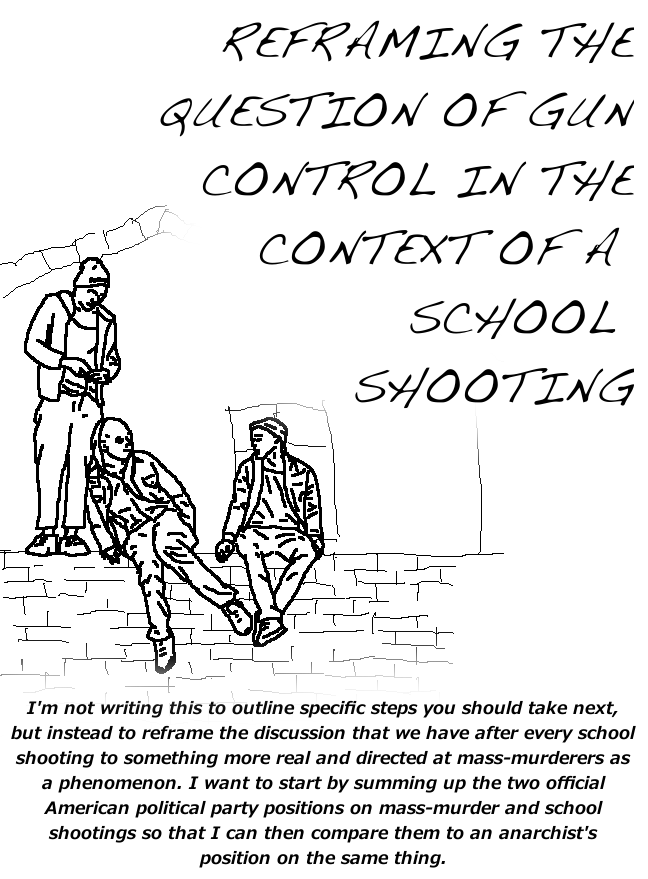 I'm not writing this to outline specific steps you should take next, but instead to reframe the discussion that we have after every school shooting to something more real and directed at mass-murderers as a phenomenon. I want to start by summing up the two official American political party positions on mass-murder and school shootings so that I can then compare them to an anarchist's position on the same thing.

So the two basic ready-made stances, as prepared by most media outlets fall under two opposing ideas:

1. "The constitution grants me rights to a gun to use for sport, defense against barbarians/ foreigners, and/ or defense against a future dystopic tyrannical (liberal?) government."

2. "Nobody should have a lethal weapon in their possession who isn't a trained law enforcer and therefore major gun reform should restrict our access to them."

The first position follows some assumptions about patriotism and a pure American ethic, a few narratives surrounding what is perceived to be the rebellious origins of the United States, and then some more narratives about freedom, heritage, and human nature. The second position also begins with a couple of faith-based assumptions, mainly regarding the good intentions and noble purpose of law enforcement, since they would be exempt from this gun critique. Similar to the conservative position, the liberal position starts by assuming that there is sometimes an unavoidable evil that spontaneously bubbles out of a person, with no traceable source or reason, and turns them into a school shooter. The basic difference between the two camps is the answer to the question "Who gets to shoot bad guys, cops or me?"

So if we follow each position to its conclusion we have two timelines: in a Democrat voter's United States, all school shooters are replaced with kids that wish they were school shooters, if only the government would let them buy the tools, which it won't. Those kids would (and in our current timeline, often do) become cops since cops can still legally use guns, and as we know, legally kill. In a Republican voter's United States, kids who want to become school shooters get to try, and theoretically get shot by a teacher, another student, or also maybe by a cop. Either way, both voters have started by accepting that some kids want to be school shooters and that's an unavoidable part of life.

In any media-constructed false dichotomy like this one, we have to imagine that a third position exists and that it rejects the terms of the question in the first place. I would argue that our position has to be that one, and it can't begin with "Mass murder is an unavoidable spontaneously occurring human desire" or end at "Who gets to shoot the bad guys?" That's because we haven't considered that school shooters aren't born, but instead are grown. School shooters are a product of schools that function like jails, media that functions like church, and nuclear family structures that function like cults.

I can only speak for myself when I say that I'm not a mystic and I don't believe that brains do unexplainable things. So now that that's out of the way, you should know that I reject the idea that an impulse can spontaneously bubble into a person's brain without conditioning. Before a kid decides to do mass murder, either because he hates black people, or Jews, or because women won't fuck him, or because he just has inexplicable hatred directed at everyone around him, he has to be conditioned.

I'm not going to claim that I understand exactly when or where in a classroom, on a news channel, or on a fishing trip with your dad's friends that the seed is planted. And I can't claim to fully understand the thought process that clicks into place that tells a brain what it needs to know about the worth of a human life that would enable a school shooter or any other kind of mass murderer. I will, however, say that all of us know that schools resemble prisons at worst and office buildings at best, in order to prepare kids to accept their shitty futures in one of the two, depending on your tax bracket. I did grow up in a household, like a lot of us did, that had the news on at least one T.V. at all times. I would see how they portrayed poverty-stricken criminals in this country, or people living in a country the US was dropping bombs on, as subhuman. I could go on, you get the idea.

I will say though, that I am interested in sharing an anti-mass-murder stance with both state sanctioned parties. I'm against mass murder via school shootings. I'm against the mass murder of 1,187 people formally murdered by police in 2017. I'm against the softer, less direct murder of 45,000 people (according to a study out of Harvard Medical School and Cambridge Health Alliance anyway, I'm sure it's higher) a year in this country due to denied access to medicine via poverty. And I'm against the mass murder of between 19 and 30 million people in wars the US has waged in Afghanistan, Angola, Democratic Republic of the Congo, East Timor, Guatemala, Indonesia, Pakistan, Sudan, during the Korean and Vietnam wars, and between two Iraq wars.

I think it's essential and right to be against mass murder and I'm suspicious of any claimed anti-mass-murder stance that thinks that it’s not a problem when it's done by cops, soldiers, or by artificial scarcity. I think you would have to believe that criminals, non-Americans, and poor people are less human to also believe that legal mass murder is an exception to your anti-mass-murder position. I think the imposed dichotomy between gun laws and no gun laws misses the point of any anti-mass-murder position which has got to first answer the question "Why does a mass-murderer decide to mass murder" and that we have to be genuinely interested in what the answer to that question is if we are going to claim to genuinely want solutions that can change more than just a law.

I believe that schools, as they are, are people-factories that breed the next generation of school shooters, army generals, cops, wife beaters, etc. I think we can create something better than what we now know of as schools, something that eliminates the line that modern schools draw between learning and living, for instance. I believe that nuclear families, as they are, promote isolation and foster some early and basic "us and them" thoughts that are dangerous. I think prisons should be abolished and people should no longer be policed and that our education system and other clunky institutions shouldn't operate with the intent to separate people into criminals and home-owners. I see that positions are taken by people after school shootings that non-coincidentally mirror exactly the positions of major news anchors and non-coincidentally only pose questions that risk keeping things basically the same. And I understand that it's tempting to reject the idea of fundamental change in favor of making some more laws, because that route doesn't require responsibility on our part over our own lives and it really is just an easier path of lesser resistance.

However, the standard response to any larger scale societal critique like this one (which is usually something between "that's not realistic" or charitably “Okay sure but I want to know what I can do NOW?") isn't necessarily a bad impulse. We should look at the situations we're in and mindfully act immediately. I've seen punks turn their music venues and communal houses into "Really Really Free Markets" that brought neighbors together after a workday, instead of splintering quietly off into their separate houses at 5:00 pm. I've seen kids raised with communal help that learn more empathy by 9 years old than I had at 19. I think we have to create different ways of relating to each other that doesn't begin and end with school bells or work schedules, and I think we do that by getting ahold of spaces to congregate in, expanding our families into networks of care and help, and sharing our lives with each other in ways that are truly dangerous to a government, a landlord or a boss. Whether your mass-murderer talking point is an amateur white supremacist, wears a badge, or holds office, I think the desire to become any one of those is planted in the anti-social home, to school, to prison/career pipeline and should be eliminated at the source. As corny as it sounds, I want to build bridges and take down walls because I think gaps and walls are the main ingredients in recipes for mass murder. I think the question of why kids become mass murderers is something that the gun reform framework can't and doesn't intend to answer. 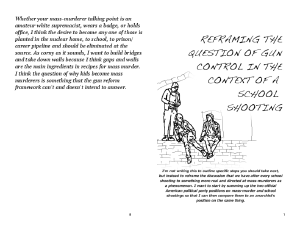